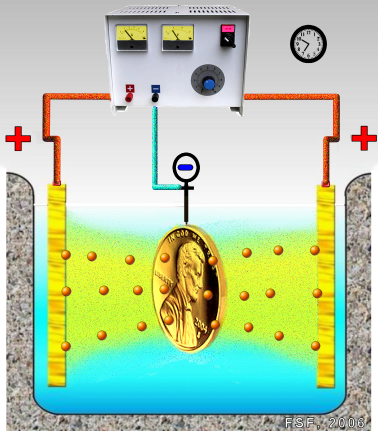 An example of a gold-plating cell.

Electroplating involves the coating of an electrically conductive object with a layer of metal using electrical current. Usually, the process is used to deposit an adherent surface layer of a metal having some desired property—such as abrasion and wear resistance, corrosion protection, lubricity, or improvement of aesthetic qualities—onto a substrate lacking that property. It is also used to build up the thickness of undersized parts.

The process used in electroplating is called electrodeposition and is analogous to a galvanic or electrochemical cell acting in reverse. The part to be plated is the cathode of the circuit, while anode is made of the metal to be plated on the part. Both these components are immersed into a solution containing one or more metal salts as well as other ions that permit the flow of electricity. A rectifier supplies a direct current to the cathode causing the metal ions in solution to lose their charge and plate out on the cathode. As the electrical current flows through the circuit, the anode slowly dissolves and replenishes the ions in the bath.[1]

On the contrary, other electroplating processes use a nonconsumable anode such as lead. In these situations ions of the metal to be plated must be periodically replenished in the bath as the plate forms out of the solution.[2]

The anode and cathode in the electroplating cell are connected to an external supply of direct current, a battery or, more commonly a rectifier. The anode is connected to the positive terminal of the supply, and the cathode (article to be "plated") is connected to the negative terminal. When the external power supply is switched on, the metal at the anode is oxidized from the zero valency state to form cations with a positive charge. These cations associate with the anions in the solution. The cations are reduced at the cathode to deposit in the metallic, zero valency state. Example: In an acid solution, Cu is oxidized from a copper anode to Cu2+ by losing two electrons. The Cu2+ associates with the anion SO42- in the solution to form copper sulfate. At the cathode, the Cu2+ is reduced to metallic Cu by gaining two electrons. The result is the effective transfer of Cu from the anode source to a plate covering the cathode.

The plating is most commonly a single metallic element, not an alloy. However, some alloys can be electrodeposited, notably brass and solder.

Many plating baths include cyanides of other metals (e.g., potassium cyanide) in addition to cyanides of the metal to be deposited. These free cyanides facilitate anode corrosion, help to maintain a constant metal ion level and contribute to conductivity. Additionally, non-metal chemicals such as carbonates and phosphates may be added to increase conductivity.

When plating is not desired on certain areas, stop-offs are applied to prevent the bath from coming in contact with the substrate. Typical stop-offs include tape, foil, lacquers, and waxes.[3]

Initially, a special plating deposit called a "strike" may be used to form a very thin (typically less than 0.5 mm thick) plating with high quality and good adherence to the substrate. This serves as a foundation for subsequent plating processes. A strike uses a high current density and a bath with a low ion concentration. The process is slow, so more efficient plating processes are used once the desired strike thickness is obtained.

The striking method is also used in combination with the plating of different metals. If it is desirable to plate one type of deposit onto a metal to improve corrosion resistance but this metal has inherently poor adhesion to the substrate, a strike can be first deposited that is compatible with both. One example of this situation is the poor adhesion of electrolytic nickel on zinc alloys, in which case a copper strike is used, which has good adherence to both.[4]

While most plating cells use a continuous direct current, some employ a cycle of eight to 15 seconds on followed by one to three seconds off. This allows high current densities to be used while still producing a quality deposit. In order to deal with the uneven plating rates that result from high current densities, the current is even sometimes reversed, causing some of the plating from the thicker sections to go back into solution. In effect, this allows the "valleys" to be filled without over-plating the "peaks." This is common on rough parts or when a bright finish is required.[5]

Brush electroplating has several advantages over tank plating, including portability, ability to plate items that for some reason can't be tank plated (one application was the plating of portions of very large decorative support columns in a building restoration), low or no masking requirements, and comparatively low plating solution volume requirements. Disadvantages compared to tank plating can include greater operator involvement (tank plating can frequently be done with minimal attention), and inability to achieve as great a plate thickness.

Electroplating is used in many industries for functional and decorative purposes. Some well-known examples are chrome-plating of steel parts on automobiles. Steel bumpers become more corrosion-resistant when they have been electroplated with first nickel and then chromium.

Hard chromium is used in services where frictional wear must be minimum, such as hydraulic pistons and camshaft bearing diameters.

Plain steel or aluminum parts in light fixtures glisten when they are electroplated with nickel and then decorated with chromium or brass.

Nickel, in the form of nickel sulfamate, is used to restore dimensions on worn parts, and as an under plate for hard chrome. The nickel sulfamate bath is unsuitable for decorative work.

Steel bolts last much longer because they are sold with a coating of zinc or cadmium that has been applied by electroplating. These electroplating and conversion coatings provide a double protection system for steel components. Virtually all types of steel can be protected including castings. Newly developed electrolytes and process methods are able to provide greatly increased corrosion prevention and brilliant finishes. Specially developed processes produce improved metal distribution over complex shapes. Alloy co-deposits offer extra performance.

Passivation processes (better known as conversion coatings) are usually applied to zinc and cadmium deposits to improve component life. These coatings used to be based on hexavalent chromium chemistry providing enhanced surface corrosion resistance but these have recently been superseded by trivalent chromium chemistry on both health and environmental grounds. In addition to the well known chromic conversion, there are blue, olive and black variants available to meet modern requirements. To guarantee a certain corrosion protection electroplated parts can be tested in standardized tests, such as salt spray test, Kesternich test, etc. Parts are corroded artificially in a testing cabinet, where minimum testing time is required before the apparition of rust.

Electroplating can be used to silver plate copper or brass electrical connectors, since silver tarnishes much more slowly and has a higher conductivity than those metals. The benefit of the silver is lower surface electrical resistance resulting in a more efficient electrical connection. Silver plating is also popular for RF connectors because radio frequency current flows primarily on the surface of its conductor; the connector will thus have the strength of brass and the conductivity of silver.

Low force/low voltage separable connectors used in telecommunications switchgear, computers, and other electronic devices are typically plated with gold or palladium over a barrier layer of nickel. The tail ends of these connectors, which are usually joined to the device by soldering, are plated with a tin/lead alloy, or pure tin.

Some scientists believe that artifacts found in Iraq which date from circa 200 B.C.E. are batteries and possibly used for electroplating. Other scientists are skeptical of this explanation. 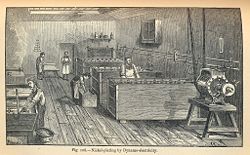 Modern electrochemistry was invented by Italian chemist Luigi V. Brugnatelli in 1805. Brugnatelli used his colleague Alessandro Volta's invention of five years earlier, the voltaic pile, to facilitate the first electrodeposition. Unfortunately, Brugnatelli's inventions were repressed by the French Academy of Sciences and did not become used in general industry for the following thirty years.

By 1839, scientists in Britain and Russia had independently devised metal deposition processes similar to Brugnatelli's for the copper electroplating of printing press plates. Soon after, John Wright of Birmingham, England discovered that potassium cyanide was a suitable electrolyte for gold and silver electroplating. Wright's associates, George Elkington and Henry Elkington were awarded the first patents for electroplating in 1840. These two then founded the electroplating industry in Birmingham England from where it spread around the world.

The plating industry received a big boost from the advent of the development of electric generators in the late 1800s. With the higher currents available metal machine components, hardware, and automotive parts requiring corrosion protection and enhanced wear properties, along with better appearance, could be processed in bulk.

Retrieved from https://www.newworldencyclopedia.org/p/index.php?title=Electroplating&oldid=1062094
Categories:
Hidden category:
This page was last edited on 29 December 2021, at 17:16.
Content is available under Creative Commons Attribution/Share-Alike License; additional terms may apply. See Terms of Use for details.