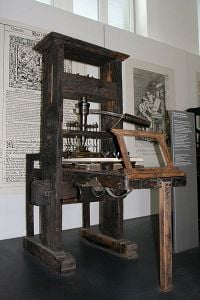 A printing press is a mechanical device to print many copies of text on a medium such as paper or cloth. The machine applies pressure to an inked surface resting on the medium, thereby transferring an image. Invention of the printing press has been attributed to various people, including Laurens J. Coster of the Netherlands and Panfilo Castaldi of Italy, but most scholars credit Johannes Gutenberg, a German goldsmith, with its invention.[1][2]

Both woodblock printing and movable type printing technologies had been developed in ancient China and Korea a few hundred years earlier, but their presses differed from that used by Gutenberg and their impact was limited. Printing methods based on Gutenberg's printing press spread rapidly first across Europe and then the rest of the world. Books became widely available and affordable, leading to a dramatic rise in the adult literacy rate throughout Europe. In addition, scientists and scholars were able to publish their discoveries and ideas and communicate with one another through scholarly journals. This development contributed to the coming of the scientific revolution.

Gutenberg's press was later replaced by a steam-powered machine, followed by the rotary printing press that allowed the printing of millions of copies of a page per day. As a means of creating reproductions for mass consumption, the printing press has recently been superseded by the advent of offset printing. 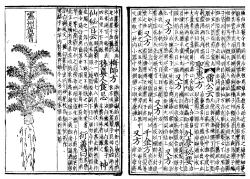 Finely crafted books, like the 1249 Song Dynasty Bencao (materia medica) shown here, were produced by woodblock in China as early as the ninth century.

The earliest form of printing, known as woodblock printing, appears to have originated in East Asia. In this technique, carved wooden blocks were pressed against sheets of paper to produce impressions on the paper. This method was used in China to print the Buddhist scripture known as the Diamond Sutra in the mid-ninth century CE.[2] Recently, another Buddhist scripture, dating to about 750 C.E., was discovered in a Korean pagoda and is regarded as the earliest known printed work in the world.[1]

The invention of printing with movable type has been attributed to Bi Sheng of China, who used clay type in 1041. Later, Wang Zhen produced wood type, which was more durable, and metal type was produced by members of the Korean Goryeo dynasty. The Jikji, printed in Korea in 1377, is the oldest extant book printed with movable metal type.[1]

The overall invention of Gutenberg's printing method depended for some of its elements on a combination of technologies from East Asia, including paper, woodblock printing, and possibly Bi Sheng's movable type printing technology. In addition, there was a growing demand by the general European public for the lower-cost paper books, instead of the exorbitantly expensive parchment books. By 1424, Cambridge University library owned only 122 books, each of which had a value equal to that of a farm or vineyard.[2] The demand for these books was driven by rising literacy among the middle class and students in Western Europe. At this time, the Renaissance was still in its early stages, and the populace was gradually removing the monopoly the clergy had held on literacy.

Although woodblock printing had arrived in Europe at approximately the same time paper did, this method was not as suitable for literary communication as it was in the East.[2] Block printing is well-suited to written Chinese because character alignment is not critical. On the other hand, the existence of over 5,000 basic characters made the Chinese movable type technology somewhat inefficient and economically impractical, in terms of profits for the ancient Chinese book publishers. Movable type offered a great advance for the West, because the Latin alphabet requires precise alignment of a much simpler character set.

In the development of the printing press, a key technological feature provided European inventors with advantage over their Chinese counterparts: the screw-based presses used in wine and olive oil production.[2] Attaining mechanical sophistication in approximately the year 1000 C.E., devices for applying pressure on a flat-plane were common in Europe.[3] 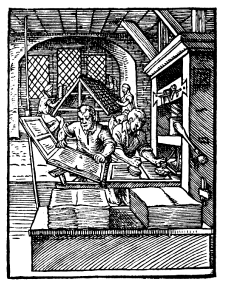 In this woodblock from 1568, the printer on the left is removing a page from the press, and the one on the right is inking the text-blocks.

Johannes Gutenberg's work on the printing press began in approximately 1436, when he partnered with Andreas Dritzehan—a man he had previously instructed in gem-cutting—and Andreas Heilmann, owner of a paper mill. It was not until a 1439 lawsuit against Gutenberg that official records exist, in which the testimony of witnesses discussed type, an inventory of metals (including lead), and his type mold.[2]

Others in Europe were developing movable type at this time, including goldsmith Procopius Waldfoghel of France and Laurens Janszoon Coster of the Netherlands. They are not known to have contributed specific advances to the printing press.[2][4]

Having previously worked as a professional goldsmith, Gutenberg made skillful use of the knowledge of metals he had learned as a craftsman. He was the first to make type from an alloy of lead, tin, and antimony, which was critical for producing durable type that produced high-quality printed books and proved to be more suitable for printing than the clay, wooden or bronze types invented in East Asia. To create these lead alloy types, Gutenberg used what some considered his most ingenious invention, a special matrix enabling the quick and precise molding of new type blocks from a uniform template.

Gutenberg is also credited with the introduction of an oil-based ink that was more durable than the earlier water-based inks. For printing material, he used both vellum and paper, the latter having been introduced in Europe a few centuries earlier from China by way of the Arabs.

In the Gutenberg Bible, Gutenberg performed a trial of colored printing for a few of the page headings, present only in some copies.[5] A later work, the Mainz Psalter of 1453, presumably designed by Gutenberg but published under the imprint of his successors Johann Fust and Peter Schöffer, had elaborate red and blue printed initials.

It should be noted that the alphabet made an important contribution to the success of the printing press.[6]

Although the invention of movable type in China and Korea preceded Gutenberg's printing press, the impact of East Asian movable type printing presses was not as dramatically influential as it was in Western European society. This was likely due to the enormous amount of labor involved in manipulating the thousands of porcelain tablets, or in the case of Korea, metal tablets, required for Chinese characters. Nevertheless, hundreds of thousands of books, on subjects ranging from Confucian Classics to science and mathematics, were printed using the older technology of woodblock printing, creating the world's first print culture.[7]

By contrast, the impact of Gutenberg's printing press in Europe was comparable to the development of writing, or the invention of the alphabet or the Internet, regarding its impact on society.[1] Just as writing did not replace speaking, printing did not achieve a position of total dominance, and handwritten manuscripts continued to be produced. However, the cost of books was drastically reduced, and many copies of each book became quickly available. The wider availability of printed materials led to a drastic rise in adult literacy rate throughout Europe.

The printing press became valuable for scientists and scholars, as it enabled them to publish their discoveries and ideas and communicate with one another through scholarly journals. This development contributed to the coming of the scientific revolution. Moreover, even as the printing press allowed for rapid production and distribution of information, it led to an awareness of the importance of authorship and the need to cite references accurately. Before the advent of the printing press, the author's name was often lost.[1]

Within about 50 or 60 years from the invention of the printing press, practically the entire classical canon had been reprinted and widely promulgated across Europe.[1] Now that more people had access to knowledge both new and old, more people could discuss these works. Furthermore, with the rise of book production as a commercial enterprise, the first copyright laws were passed to protect what we now call intellectual property rights.

An additional consequence of this popularization of knowledge was the decline of Latin as the language of most published works. Latin was replaced by the vernacular language of each area, increasing the variety of published works. Paradoxically, the printing word also helped unify and standardize the spelling and syntax of these vernaculars, thereby "decreasing" their variability. The rise in importance of national languages (as opposed to pan-European Latin) has been cited as one factor that led to the rise of nationalism in Europe. 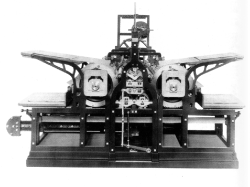 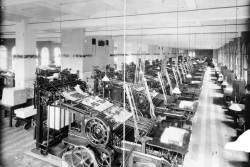 Given its usefulness and efficiency, the Gutenberg press remained nearly unchanged for more than 300 years. By 1800, Lord Stanhope had constructed a press completely from cast iron, reducing the force required by 90 percent while doubling the size of the printed area. Although Stanhope had improved the efficiency of the press, it was still capable of printing only 250 sheets per hour.[2]

German printer Friedrich Koenig became the first to design a non-manpowered machine, using steam power. Having moved to London in 1804, Koenig soon met Thomas Bensley and secured financial support for his project in 1807. Patented in 1810, Koenig had designed a steam press "much like a hand press connected to a steam engine."[2] The first production trial of this model occurred in April 1811. He produced his machine with assistance from German engineer Andreas Friedrich Bauer. It could make 1,100 impressions per hour.

In 1814, Koenig and Bauer sold a couple of their first models to The Times in London. They then improved on the model to get simultaneous, double-sided printing. These developments led to the mass-production of newspapers, which in turn led to a rise in literacy levels.[1] From the 1820s, the nature of book production also changed. Their company, Koenig & Bauer AG, remains one of the world's largest manufacturers of printing presses today.

In 1843, Richard M. Hoe of the United States invented the rotary printing press, allowing the printing of millions of copies of a page per day. Also, with the use of rolled paper, the speed of the presses was greatly enhanced.Around the same time, small, jobbing presses were developed to print small pieces such as business cards, envelopes, and letterheads. They could generate 1,000-1,500 impressions per hour.[1]

Later inventions in the field of printing have included the following: