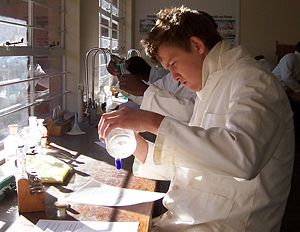 Some chemistry experiments can be conveniently carried out at room temperature.

Room temperature (also referred to as ambient temperature) is a common term to denote a certain temperature within enclosed space to which human beings are accustomed. Room temperature is thus often indicated by general human comfort, with the common range of 18°C (64°F) to 23°C (73°F), though differences in climate may acclimate people to higher or lower temperatures—for instance, 78°F could be a common temperature for some people.

The term may also refer to the temperature of food to be consumed (such as red wine), which is placed in a particular room for a given time. In addition, it may refer to a certain temperature within settings of scientific experiments and calculations.

For scientific calculations, room temperature is taken to be roughly 20 to 23.5 degrees Celsius, 528 to 537 degrees Rankine (°R), or 293 to 296 kelvins (K), with an average of 21 °C, about 72.8 degrees Fahrenheit (°F).[3] For numerical convenience, either 20 °C or 300 K is often used. However, room temperature is not a precisely defined scientific term as opposed to Standard Temperature and Pressure, which has several, slightly different, definitions.

The progress and results of many scientific and industrial processes depends a little or not at all on the temperature of the surroundings of the equipment. For example, a measurement of the charge of the electron does not depend upon the temperature of the test equipment. In such cases if any mention of temperature is made, it is customary and sufficient to speak simply of "room temperature," which essentially implies simply that what is being spoken of has not been specifically heated or cooled. Usually this means a temperature at which many people are comfortable, around 20 °C. In most cases, considerable temperature variations are irrelevant; work may be carried out in winter or summer without heating or air-conditioning, without mention of the temperature. However, productivity is dependent on thermal comfort.

Experimentalists have an advantage in anticipating aspects of a room-temperature experiment, because the temperature is close to 20 °C (68°F, 527.4 °R, 293 K), at which many of the material properties and physical constants in standards tables have been measured. By consulting such tables, a researcher may estimate, for example, how fast a chemical reaction is likely to proceed at room temperature.

Unless there is a reason to work at a specific temperature, it is clearly more convenient not to control the temperature. Even in cases where a known, controlled, temperature is advantageous but not essential, work may be carried out at room temperature. But, for example, very large, warehouse-type experimental facilities may lack sufficient heating and cooling capabilities to maintain 'room temperatures'.

An assumed typical ambient temperature may be used for general calculations; for example, the thermal efficiency of a typical internal combustion engine may be given as approximately 25 percent, with no mention of the air temperature: the actual efficiency will depend to some extent on ambient temperature, decreasing in extremely hot weather conditions due to lower air density.

Being an even less precise specification than "room temperature," "ambient temperature" may be a more correct description of the temperature. Because scientists strive for accuracy in their reports, many use this specification exclusively just as a matter of course, even to describe experiments that they could justifiably characterize as having been conducted at room temperature.

This is a nebulous issue, depending upon the language used. In many languages, for example Spanish, there is no expression for "room," as distinct from "ambient," temperature.

Arguably, no precision is lost in this practice: in disciplines where experimenters always work in laboratories, and where temperature differences of a few degrees make little difference with regard to the questions that scientists ask, the distinction between ambient and room temperature literally is not worth making. And, of course, the ambient temperature of a room is usually room temperature.

Yet small temperature differences have large effects on many natural processes. Therefore scientists who do observe a distinction between the two specifications may be sticklers about which one to apply. For example, heat given off by electronics or motors may warm the area around an experiment relative to the rest of a room. Under such circumstances, and depending on the question under investigation, some scientists would consider it inaccurate to report that an experiment took place at room temperature.