Indium (chemical symbol In, atomic number 49) is a rare, soft, malleable and easily fusible metal. It is chemically similar to aluminum and gallium, but it looks more like zinc. Zinc ores are also the primary source of this metal.

The primary application of indium is to make thin, transparent electrodes from indium tin oxide for liquid crystal displays (LCDs). It is also used as a semiconductor dopant, as a plating on metals and glass (for mirrors), as a light filter in sodium vapor lamps, and as a component in low-melting-temperature alloys. Several indium compounds are useful as semiconductors, and the oxide is good for making electroluminescent panels. In addition, indium, antimonide, and arsenide are used in infrared detectors. 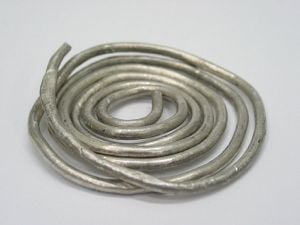 Indium is produced mainly from residues generated during zinc ore processing, but it is also found in iron, lead, and copper ores. The amount of indium consumed is largely a function of worldwide LCD production. Increased manufacturing efficiency and recycling (especially in Japan) maintain a balance between demand and supply. Demand increased as the metal is used in LCDs and televisions, and supply decreased when a number of Chinese mining concerns stopped extracting indium from their zinc tailings.

Up until 1924, there was only about one gram of isolated indium on the planet. The Earth is estimated to contain about 0.1 parts per million (ppm) of indium. This means it is about as abundant as silver, but indium is nearly three times more expensive by weight. Canada is a leading producer of indium. Worldwide production is typically over 300 metric tons per year, but demand has risen rapidly with the increased popularity of LCD computer monitors and television sets.

Indium was discovered by Ferdinand Reich and Hieronymous Theodor Richter in 1863, when they were testing zinc ores with a spectrograph in search of thallium. The element was named after the indigo line in its atomic spectrum. It is interesting to note that most elements were discovered while searching for other elements. Richter went on to isolate the metal in 1867.

In the periodic table, indium lies in group 13 (former group 3A), between gallium and thallium, and in the same group as aluminum. Consequently, its properties resemble those of these three elements. In addition, it is situated in period 5, between cadmium and tin. It is also said to be one of the "poor metals"—elements located between the transition metals and metalloids in the periodic table.

Indium is a very soft, silvery white metal, with a bright luster. As a pure metal, it emits a high-pitched "cry" when bent. This element and gallium are able to “wet” (coat) glass.

One unusual property of indium is that its most common isotope, 115In, is slightly radioactive—it decays very slowly by beta emission to tin. The estimated abundance of 115In is about 95.7%, while that of the stable isotope, 113In, is 4.3%.

The radioactivity of 115In is not considered hazardous, mainly because its decay rate is nearly 50,000 times slower than that of natural thorium, with a half-life of 4×1014 years. Also, indium is not a notorious cumulative poison, like its neighbor cadmium, and is relatively rare.

Numerous other radioactive isotopes of indium are known, but most of them are extremely short-lived.

The first large-scale application for indium was as a coating for bearings in high-performance aircraft engines during World War II. Later, production gradually increased as new uses were found in fusible alloys, solders, and electronics. In the middle and late 1980s, the development of indium phosphide semiconductors and indium-tin oxide thin films for liquid crystal displays (LCDs) aroused much interest. By 1992, the thin-film application had become the largest end use.

Other uses are as follows:

Pure indium in metallic form is considered nontoxic by most sources. In the welding and semiconductor industries, where exposure to indium and its compounds is relatively high, there have been no reports of any toxic side-effects. Yet, some sources maintain that indium has a low level of toxicity, and its compounds are highly toxic.[1]