Infrared astronomy is the branch of astronomy and astrophysics that studies objects as they would appear in the infrared (IR) region of the electromagnetic spectrum. Visible light ranges in wavelength between 400 nanometers (nm) (blue) and 700 nm (red). Wavelengths that are longer than 700 nm but shorter than microwaves are grouped as infrared radiation (or submillimeter waves). Scientists classify infrared astronomy as part of optical astronomy because optical components (mirrors, lenses and solid state digital detectors) are usually used.

Infrared astronomy has helped scientists gain better insights into processes that occur during the birth and death of stars, as well as to observe brown dwarfs, extrasolar planets, and other sub-stellar mass objects. It has also aided the examination of dust grains in the Milky Way and other galaxies. The field of IR astronomy has greatly benefited from the development of highly sensitive IR detectors, the establishment of large arrays on the ground, and the use of satellite technology. 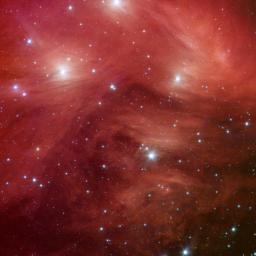 After Isaac Newton used prisms to split white light into a spectrum, William Herschel found in 1800 that the hottest part of the band of light from the Sun was actually past the red end of the spectrum. These "heat rays" were found to display some spectral lines. In 1856, Charles Piazzi Smyth detected infrared radiation in the light of the Moon. 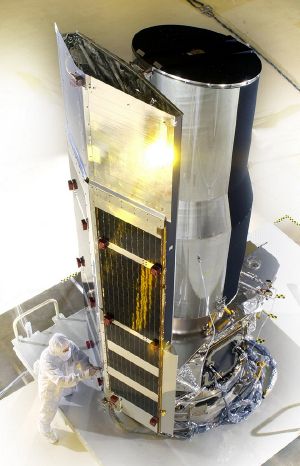 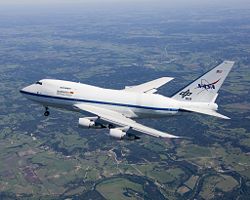 Near-infrared radiation (infrared radiation with wavelengths close to that of visible light) behaves in a manner very similar to visible light, and it can be detected using similar electronic devices. For this reason, the near-infrared region of the spectrum is commonly incorporated as part of the "optical" spectrum, along with the near-ultraviolet. (Most scientific instruments such as optical telescopes cover the near-infrared region as well as the visible region). The far infrared extends to submillimeter wavelengths, which are observed by telescopes such as the James Clerk Maxwell Telescope at Mauna Kea Observatory.

Like all other forms of electromagnetic radiation, infrared is utilized by astronomers to learn more about the universe. As infrared is essentially heat radiation, infrared telescopes (which include most major optical telescopes as well as a few dedicated infrared telescopes) need to have their detectors shielded from heat and chilled with liquid nitrogen in order to obtain images. This is particularly important in the mid-infrared and far-infrared regions of the spectrum.

The main limitation on infrared sensitivity from ground-based telescopes is that water vapor in the Earth's atmosphere absorbs a significant amount of infrared radiation. For this reason, most infrared telescopes are built in very dry places at high altitudes (above most of the water vapor in the atmosphere). Suitable locations on Earth include the Mauna Kea Observatory, situated at 4205 meters above sea level; the Atacama Large Millimeter Array (ALMA), at 5000 m in Chile; and high-altitude ice desert regions, such as Dome C in Antarctica.

Another way of doing infrared astronomy is by the use of airborne observatories, such as SOFIA (Stratospheric Observatory for Infrared Astronomy) and the Kuiper Airborne Observatory. By flying at high altitude (in the stratosphere), there is less water vapor between the telescope and objects in space, leading to a smaller IR absorption of the atmosphere. The residual IR background (due to the remaining absorption) is statically removed by applying a chopping reduction technique of the observed field and a blank region.

The cheapest infrared detectors commonly used at research telescopes are arrays of HgCdTe (mercury, cadmium, and tellurium). These operate well at wavelengths between one and five micrometers. For longer wavelength observations or higher sensitivity, other detectors may be used, including other narrow gap semiconductor detectors, low temperature bolometer arrays, or photon-counting Superconducting Tunnel Junction arrays.

Infrared space telescopes—such as the Spitzer Space Telescope, Infrared Astronomical Satellite (IRAS), Infrared Space Observatory (ISO), and the forthcoming Herschel Space Observatory—can observe across almost all of the infrared spectrum. However, most infrared astronomy continues to be carried out at ground-based telescopes, and these are limited to observations through a small number of spectral "windows," at wavelengths where the Earth's atmosphere is transparent. The main infrared windows are listed below:

Between these windows, there are generally regions where infrared observations are more difficult or impossible to conduct from the ground, due to the opacity of the atmosphere. Dedicated infrared and submillimeter telescopes are generally built at very high altitude sites, such as the Mauna Kea Observatory in Hawaii and the ALMA site in Chile. Some telescopes are flown on aircraft like SOFIA, providing the best sensitivity available from Earth-based observatories. Data from space-based observatories, such as Spitzer, IRAS, and ISO, help fill in the gaps between the atmospheric windows listed above.

Retrieved from https://www.newworldencyclopedia.org/p/index.php?title=Infrared_astronomy&oldid=1009463
Categories:
Hidden category:
This page was last edited on 3 March 2018, at 17:46.
Content is available under Creative Commons Attribution/Share-Alike License; additional terms may apply. See Terms of Use for details.