Tellurium (chemical symbol Te, atomic number 52) is a relatively rare chemical element that belongs to the group of metalloids—its chemical properties are intermediate between those of metals and nonmetals. Silvery in color, it looks like tin, but chemically it is more closely related to selenium and sulfur.

This element is primarily used in alloys. For instance, when added to lead, it enhances the metal's strength and durability; when alloyed with stainless steel and copper, it makes them more workable. When alloyed with both cadmium and mercury, it forms an infrared-sensitive semiconductor. In addition, it is used in ceramics, glasses, and blasting caps. Bismuth telluride is useful for thermoelectric devices, and cadmium telluride has potential applications in photovoltaic cells for solar power. When zinc is added to cadmium telluride, the product is extremely well-suited for use in solid-state detectors for X rays and gamma rays.

Yet, tellurium and its compounds should be considered toxic and need to be handled with care. Exposure to even small amounts of tellurium can generate a garlicky odor in one's breath, sweat, and urine. Additional symptoms of exposure to the element or its compounds (at relatively high concentrations) include headache, dyspnea, weakness, skin rash, a metallic taste in the mouth, and blue-black markings on the fingers, neck, face, and gums. Death may occur from pulmonary edema. A person exposed to tellurium compounds should be given medical attention.

In nature, tellurium is sometimes found in its elemental form, but it is more often found as the tellurides of gold and silver, such as the minerals calaverite, krennerite, petzite, and sylvanite. Tellurium compounds are the only chemical compounds of gold found in nature. Yet, unlike gold, tellurium itself is also found combined with other elements, forming metallic salts.

The principal source of tellurium is from anode sludges produced during the electrolytic refining of blister copper. In addition, it is a component of dusts from blast furnace refining of lead. Tellurium is produced mainly in the United States, Canada, Peru, and Japan.

Commercial-grade tellurium, which is not toxic if properly handled, is usually marketed as minus 200-mesh powder, but it is also available as slabs, ingots, sticks, and lumps.

Tellurium (from the Latin word tellus, meaning "earth") was discovered in 1782 by the Hungarian Franz-Joseph Müller von Reichenstein (Müller Ferenc) in Transylvania. Another Hungarian scientist, Pál Kitaibel, discovered the element independently in 1789, but he later gave the credit to Müller. It was named in 1798 by Martin Heinrich Klaproth who had isolated it earlier.

The 1960s brought growth in thermoelectric applications for tellurium, as well as its use in free-machining steel, which became the dominant use. 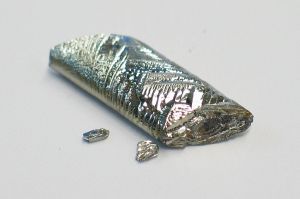 In the periodic table, tellurium is located in group 16 (formerly group 6A), between selenium and polonium. Along with sulfur, selenium, and polonium, it is a member of the oxygen family of elements, also called the chalcogens. In addition, it lies in period five, between antimony and iodine.

In its pure and crystalline state, tellurium has a silvery-white color and a metallic luster. When the element is precipitated from a solution of tellurous acid (H2TeO3) or telluric acid (H6TeO6), it appears to have an amorphous form. There is, however, some debate whether this form is really amorphous or composed of minute crystals.

Tellurium is brittle and can be easily pulverized. When burned in air, it produces a greenish-blue flame and forms tellurium dioxide. In its molten state, the element is corrosive toward copper, iron, and stainless steel.

Tellurium is a P-type semiconductor. Its conductivity, which is higher in certain directions, increases slightly on exposure to light. It can be doped with various metals, including tin, copper, silver, and gold.

There are 30 known isotopes of tellurium, with atomic masses ranging from 108 to 137. Naturally occurring tellurium consists of eight isotopes (listed in the table on the right), three of which are radioactive. Among all its radioactive isotopes, 128Te has the longest half-life (2.2×1024 years).

Tellurium can form a variety of compounds. Some examples are given below.

Tellurium and its compounds should be considered toxic and need to be handled with care. A person exposed to as little as 0.01 milligrams (or less) of tellurium per cubic meter of air develops "tellurium breath," which has a garlicky odor. The same smell is also present in sweat and urine. The body metabolizes tellurium in any oxidation state, converting it to dimethyl telluride. This product is volatile and smells like garlic.

Exposure to tellurium or its compounds can also cause headache, dyspnea, weakness, skin rash, and a metallic taste in the mouth. In addition, it can produce bluish-black markings on the fingers, neck, face, and gums. Death may occur from pulmonary edema. People exposed to tellurium compounds should receive medical attention.