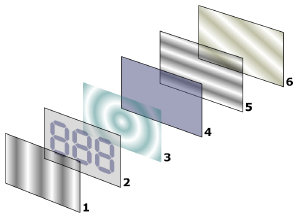 Layers of a reflective twisted nematic liquid crystal display:
1. Vertical filter film to polarize the light as it enters.
2. Glass substrate with indium tin oxide (ITO) electrodes. The shapes of these electrodes will determine the dark shapes that will appear when the LCD is turned on. Vertical ridges are etched on the surface so the liquid crystals are in line with the polarized light.
3. Twisted nematic liquid crystals.
4. Glass substrate with common electrode film (ITO) with horizontal ridges to line up with the horizontal filter.
5. Horizontal filter film to block/allow through light.
6. Reflective surface to send light back to viewer.

A liquid crystal display (LCD) is a thin, flat display device made up of any number of color or monochrome pixels arrayed in front of a light source or reflector. It is prized by engineers because it uses very small amounts of electric power, and is therefore suitable for use in battery-powered electronic devices.

Liquid crystal displays are one of the reasons laptop computers have been so successful. Without this creation, we could not have the compactness for portable computers. Some of the earlier portable computers included a small CRT monitor and were rather bulky. In the future, LCDs will be used more, not only for computers but also for HD televisions. As technology and production becomes less expensive, the cost of a flat screen computer monitor or a HD television will keep going down. It is quite possible that eventually LCDs will completely replace the traditional CRT, just as the transistor replaced the vacuum tube. 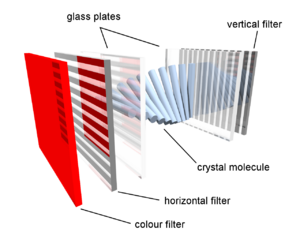 A subpixel of a color LCD

When a voltage is applied across the electrodes, a torque acts to align the liquid crystal molecules parallel to the electric field, distorting the helical structure (this is resisted by elastic forces since the molecules are constrained at the surfaces). This reduces the rotation of the polarization of the incident light, and the device appears gray. If the applied voltage is large enough, the liquid crystal molecules are completely untwisted and the polarization of the incident light is not rotated at all as it passes through the liquid crystal layer. This light will then be polarized perpendicular to the second filter, and thus be completely blocked and the pixel will appear black. By controlling the voltage applied across the liquid crystal layer in each pixel, light can be allowed to pass through in varying amounts, correspondingly illuminating the pixel.

With a twisted nematic liquid crystal device it is usual to operate the device between crossed polarizers, such that it appears bright with no applied voltage. With this setup, the dark voltage-on state is uniform. The device can be operated between parallel polarizers, in which case the bright and dark states are reversed (in this configuration, the dark state appears blotchy).

Both the liquid crystal material and the alignment layer material contain ionic compounds. If an electric field of one particular polarity is applied for a long period of time, this ionic material is attracted to the surfaces and degrades the device performance. This is avoided by applying either an alternating current, or by reversing the polarity of the electric field as the device is addressed (the response of the liquid crystal layer is identical, regardless of the polarity of the applied field).

When a large number of pixels is required in a display, it is not feasible to drive each directly since then each pixel would require independent electrodes. Instead, the display is multiplexed. In a multiplexed display, electrodes on one side of the display are grouped and wired together (typically in columns), and each group gets its own voltage source. On the other side, the electrodes are also grouped (typically in rows), with each group getting a voltage sink. The groups are designed so each pixel has a unique, unshared combination of source and sink. The electronics, or the software driving the electronics then turns on sinks in sequence, and drives sources for the pixels of each sink.

1911: Charles Mauguin describes the structure and properties of liquid crystals.

Pioneering work on liquid crystals was undertaken in the late 1960s by the UK's Royal Radar Establishment at Malvern. The team at RRE supported ongoing work by George Gray and his team at the University of Hull who ultimately discovered the cyanobiphenyl liquid crystals (which had correct stability and temperature properties for application in LCDs).

The first operational LCD was based on the Dynamic Scattering Mode (DSM) and was introduced in 1968 by a group at RCA in the United States, headed by George Heilmeier. Heilmeier founded Optel, which introduced a number of LCDs based on this technology.

In December 1970, the twisted nematic field effect in liquid crystals was filed for patent by M. Schadt and W. Helfrich, then working for the Central Research Laboratories of Hoffmann-LaRoche in Switzerland (Swiss patent No. CH532261). James Fergason at Kent State University filed an identical patent in the U.S. in February 1971.

In 1971 the company of Fergason ILIXCO (now LXD Incorporated) produced the first LCDs based on the TN-effect, which soon superseded the poor-quality DSM types due improvements of lower operating voltages and lower power consumption.

In 2005 Mary Lou Jepsen developed a new type of LCD display for the One Laptop Per Child project to reduce power consumption and manufacturing cost of the Children's Machine. This display uses a plastic diffraction grating and lenses on the rear of the LCD to illuminate the colored subpixels. This method absorbs very little light, allowing for a much brighter display with a lower powered backlight. Replacing the backlight with a white LED allows for reduced costs and increased durability as well as a wider color gamut.

In color LCDs, each individual pixel is divided into three cells, or subpixels, which are colored red, green, and blue, respectively, by additional filters (pigment filters, dye filters and metal oxide filters). Each subpixel can be controlled independently to yield thousands or millions of possible colors for each pixel. Older CRT monitors employ a similar method.

Color components may be arrayed in various pixel geometries, depending on the monitor's usage. If software knows which type of geometry is being used in a given LCD, this can be used to increase the apparent resolution of the monitor through subpixel rendering. This technique is especially useful for text anti-aliasing. 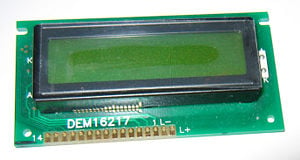 A general purpose alphanumeric LCD, with two lines of 16 characters

LCDs with a small number of segments, such as those used in digital watches and pocket calculators, have a single electrical contact for each segment. An external dedicated circuit supplies an electric charge to control each segment. This display structure is unwieldy for more than a few display elements.

Small monochrome displays such as those found in personal organizers, or older laptop screens have a passive-matrix structure employing supertwist nematic (STN) or double-layer STN (DSTN) technology (DSTN corrects a color-shifting problem with STN). Each row or column of the display has a single electrical circuit. The pixels are addressed one at a time by row and column addresses. This type of display is called a passive matrix because the pixel must retain its state between refreshes without the benefit of a steady electrical charge. As the number of pixels (and, correspondingly, columns and rows) increases, this type of display becomes less feasible. Very slow response times and poor contrast are typical of passive-matrix LCDs.

High-resolution color displays such as modern LCD computer monitors and televisions use an "active matrix" structure. A matrix of thin-film transistors (TFTs) is added to the polarizing and color filters. Each pixel has its own dedicated transistor, allowing each column line to access one pixel. When a row line is activated, all of the column lines are connected to a row of pixels and the correct voltage is driven onto all of the column lines. The row line is then deactivated and the next row line is activated. All of the row lines are activated in sequence during a refresh operation. Active-matrix displays are much brighter and sharper than passive-matrix displays of the same size, and generally have quicker response times, producing much better images.

Twisted nematic displays contain liquid crystal elements that twist and untwist at varying degrees to allow light to pass through. When no voltage is applied to a TN liquid crystal cell, the light is polarized to pass through the cell. In proportion to the voltage applied, the LC cells twist up to 90 degrees changing the polarization and blocking the light's path. By properly adjusting the level of the voltage almost any grey level or transmission can be achieved.

3LCD is a video projection system that uses three LCD microdisplay panels to produce an image. It was adopted in 1995 by numerous front projector manufacturers and in 2002 by rear projection TV manufacturers for its compactness and image quality.

The 3LCD website describes the technology in detail and is supported by various companies including 3LCD manufacturers and vendors.

In-plane switching is an LCD technology that aligns the liquid crystal cells in a horizontal direction. In this method, the electrical field is applied through each end of the crystal, but this requires two transistors for each pixel instead of the one needed for a standard thin-film transistor (TFT) display. Before Enhanced IPS (e-IPS) was introduced in 2009, the additional transistors resulted in blocking more transmission area, thus requiring a brighter backlight and consuming more power, making this type of display less desirable for notebook computers. Following the introduction of e-IPS, other forms of IPS were developed, including S-IPS, H-IPS, and P-IPS, with even better response times and color reproduction. Currently, IPS panels are generally considered the best overall LCD technology for image quality, color accuracy, and viewing angles. 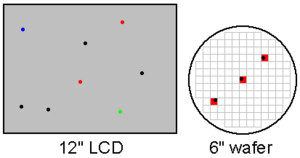 Examples of defects in LCD displays

LCD panels are more likely to have defects than most ICs due to their larger size. In this example, a 12-inch SVGA LCD has eight defects and a six-inch wafer has only three defects.

LCD panels also have defects known as clouding (or lmura), which describes the uneven patches of changes in luminance. It is most visible in dark or black areas of displayed scenes.

The zenithal bistable device (ZBD), developed by QinetiQ (formerly DERA), can retain an image without power. The crystals may exist in one of two stable orientations (Black and "White") and power is only required to change the image. ZBD Displays is a spin-off company from QinetiQ who manufacture both grayscale and color ZBD devices.

A French company, Nemoptic, has developed another zero-power, paper-like LCD technology that has been mass-produced in Taiwan since July 2003. This technology is intended for use in low-power mobile applications such as e-books and wearable computers. Zero-power LCDs are in competition with electronic paper.

LCD technology still has a few drawbacks in comparison to some other display technologies: