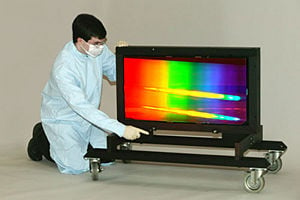 In optics, a diffraction grating is an optical component with a regular pattern, which splits (diffracts) light into several beams travelling in different directions. The directions of these beams depend on the spacing of the grating and the wavelength of the light so that the grating acts as a dispersive element. Because of this, gratings are commonly used in monochromators and spectrometers.

A photographic slide with a fine pattern of black lines forms a simple grating. For practical applications, gratings generally have grooves or rulings on their surface rather than dark lines. Such gratings can be either transparent or reflective. Gratings which modulate the phase rather than the amplitude of the incident light are also produced, frequently using holography.

The principles of diffraction gratings were discovered by James Gregory, about a year after Newton's Prism experiments, initially with artifacts such as bird feathers. The first man-made diffraction grating was made around 1785 by Philadelphia inventor David Rittenhouse, who strung hairs between two finely threaded screws. This was similar to notable German physicist Joseph von Fraunhofer's wire diffraction grating in 1821.

The relationship between the grating spacing and the angles of the incident and diffracted beams of light is known as the grating equation.

When a wave propagates, each point on the wavefront can be considered to act as a point source, and the wavefront at any subsequent point can be found by adding together the contributions from each of these individual point sources.

An idealized grating is considered here which is made up of a set of long and infinitely narrow slits of spacing d. When a plane wave of wavelength λ, is incident normally on the grating, each of the point slits in the grating acts as a set of point sources which propagate in all directions. The light in a particular direction, θ, is made up of the interfering components from each slit. Generally, the phases of the waves from different slits will vary from one another, and will cancel one another out partially or wholly. However, when the path difference between the light from adjacent slits is equal to the wavelength, λ, the waves will all be in phase. This occurs at angles θm which satisfy the relationship dsinθm/λ=|m| where d is the separation of the slits and m is an integer. Thus, the diffracted light will have maxima at angles θm given by

It is straightforward to show that if a plane wave is incident at an angle θi, the grating equation becomes

The light that corresponds to direct transmission (or specular reflection in the case of a reflection grating) is called the zero order, and is denoted m = 0. The other maxima occur at angles which are represented by non-zero integers m. Note that m can be positive or negative, resulting in diffracted orders on both sides of the zero order beam.

Gratings can be made in which various properties of the incident light are modulated in a regular pattern; these include

The grating equation applies in all these cases.

The wavelength dependence in the grating equation shows that the grating separates an incident polychromatic beam into its constituent wavelength components, i.e., it is dispersive. Each wavelength of input beam spectrum is sent into a different direction, producing a rainbow of colors under white light illumination. This is visually similar to the operation of a prism, although the mechanism is very different.

A light bulb of a flashlight seen through a transmissive grating, showing three diffracted orders. The order m = 0 corresponds to a direct transmission of light through the grating. In the first positive order (m = +1), colors with increasing wavelengths (from blue to red) are diffracted at increasing angles.

The diffracted beams corresponding to consecutive orders may overlap, depending on the spectral content of the incident beam and the grating density. The higher the spectral order, the greater the overlap into the next order.

The grating equation shows that the angles of the diffracted orders only depend on the grooves' period, and not on their shape. By controlling the cross-sectional profile of the grooves, it is possible to concentrate most of the diffracted energy in a particular order for a given wavelength. A triangular profile is commonly used. This technique is called blazing. The incident angle and wavelength for which the diffraction is most efficient are often called blazing angle and blazing wavelength. The efficiency of a grating may also depend on the polarization of the incident light. Gratings are usually designated by their groove density, the number of grooves per unit length, usually expressed in grooves per millimeter (g/mm), also equal to the inverse of the groove period. The groove period must be on the order of the wavelength of interest; the spectral range covered by a grating is dependent on groove spacing and is the same for ruled and holographic gratings with the same grating constant. The maximum wavelength that a grating can diffract is equal to twice the grating period, in which case the incident and diffracted light will be at ninety degrees to the grating normal. To obtain frequency dispersion over a wider frequency one must use a prism. In the optical regime, in which the use of gratings is most common, this corresponds to wavelengths between 100 nm and 10 µm. In that case, the groove density can vary from a few tens of grooves per millimeter, as in echelle gratings, to a few thousands of grooves per millimeter.

Originally, high-resolution gratings were ruled using high-quality ruling engines whose construction was a large undertaking. Henry Joseph Grayson designed a machine to make diffraction gratings, succeeding with one of 120,000 lines to the inch (approx. 47 000 per cm) in 1899. Later, photolithographic techniques allowed gratings to be created from a holographic interference pattern. Holographic gratings have sinusoidal grooves and may not be as efficient as ruled gratings, but are often preferred in monochromators because they lead to much less stray light. A copying technique allows high quality replicas to be made from master gratings, thereby lowering fabrication costs.

Another method for manufacturing diffraction gratings uses a photosensitive gel sandwiched between two substrates. A holographic interference pattern exposes the gel which is later developed. These gratings, called volume phase holography diffraction gratings (or VPH diffraction gratings) have no physical grooves, but instead a periodic modulation of the refractive index within the gel. This removes much of the surface scattering effects typically seen in other types of gratings. These gratings also tend to have higher efficiencies, and allow for the inclusion of complicated patterns into a single grating. In older versions of such gratings, environmental susceptibility was a trade-off, as the gel had to be contained at low temperature and humidity. Typically, the photosensitive substances are sealed between two substrates which make them resistant to humidity, thermal and mechanical stresses. VPH diffraction gratings are not destroyed by accidental touches and are more scratch resistant than typical relief gratings.

Semiconductor technology today is also utilized to etch holographically patterned gratings into robust materials as fused silica. In this way, low stray-light holography is combined with the high efficiency of deep, etched transmission gratings, and can be incorporated into high volume, low cost semiconductor manufacturing technology.

A new technology for grating insertion into integrated photonic lightwave circuits is digital planar holography (DPH). DPH gratings are generated in computer and fabricated on one or several interfaces of an optical waveguide planar with standard micro-lithography or nano-imprinting methods, compatible with mass-production. Light propagates inside the DPH gratings, confined by the refractive index gradient, which provides longer interaction path and greater flexibility in light steering. 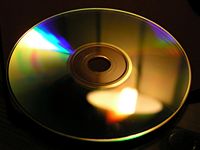 The grooves of a compact disc can act as a grating and produce iridescent reflections.

Ordinary pressed CD and DVD media are every-day examples of diffraction gratings and can be used to demonstrate the effect by reflecting sunlight off them onto a white wall. This is a side effect of their manufacture, as one surface of a CD has many small pits in the plastic, arranged within concentric rings; that surface has a thin layer of metal applied to make the pits more visible. The structure of a DVD is optically similar, although it may have more than one pitted surface, and all pitted surfaces are inside the disc.

In a standard pressed vinyl record when viewed from a low angle perpendicular to the grooves, a similar but less defined effect to that seen in a CD/DVD. This is due to viewing angle (less than the critical angle of reflection of the black vinyl) and the path of the light being reflected due to this being changed by the grooves, leaving a rainbow relief pattern behind.

The image sensor of a digital camera has a fine pattern which can produce a diffraction artifact on the image.

Diffraction gratings are also present in nature. For example, the iridescent colors of peacock feathers, mother-of-pearl, butterfly wings, and some other insects are caused by very fine regular structures that diffract light, splitting it into its component colors.

Retrieved from https://www.newworldencyclopedia.org/p/index.php?title=Diffraction_grating&oldid=1074485
Categories:
This page was last edited on 29 July 2022, at 03:50.
Content is available under Creative Commons Attribution/Share-Alike License; additional terms may apply. See Terms of Use for details.