Lisa del Giocondo (June 15, 1479 – July 15, 1542, or c. 1551), born and also known as Lisa Gherardini and Lisa di Antonio Maria (Antonmaria) Gherardini, also known as Lisa and Mona Lisa, was a member of the Gherardini family of Florence and Tuscany in Italy. Her name was given to Mona Lisa, her portrait commissioned by her husband and painted by Leonardo da Vinci during the Italian Renaissance.

Little is known about Lisa's life. Born in Florence and married as a teenager to a cloth and silk merchant who later became a local official, she was mother to six children and led what is thought to have been a comfortable and ordinary middle-class life. Lisa outlived her husband, who was considerably her senior.

Centuries after Lisa's death, Mona Lisa became the world's most famous painting[1] whose scope far exceeded that of Lisa, the woman. Speculation by scholars and hobbyists made the work of art a globally recognized icon and an object of commercialization. During the early 21st century, Lisa was definitively identified as the subject of the Mona Lisa. 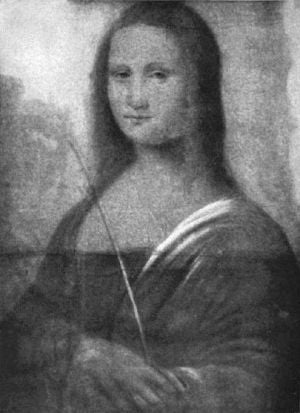 At the time of the Quattrocento, Florence was among the largest cities in Europe, considered rich and economically successful. Life was not "idyllic" for all residents though, among whom there were great disparities in wealth.[2] Lisa's family was old and aristocratic but over time had lost its influence.[3] They were comfortable but not wealthy, living on a farm income.

Antonmaria di Noldo Gherardini, Lisa's father, lost two wives, Lisa di Giovanni Filippo de Carducci, whom he married in 1465, and Caterina Rucellai, whom he married in 1473. Both died in childbirth.[4] Lisa's mother was Lucrezia del Caccia, daughter of Piera Spinelli and Gherardini's wife by his third marriage in 1476.[4] Gherardini at one time owned or rented six farms in Chianti that produced wheat, wine and olive oil and where livestock was raised.[5]

Lisa was born in Florence on June 15, 1479 on Via Maggio,[6] although for many years it was thought she was born on one of the family's rural properties, Villa Vignamaggio just outside Greve.[7] She is named for Lisa, a wife of her paternal grandfather.[8] The eldest of seven children, Lisa had three sisters, one of whom was named Ginevra, and three brothers, Giovangualberto, Francesco, and Noldo.[9]

The family lived in Florence, originally near Santa Trinita and later in rented space near Santo Spirito, most likely because they were not able to afford repairs to their former house when it was damaged. Lisa's family moved to what today is called Via dei Pepi and then near Santa Croce, where they lived near Ser Piero da Vinci, Leonardo's father.[10] They also owned a small country home in St. Donato in the village of Poggio about 32 kilometers (20 mi) south of the city.[11] Noldo, Gherardini's father and Lisa's grandfather, had bequeathed a farm in Chianti to the Santa Maria Nuova hospital. Gherardini secured a lease for another of the hospital's farms, and so that he could oversee the wheat harvest, the family spent summers there at the house named Ca' di Pesa.[12]

On March 5, 1495, Lisa married Francesco di Bartolomeo di Zanobi del Giocondo, a modestly successful cloth and silk merchant, becoming his second wife at age 15. Lisa's dowry was 170 florins and the San Silvestro farm near her family's country home, a sign that the Gherardini family was not wealthy at the time and reason to think she and her husband loved each other.[13] The property lies between Castellina and San Donato in Poggio, near two farms later owned by Michelangelo.[10] Neither poor nor among the most well-to-do in Florence, the couple lived a middle-class life. Lisa's marriage may have increased her social status because her husband's family may have been richer than her own.[13] Francesco is thought to have benefited because Gherardini is an "old name".[14] They lived in shared accommodation until March 5, 1503, when Francesco was able to buy a house next door to his family's old home in the Via della Stufa. Leonardo is thought to have begun painting Lisa's portrait the same year.[15] [16] Central Florence. Francesco and Lisa lived on Via della Stufa (red), about 1 kilometer (0.6 mi) north of the Arno River. Lisa's parents lived closer to the river, at first north and later south (purple).

Lisa and Francesco had five children: Piero, Camilla, Andrea, Giocondo, and Marietta, four of them between 1496 and 1507.[17] Lisa also raised Bartolomeo, the son of Francesco and his first wife, Camilla di Mariotto Rucellai, who was about age one year when his mother died. Lisa's stepmother, Caterina di Mariotto Rucellai, and Francesco's first wife were sisters, members of the prominent Rucellai family.

Camilla and Marietta became Catholic nuns. Camilla took the name Suor Beatrice and entered the convent of San Domenico di Cafaggio, where she was entrusted to the care of Antonmaria's sister, Suor Albiera and Lisa's sisters, Suor Camilla (who was not chaste and was acquitted in a scandalous visitation by four men at the convent) and Suor Alessandra.[18] Beatrice died at age 18[18] and was buried in the Basilica di Santa Maria Novella.[19] Lisa developed a relationship with Sant'Orsola, a convent held in high regard in Florence, where she was able to place Marietta in 1521. Marietta took the name Suor Ludovica and became a respected member of the convent in a position of some responsibility.[20]

Francesco became an official in Florence. He was elected to the Dodici Buonomini in 1499 and to the Signoria in 1512, where he was confirmed as a Priori in 1524. He may have had ties to Medici family political or business interests. In 1512 when the government of Florence feared the return of the Medici from exile, Francesco was imprisoned and fined 1,000 florins. He was released in September when the Medici returned.[21][19]

In one account, Francesco died in the plague of 1538. Lisa fell ill and was taken by her daughter Ludovica to the convent of Sant'Orsola, where she died about four years later at the age of 63.[22] [23]

In June 1537 in his will among many provisions, Francesco returned Lisa's dowry to her, gave her personal clothing and jewelry and provided for her future. Upon entrusting her care to their daughter Ludovica and, should she be incapable, his son Bartolomeo, Francesco wrote, "Given the affection and love of the testator towards Mona Lisa, his beloved wife; in consideration of the fact that Lisa has always acted with a noble spirit and as a faithful wife; wishing that she shall have all she needs…." [24]

Lisa del Giocondo has come to be known throughout the ages because of her portrait painted by Leonardo da Vinci. 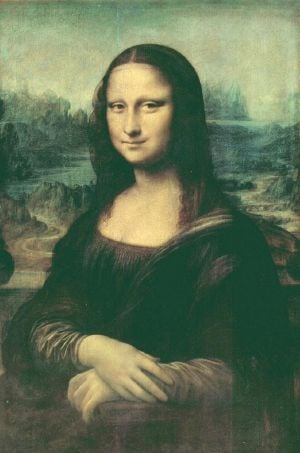 Like other Florentines of their financial means, Francesco's family were art lovers and patrons. His son Bartolommeo asked Antonio di Donnino Mazzieri to paint a fresco at the family's burial site in the Basilica della Santissima Annunziata di Firenze. Andrea del Sarto painted a Madonna for another member of his family.[19] Francesco gave commissions to Leonardo for a portrait of his wife and to Domenico Puligo for a painting of Saint Francis of Assisi. He is thought to have commissioned Lisa's portrait to celebrate both Andrea's birth and the purchase of the family's home.[16]

Mona Lisa fulfilled fifteenth- and early sixteenth-century requirements for portraying a woman of virtue. Lisa is portrayed as a faithful wife through gesture–her right hand rests over her left. Leonardo also presented Lisa as fashionable and successful, perhaps more well-off than she was. Her dark garments and black veil were Spanish-influenced high fashion; they are not a depiction of mourning for her first daughter, as some scholars have proposed. The portrait is strikingly large; its size is equal to that of commissions acquired by wealthier art patrons of the time. This extravagance has been explained as a sign of Francesco and Lisa's social aspiration.[25] 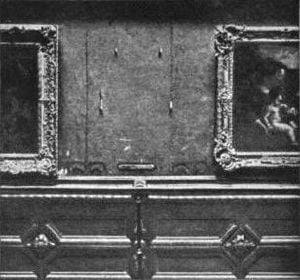 The theft of the Mona Lisa from the Louvre in 1911 and its travels to Asia and North America during the 1960s and 1970s contributed to the painting's iconization and fame.

Leonardo had no income during the spring of 1503, which may in part explain his interest in a private portrait.[26][21] But later that year, he most likely had to delay his work on Mona Lisa when he received payment for starting The Battle of Anghiari, which was a more valuable commission and one he was contracted to complete by February 1505.[27] In 1506 Leonardo considered the portrait unfinished.[28] He was not paid for the work and did not deliver it to his client.[29] The artist's paintings traveled with him throughout his life, and he may have completed Mona Lisa many years later in France,[14] in one estimation by 1516.[30]

The painting's title dates to 1550. An acquaintance of at least some of Francesco's family,[11] Giorgio Vasari wrote, "Leonardo undertook to paint, for Francesco del Giocondo, the portrait of Mona Lisa, his wife" [28] (Italian: Prese Lionardo a fare per Francesco del Giocondo il ritratto di mona Lisa sua moglie).[31] The portrait's Italian (La Gioconda) and French (La Joconde) titles are Lisa's married name as well as nickname[14]—in English, "jocund" or "the happy one."

By the end of the twentieth century, the painting was a global icon that had been used in more than 300 other paintings and in 2,000 advertisements, appearing at an average of one new advertisement each week.[39] In 2005, an expert at the University Library of Heidelberg discovered a margin note in the library's collection that established with certainty the traditional view that the sitter was Lisa.[40] The people of France have owned the Mona Lisa since the French Revolution.[41]

Today about 6 million people visit the painting each year at the Louvre in Paris, where it is part of a French national collection.[42] [43]