Samoa, is part of an archipelago in the South Pacific Ocean formerly known as the Navigators' Islands — a reference to Samoan seafaring skills. There are two Samoas—the Independent State of Samoa, known simply as Samoa, which is the subject of this article, and American Samoa, which is about 80 kilometers (50 miles) to the southeast. Samoan people tend to be friendly and welcoming, and live in a family centered and deeply Christian culture.

Samoa is located east of the International Date Line and south of the Equator, about halfway between Hawaii and New Zealand. The total land area of Samoa is nearly 3,000 km² (1,860 miles2), consisting of the two large islands of Upolu and Savai'i, which account for 96 percent of the total land area, and eight small islets. While all of the islands have volcanic origins, only Savai'i has had recent eruptions and could be considered volcanically active. The last major eruption occurred in the 1700s and smaller eruptions in the early twentieth century. The highest point in Samoa is Mauga Silisili at 1,858 m (6,131 feet). The main island of Upolu is home to nearly three-quarters of Samoa's population, and its capital city is Apia. The climate is tropical with the average annual temperature of 26° C (78° F), and a rainy season from November to April.

The first Polynesians to arrive in the Samoan islands came island-hopping, over several generations, from Southeast Asia more than four thousand years ago. From there, they migrated east toward the Society Islands, north towards Hawaii, and southwest towards New Zealand.

Samoa enjoys a rich history, preserved in folklore and myth, of ocean voyages, conquests of other islands, and war with the Kingdom of Tonga and Fiji. A temple found in the island of Manono has a system of stone cairns, which is believed to be a record of over 150 wars. Until about 1860, Samoa was ruled by tribal chiefs known as matai.

The first European to sight the islands was a Dutchman, Jacob Roggeveen, in 1722. The first European visitors remarked on the presence of a large fleet of canoes around Samoa. The French explorer Louis Antoine de Bougainville called Samoa’s islands "the Navigators' Islands." In 1830 the Reverend John Williams brought the Christian gospel to Savai'i. Samoans were perceived as savage and warlike. They clashed with French, German, British, and American soldiers, who later valued Samoa as a refueling station for coal-fired shipping. 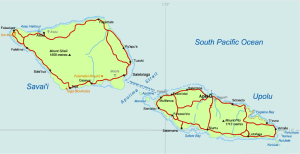 Halfway through the nineteenth century, the U.K., Germany, and the U.S. all claimed parts of the Kingdom of Samoa and established trade posts. A brief struggle after King Malietoa Laupepa’s death in 1898 led to the three powers agreeing to divide the islands in the Samoa Tripartite Convention. The western part, containing Upolu and Savai'i and other adjoining islands, became known as German Samoa. The U.S. accepted Tutuila and Manu'a. The monarchy was disestablished.

From 1908, with the establishment of the Mau ("opinion") movement, Western Samoans began to assert their claim to independence.

Shortly after the outbreak of World War I, in 1914, a New Zealand expeditionary force occupied German Samoa. Under the 1919 Treaty of Versailles, Germany dropped its claims to the islands and New Zealand administered Western Samoa first as a League of Nations mandate and then as a United Nations trusteeship until the country received its independence in 1962, as Western Samoa, the first Polynesian nation to re-establish independence in the twentieth century.

In 1997, the constitution was amended to change the country's name from Western Samoa to Samoa. The neighboring U.S. territory of American Samoa protested the move, feeling that the change diminished its own Samoan identity. American Samoans still use the terms "Western Samoa" and "Western Samoans."

In 2002, New Zealand Prime Minister Helen Clark formally apologized to Samoa for three actions taken by the New Zealand administration between 1918 and 1929. They included allowing the ship Talune, carrying passengers infected with influenza, to dock in Apia, resulting in the deaths of eight thousand Samoans (nearly 20 percent of the population); shooting non-violent protestors in 1929; and banishing Samoan leaders and stripping them of their chiefly titles.

The 1960 constitution is based on the British pattern of parliamentary democracy, blended with Samoan customs. The judicial system is also a blend of English common law and local customs. Two paramount chiefs were given lifetime appointments to hold the office of head of state jointly, while a third became its first prime minister. Malietoa Tanumafili II has held the post of head of state alone since the death of his colleague in 1963. His successor will be selected by the legislature for a five-year term.

The legislature, or Fono, contains 49 members. Forty-seven are elected from territorial districts by ethnic Samoans; the other two are chosen by non-Samoans on separate electoral rolls. Suffrage is universal but only chiefs (matai) may stand for election to the Samoan seats. There are more than 25,000 matais in the country, about five percent of whom are women.

The Samoan economy has depended on development aid, family remittances from overseas, agriculture, and fishing. The country is vulnerable to devastating storms. The decline of tuna fish stocks is a problem.

Agriculture employs two-thirds of the labor force of about 90,000 people, and furnishes 90 percent of exports. Due to variations in altitude, a large range of tropical and subtropical crops can be cultivated, but land is not generally available to outside interests so cultivation is limited. Of the total land area, about 24 percent of it is in permanent cultivation and another 21 percent is arable. About 4 percent belongs to the Western Samoan Trust Estates Corporation (WSTEC).

Tourism is expanding. The Samoan government has called for deregulation of the financial sector, encouragement of investment, and continued fiscal discipline, while at the same time protecting the environment.

Coffee grows well but production has been uneven. WSTEC is the biggest coffee producer. Rubber has been produced in Samoa for many years, but its export value has little impact on the economy. Sugar cane production was established by the Germans in the early twentieth century but did not continue. Pineapples grow well in Samoa, but have not been a big export item.

In the late 1960s, U.S. company Potlatch Forests upgraded the harbor and airport at Asau on the northern coast of Savai'i and established Samoa Forest Products for harvesting tropical hardwoods. Potlatch invested in a state-of-the-art sawmill and to develop power, water, and roads over several years. But Potlatch departed, leaving Asau a ghost town.

Samoa is a deeply religious country with an ancient Samoan belief in aitu (spirits). Christianity is the main religion. Members of the Bahá'ís are a small but important minority. In addition to Malietoa Tanumafili II being a Bahá'í, Samoa hosts one of only seven Bahá'í Houses of Worship in the world. 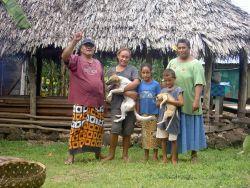 The Fa'a Samoa, or traditional Samoan way, remains a strong force in Samoan life and politics. Fa'a Samoa consists of aiga (the family), tautala Samoa (the Samoan language), gafa (genealogies), matai (the chiefly system), lotu (the church), and fa'alavelave (ceremonial and other family obligations). Associated are the values of alofa (love), tautua (service), fa'aaloalo (respect), feagaiga (a covenant between siblings and others) and usita'i (discipline). The aiga, or extended family, lives and works together. Elders in the family are greatly respected and hold the highest status.

They have a communal way of life with little privacy. The traditional fales (houses) have no walls. Blinds made of coconut leaves are used during the night or bad weather. Up to 20 people may sleep on the ground in the same fale. During the day the fale is used for chatting and relaxing.

Sundays are a day of rest, and many families congregate to share a traditional Sunday umu (a meal cooked in a rock oven). In a traditional household, the older members of the family will sit and eat first, and as the meal continues the younger join in. Coconut appears in many Samoan dishes, for example palusami, a parcel of corned beef, breadfruit, onions, taro leaves wrapped in breadfruit leaves and coconut cream and baked in the umu. This is eaten in its entirety including the leaves.

Samoan handicrafts include the siapo (equivalent to the Fijian tapa), which is made from beaten mulberry bark, with patterns or pictures of fish, turtles, hibiscus flowers painted on with a natural brown dye. The siapo may be used for clothing, for wrapping objects, and even simply for decorative reasons. Kava bowls are sturdy, round wooden bowls made of varying sizes, and have many short legs around it.

Kava, a ground natural extract from the pepper plant root with medicinal and slightly anesthetic properties, is made up with water in the bowl and drunk socially using coconut shells.

The traditional Samoan dance is the siva. This is similar to the Hawaiian dance, with gentle movements of the hands and feet in time to music and which tells a story.

The traditional ladies clothing is the puletasi, which is a matching skirt and tunic with Samoan designs. The lava lava is a sarong that may be worn by men or women. They are of different patterns and colors, but tend to be plain for men who may wear it as part of an official uniform. Some men have intricate and geometrical patterns tattooed onto their lower body and upper legs. The tattooing process is performed without any anesthesia and is said to be painful.

Canoes have been a feature of Samoan culture. The double war canoe, or alia, built with a deck joining two large canoes together, could hold 300 or more men. The last alia to float in Samoan waters is preserved as a tourist attraction. Canoes are used extensively. Some are large enough to carry whole families; some are streamlined to catch tuna. Some are light enough for one person to carry it.

The link between Samoa and New Zealand meant that by 2001, about 115,000 people of Samoan ethnicity were living in New Zealand (most were born in New Zealand). Large-scale migration began in the 1950s and continued for 30 years as New Zealand's industry and the service sector expanded. Although entry was restricted, regulations were not enforced until the New Zealand economy declined after 1973. Dawn raids on the homes of alleged overstayers began in 1974. Politicians blamed Pacific Islanders for overloading social services. In 1982 the Citizenship (Western Samoa) Act granted citizenship to Samoan-born New Zealanders. Since 2002, 1,100 Samoans may be granted residence each year.

Samoans have contributed to New Zealand music. Some have excelled in an array of sports. Boxers include Jimmy Peau and David Tua, who contested the heavyweight championship of the world. The discus thrower Beatrice Faumuina was twice a Commonwealth Games gold medalist, and became world champion in 1997.