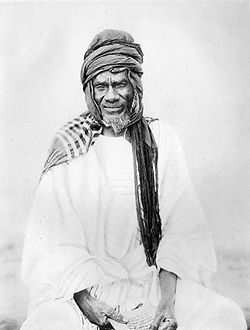 Samory with the Qur'an in his hands

Known as a gifted commander, Samory led his people in strong resistance to French expansionism in West Africa in the 1880s. At its height, his kingdom reached from Fouta Djallon in the east to the Upper Volta region in the west.

Taken captive by French forces in September 1898, Samory died in captivity in June 1900 from complications of pneumonia.

Born in 1830 in Manyambaladugu (in what is now southeastern Guinea), the child of Dyula traders who raised and traded cattle, Samory Touré experienced West Africa being transformed by growing contacts with Europeans. Particularly in the area of religion, western Africa experienced dramatic change during Samory's lifetime, and extensive travel in western Africa from 1846-1851 allowed Samory to examine religious changes in West Africa, leading him to rediscover the Islamic faith of his childhood and become a proponent for the spread of Islam.

In addition, military revolutions swept across western Africa in the nineteenth century, creating a political environment focused on militaristic dominance as an expression of power. As a result of the political climate induced by the sharp rise in the West African slave trade during the eighteenth century, Samory's mother was captured in the course of war by Séré-Burlay, of the Cissé clan in 1848. After arranging his mother's freedom, Samory engaged himself in the service of the Cissés where he learned the handling of arms. According to tradition, he remained "seven years, seven months, seven days" before fleeing with his mother. The increased access to firearms that allowed for the capture of Samory's mother, when coupled with Samory's training in service to free his mother, provided the tools for Samory's future rise as a military leader.

He then joined the Bérété army, the enemy of the Cissé, for two years before rejoining his people, the Kamara. Named Kélétigui ("war chief") at Dyala in 1861, Samory took an oath to protect his people against both the Bérété and the Cissé. He created a professional army and placed close relations, notably his brothers and his childhood friends, in positions of command.

Expansion through the Sudan

Samory's ultimate rise to power was facilitated by the death in 1864 of El Hadj Umar Tall, the founder of the aggressive Toucouleur Empire that dominated the Upper Niger River area. As the Toucouleur state lost its grip on power and its tight political control of the Upper Niger River Valley began to fade, the situation was ripe for a forceful young leader like Samory to enter the political fray and deal the final blow to the aging Toucouleur Empire.

A mere three years after the death of El Hadj Umar Tall, in 1867, Samory became a full-fledged war chief. He was the commander of his own army, centered in the city of Sanankoro located in the Guinea Highlands on the Upper Milo River, a Niger tributary. Posed to fill the power vacuum created by El Hadj Umar Tall's death, Samory understood that he needed to accomplish two things: first to create an efficient, loyal fighting force equipped with modern firearms, and secondly to build a stable state of his own.

Samory's first goal was to train a strong fighting force that would have all the advantages of modern firearms. By 1876 Samory was able to import breech-loading rifles through the British colony of Sierra Leone. He faced financial difficulty, however, in the further outfitting of his army and conquered the Buré gold mining district (now on the border between Sierra Leone and Guinea) to bolster his financial situation. With enough funds to support an army of well–trained, well–supplied fighters, he proclaimed himself faama (military leader) of his own Wassoulou Empire in 1878. He made Bissandugu his capital and began political and commercial exchanges with the neighboring Toucouleur.

Samory's struggles for political power did not end with the formation of the Wassoulou Empire, however, and he began to focus on expansion. In 1879, after numerous struggles, Samory was able to secure control of the key Dyula trading center of Kankan, on the upper Milo River. Kankan was a center for the trade in kola nuts, and was well situated to dominate trade routes in all directions. Control of the Dyula trading center of Kankan allowed Samori to exercise dominance over vital trade routes in the area and gain profits through control of the marketplace. Expansion of the Wassoulou Empire reached a high point in 1881, when Wassoulou extended through Guinea and Mali, from what is now Sierra Leone to northern Côte d'Ivoire.

Samory's expansionist objectives focused on expanding his political prowess through geographical, not cultural, dominance and he allowed most conquered people to maintain their organizations and traditions. Exceptions to this policy are found in his relationship with local animist populations, which he forced to convert to Islam. His religious convictions became more pronounced with his rise to power and in 1884 took the title of Almany, commander of believers. This same year, he also besieged and took the city of Falaba, then capital of Solimana.

While Samory conquered the numerous small tribal states around him, he also moved to secure his diplomatic position. He opened regular contacts with the British in Sierra Leone, and built a working relationship with the Fulani (Fula) jihad state of Fouta Djallon. To cement his fledging diplomatic relationship with Fouta Djallon, Samory sold slaves to Djallonese traders in exchange for cattle, horses, and, most importantly, French rifles.

Samory's army was well equipped with European firearms and acted through a complex structure of permanent units. His sofas (Mandinka for infantry) numbered between 30,000 to 35,000 men complimented by about three thousand cavalry. Infantry were divided into units of ten to 20 men known as a kulu (meaning “heaps”). Kulus were under the command of a Kun-Tigui (chief). Ten Kulus equaled a bolo (100-200 men), which translates to arm. The bolo kun-tigui commanded this unit. Cavalry were divided into bands of 50 horsemen, called a sere. The bolo and sere fought alongside each other in most engagements.

First battles with the French

France began to expand aggressively in West Africa in the late 1870s, pushing eastward from Senegal in an attempt to reach the upper portions of the Nile in what is now Sudan. They also sought to drive southeast to link with their bases in Côte d'Ivoire. These moves put them directly into conflict with Samory's expansionist policies and military forces.

The inevitable conflict between the political agendas of Samory and the French interests occurred in February 1882, when a French expedition attacked one of Samory’s armies besieging Kenyeran. Samori was able to drive the French off, but he was alarmed at the discipline and firepower of the European military.

Samory attempted to deal with the French in several ways. First, he expanded southwestward to secure a line of communication with Liberia. In January of 1885 he sent an embassy to Freetown, the capital of Sierra Leone, offering to put his kingdom under British protection. The British were not interested in confronting the French at this time, but they did allow Samory to buy large numbers of modern repeating rifles.

Armed with the British-supplied rifles, Samory stood in a strong position in 1885 when French expedition under Col. A. V. A. Combes attempted to seize the Buré gold fields, an important stronghold for Samory. Unwilling to surrender the valuable land, Samory led a counterattack against the French forces. Dividing his army into three mobile columns, he worked his way around the French lines of communication, forcing them to withdraw in haste.

By 1887, Samory had a well–armed, disciplined army of 30,000-35,000 infantry, organized into platoons and companies on the European model, and three thousand cavalry, in regular squadrons of 50 each. The size of his army, however, proved to be inadequate in the face of French expansion. Their expansion into his territory was significantly aided by French movements to exploit the rebellions of several of his animist subject tribes; the French continued to expand into his westernmost holdings, forcing Samory to sign several treaties ceding territory to them between 1886 and 1889.

In March 1891, a French force under Col. Archinard launched a direct attack on Kankan. Knowing his fortifications could not stop French artillery, Samory began a war of maneuver, in which he counted on speed and dexterity to defeat his opponent. Despite victories against isolated French columns (for example at Dabadugu in September 1891), Samory failed to push the French from the core of his kingdom. In June 1892, Col. Archinard’s replacement, Humbert, leading a small, well-supplied force of hand–picked men, captured Samory’s capital of Bissandugu. In another blow, the British stopped selling breechloaders to Samory in accordance with the Brussels Convention of 1890, limiting his access to the firearms necessary to maintain military conflict.

Samory moved his entire base of operations eastward, toward the Bandama and Comoe. He instituted a scorched earth policy, devastating each area before he evacuated it. Though this maneuver cut him off from his last source of modern weapons, Liberia, it also delayed French pursuit.

Nonetheless, the fall of other resistance armies, particularly Babemba Traoré at Sikasso, permitted the colonial army to launch a concentrated assault against Touré. He was captured on the upper reaches of the Cavally River on September 29, 1898 by French Commandant Goudraud and exiled to Gabon.

Samory died in captivity on June 2, 1900, following a bout of pneumonia.

Massa Makan Diabaté's play Une hyène à jeun (“A Hyena with an Empty Stomach,” 1988) dramatizes Samory Toure's signing of the 1886 Treaty of Kéniéba-Koura, which granted the left bank of the Niger River to France.

Retrieved from https://www.newworldencyclopedia.org/p/index.php?title=Samory&oldid=1023961
Categories:
Hidden category:
This page was last edited on 31 August 2019, at 21:14.
Content is available under Creative Commons Attribution/Share-Alike License; additional terms may apply. See Terms of Use for details.