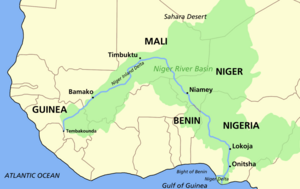 The Niger River is the principal river of western Africa, extending over 2,500 miles (about 4,180 km). It runs in a crescent through Guinea, Mali, Niger, on the border with Benin and then through Nigeria, discharging through a massive delta, known as the Oil Rivers, into the Gulf of Guinea. The Niger is the third longest river in Africa, exceeded only by the Nile and the Congo Rivers (also known as the Zaïre River). Its main tributary is the Benue River.

About a thousand years ago, in the prime years of the Mali Empire, traders brought gold by pirogue down the Niger from Ghana to Timbuktu, whence it was carried by camel to Tripoli and Alexandria. But the Arab traders were following even more ancient routes that existed before the Sahara was a desert.

In the early nineteenth century, Seku Amadu founded a Massina Empire in the Inland Delta region, building a capital at Hamdullahi in 1820. The Massina fell to El Hadj Umar Tall's Toucouleur Empire in 1862, which in turn fell to the French army. The region became a part of the country of Mali on its independence in 1960.

The Portuguese arrived at the Niger Delta on the coast in 1473. By the seventeenth century, coastal trade had supplanted the trans-Saharan trade, mostly dealing in slaves. During the years when the slave trade flourished, nearly half the total number of slaves exported from Africa came from the Niger delta, which came to be known as the "Slave Coast." 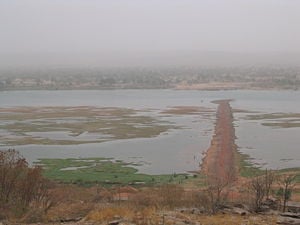 The origin of the name Niger is unknown. It is often assumed that it derives from the Latin word for "black," Niger, but there is no evidence for this, and it would have been more likely for Portuguese explorers to have used their own word, negro or preto, as they did elsewhere in the world. In any case the Niger is not a black water river.

The name is thus thought to be indigenous, but no convincing origin has been found among the thirty languages of the Niger delta and lower reaches of the river. One hypothesis is that it comes from the Tuareg phrase gher n gheren ("river of rivers," shortened to ngher), originating in the middle reaches of the river around Timbuktu.

The nations of Nigeria and Niger are named after the river. The people who live along it have a variety of names for it, notably Jeliba in Manding, Isa Ber ("big river" in Songhay), Joliba (a Mandigo word meaning “great river”), and Kworra or Quorra. The Niger was known in its lower reaches by the last name before its identity with the upper river was established. The Romans had heard of the Niger and called it Dasibari.

Mud houses on the center island at Lake Debo, a wide section of the Niger River

The Niger River is a relatively clear river, carrying only a tenth as much sediment as the Nile because the Niger's headlands are located in ancient rocks that provide little silt. Like the Nile, the Niger floods yearly; this begins in September, peaks in November, and finishes by May.[1]

The Niger takes one of the most unusual routes of any major river, a boomerang shape that baffled European geographers for two millennia. Its source is just 150 miles (240 kilometers) inland from the Atlantic Ocean, but the river runs away from the sea into the Sahara Desert, then takes a sharp right turn and heads southeast to the Gulf of Guinea.

Romans thought that the river near Timbuktu was part of the Nile River (e.g., Pliny, N.H. 5.10), a belief also held by Ibn Battuta, while early seventeenth-century European explorers thought that it flowed west and joined the Senegal River. The true course was probably known to many locals, but Westerners only established it in the late nineteenth century; it was first mentioned in the book Travels in the Interior of Africa by the Scottish explorer Mungo Park, who traveled up the river in the 1790s.

This strange geography apparently came about because the Niger River is two ancient rivers joined together. The upper Niger, from the source past the fabled trading city of Timbuktu to the bend in the current river, once emptied into a now-gone lake, while the lower Niger started in hills near that lake and flowed south into the Gulf of Guinea. As the Sahara dried up in 4000-1000 B.C.E., the two rivers altered their courses and joined together (this explanation is generally accepted, although some geographers disagree).

The northern part of the river, known as the "Niger bend," is an important area because it is the closest major river and source of water to the Sahara Desert. This made it the focal point of trade across the western Sahara and the center of the Sahelian kingdoms of Mali and Gao.

Even in 1796, when Mungo Park reached the Niger, he described the city of Segou thus: "(T)he numerous canoes upon the river; the crowded population, and the cultivated state of the surrounding country, formed altogether a prospect of civilization and magnificence."

An unusual feature of the river is the Niger Inland Delta, which forms where its gradient suddenly decreases. The result is a region of braided streams, marshes, and lakes in Mali; the seasonal floods make the delta extremely productive for both fishing and agriculture.[2] Also known as the Macina, it is located in the middle course of the Niger River, between the bifurcated Niger and its tributary, the Bani. Cities such as Mopti, Sévaré, and Djenné lie in the 400 kilometer-long region.

The Fulani and Dogon inhabit the Macina region and the surrounding area. During the wet season, the swamp floods into a lake and naturally irrigates the land. When the dry season comes, the Macina turns into a network of lakes and channels. Cattle, millet, and rice are its important agricultural products. The Inland Delta also provides water and fish for the Malians living there. However, due to its proximity to the ever-widening Sahel, there have been concerns that the Macina may be getting less rain every year.

The Niger Delta is a densely populated region in Nigeria sometimes called the Oil Rivers because it was once a major producer of palm oil. The area was the British Oil Rivers Protectorate from 1885 until 1893, when it was expanded and became the Niger Coast Protectorate.

As defined by the Nigerian government, the Delta extends over about 70,000 square kilometers and makes up 7.5 percent of Nigeria’s landmass. It includes land in Abia State, Akwa Ibom State, Bayelsa State, Cross River State, Delta State, Edo State, Imo State, Ondo State, and Rivers State. Some twenty million people of more than forty ethnic groups, speaking some 250 dialects, live in the Delta, with the Ijaw being the majority. Their livelihoods are primarily based on fishing and farming.

Coincidentally, in modern times Nigeria has become Africa's biggest producer of petroleum, including many oil wells in the Oil Rivers. Some two million barrels a day are extracted in the Niger Delta. Since 1975, the region has accounted for more than 75 percent of Nigeria's export earnings. Much of the natural gas extracted in oil wells in the Delta is immediately burned, or flared, into the air at a rate of approximately 2.5 billion cubic feet per day. This is equivalent to 40 percent of African natural gas consumption and forms the single largest source of greenhouse gas emissions on the planet. The environmental devastation associated with the industry and the lack of distribution of oil wealth have been the source and/or key aggravating factors of numerous environmental movements and inter-ethnic conflicts in the region, including recent guerrilla activity by the Movement for the Emancipation of the Niger Delta (MEND).

The Niger River is often referred to as the pulse of West Africa. Communities living within the basin are heavily reliant on the environmental products and services provided by the river and its surrounding area for their livelihoods.

The Niger River Basin, stretching from the highlands of Guinea down to the delta in Nigeria provides vital stopover sites for millions of migratory birds. The river itself supports 243 fish species (including 20 endemic species).[3]

The Niger Basin Authority is an intergovernmental organization in West Africa aiming to foster cooperation in managing and developing the resources of the Niger River Basin.

Niger Basin Authority members are: Benin, Burkina Faso, Cameroon, Chad, Côte d'Ivoire, Guinea, Mali, Niger and Nigeria. It is based in Niamey and works in both French and English.