The Republic of Chad is a landlocked country in central Africa. Though it has started exporting oil, these bright prospects are marred by widespread corruption, serious human rights abuses, a government intent on remaining in power, and rebellions on several fronts.

Since declaring its independence in 1960, Chad has suffered instability and violence, stemming mostly from tensions between the mainly Arab-Muslim north and the predominantly Christian and animist south. Nevertheless, it has provided shelter to about two hundred thousand refugees from the Darfur region of Sudan along its eastern border. The government has been dominated since 1990 by members of one ethnic group, the Zaghawa. In 2005, the constitution was revised to allow the president to serve more than two terms.

The area that today is Chad started out being populated by a disconnected group of tribes. A humanoid skull has been dated at more than three million years old. The Saharan area was not totally arid in ancient times, so the population was more evenly distributed. Cave paintings depict elephants, rhinoceroses, giraffes, cattle, and camels. Only camels still live in the area. Eventually, these tribes were overtaken by kingdoms. Chad was controlled by some weak local kingdoms that were absorbed into the Kanem-Bornu and Baguirmi kingdoms. At their peak, these two kingdoms and that of Ouaddai controlled a good part of what is now Chad.

Starting in the Middle Ages, Chad became a crossroads between Muslim traders and the native tribes of the tropical forests. From 1500 to 1900, Arab slave raids were widespread.

The French first penetrated in 1891, establishing control through a series of military expeditions. Armed clashes continued for many years. Chad became part of the Federation of French Equatorial Africa in 1910 and a colony in 1920. The federation was dissolved in 1959, emerging into Gabon, the Central African Republic, Congo, and Chad. In 1960, Chad became an independent country, with François Tombalbaye as its first president.

In 1969, Muslim dissatisfaction with President Tombalbaye, a Christian southerner, developed into a guerrilla war. This, combined with a severe drought, undermined his rule and, in 1975, Tombalbaye was killed in a coup led by another southerner, Félix Malloum. He failed to end the war, and in 1979 he was replaced by a Libyan-backed northerner, Goukouni Oueddei. 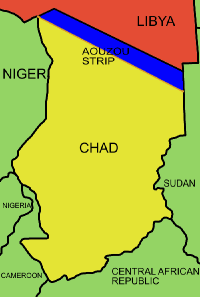 By this stage, France and Libya were intervening repeatedly to support one side against another. The leader of the French-supported rebel group FAN (Forces Armées du Nord), Hissène Habré, a former defense minister, became prime minister in 1978. In 1982, he deposed President Oueddei and assumed control. His eight-year rule led to immense political turmoil, with human rights organizations accusing him of having ordered the execution of thousands of political opponents and members of tribes thought hostile to his regime.

Libya invaded Chad in 1975, theoretically to drive Habré from power. It occupied a narrow strip of land known as the Aouzou Strip. France and the United States responded by aiding Habré in an attempt to contain Libya's regional ambitions under Muammar Qaddafi. In 1980, Libya occupied all of northern Chad, but Habré defeated Libyan troops and drove them out in 1981. In 1983, Qaddafi's troops occupied all of the country north of Koro Toro. But aid from the United States and France helped Habré win the war against Libya.

Despite this victory, Habré's government was weak and seemingly disliked by a majority of Chadians. He was deposed by Idriss Déby Itno in 1990, and Habré went into exile, where he faces prosecution for crimes against humanity. Déby installed himself as dictator. Soon after Déby took control of the government, a constitution was written. Popular support for Déby was apparently shown in an election in 2001, when he defeated six other candidates. The election was described as being "reasonably fair," although there were some noted irregularities. A constitutional amendment was subsequently passed allowing Déby to run again, and in 2006, he was elected to his third presidential term with more than three-fourths of the votes cast.

In 1998, an armed insurgency began in the north. A Libyan-brokered peace deal in 2002 failed to put an end to the fighting. Rebels opposed to Déby's rule continued to attack the Chadian army in 2006, both in the south and east.

In 2003 and 2004, unrest in neighboring Sudan's Darfur region spilled across the border, along with many thousands of refugees. In 2005, Chad announced that it was in a "state of war" with Sudan. Militias from Darfur started raiding refugee camps and burning Chadian towns in border areas in 2006, leading to the declaration of a "state of emergency" in the area.

A strong executive branch headed by President Déby of the Patriotic Salvation Movement dominates the Chadian political system. Power is concentrated in the hands of the president's Zaghawa ethnic group and its allies, who took power in the 1990 rebellion. There are few opportunities for effective opposition. Déby was elected constitutionally in 1996 and 2001, although international observers noted irregularities, including widespread vote rigging, in the election process. The president of Chad was limited to two terms until Déby had that provision removed in 2005. He ran successfully for a third term in 2006 in an election boycotted by the major opposition parties. The state controls the main radio stations and the only television station, and thus limits the dissemination of any opposition views to the largely illiterate rural population.

The president has the power to appoint the prime minister and the Council of State (or cabinet) and exercises considerable influence over appointments of judges, generals, provincial officials, and heads of Chad’s parastatal firms. Chad's legislative branch consists of a unicameral national assembly. Its judicial branch consists of a supreme court, a court of appeal, criminal courts, and magistrate courts.

Longtime Chad President Idriss Déby's death on April 20, 2021 resulted in both the nation's National Assembly and government being dissolved and national leadership being replaced with a transitional council consisting of military officers and led by his son, Mahamat Kaka.

The security forces, also dominated by the president's Zaghawa ethnic group and its allies, committed or sanctioned serious human rights abuses with little danger of any penalty. These abuses include killings, tortures, beatings, and rapes, as well as politically motivated disappearances. There are limits on freedom of speech and the press, including harassment and detention of journalists, and on freedom of assembly. Violence and discrimination against women is widespread. Child abuse, slavery, and forced child labor, primarily to be herders or domestic workers, is also prevalent.

Chad is a landlocked country in north-central Africa measuring 496,000 square miles (1,284,000 square kilometers). It borders Libya to the north, Sudan to the east, the Central African Republic to the south, Cameroon and Nigeria to the southwest, and Niger to the west. In the north, it contains the Tibesti Mountains, the largest mountain chain in the Sahara Desert.

Chad has four climactic zones: desert in the north; broad, arid plains in the center; dry mountains in the northwest; and tropical lowlands in the south. Only 3 percent of Chad is arable land and none of it has permanent crops. Environmental hazards in Chad include hot, dry, dusty harmattan winds in the north, periodic droughts, and locust plagues. Lake Chad, which is in both Chad and Cameroon, was once the second-largest lake in Africa and one of the most important wetlands on the continent. It has shrunk dramatically during the last few decades and is now down to less than 10 percent of its former size, due to increased water use and low rainfall. 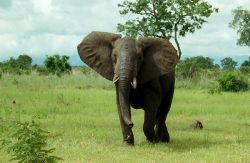 Chad's animal and plant life correspond to the different climatic zones. In the Saharan region, the only flora is the date-palm groves of the oasis. Palms and acacia trees grow in the Sahelian region. The southern, or Sudanic, zone consists of broad grasslands or prairies suitable for grazing.

Elephants, lions, buffalo, hippopotamuses, rhinoceroses, giraffes, antelopes, leopards, cheetahs, hyenas, and many species of snakes are found here, although most large carnivore populations have been drastically reduced since the early twentieth century.[6]

Extensive deforestation has resulted in loss of trees such as acacias, baobab, dates and palm trees. This has also caused loss of natural habitat for wild animals; one of the main reasons for this is also hunting and livestock farming by increasing human settlements. Populations of animals like lions, leopards and rhino have fallen significantly.

Poaching is a serious problem in the country, particularly of elephants for the profitable ivory industry and a threat to lives of rangers even in the national parks such as Zakouma. Elephants are often massacred in herds in and around the parks by organized poaching.

Chad's primarily agricultural economy is being boosted by major oilfield and pipeline developments that began in 2000. Over 80 percent of Chad's population continues to rely on subsistence farming, fishing, and stock raising for its livelihood. Cotton, cattle, and gum arabic have, until recently, provided the bulk of Chad's export earnings, but Chad began to export oil in 2003 from three oilfields near Doba.

Chad's economy has long been handicapped by its landlocked position, poor internal communications, high energy costs, scarce water resources, and a history of instability. Until now, Chad has relied on foreign assistance and foreign capital for most public and private sector investment projects, but oil income will transform government finances.

A consortium, led by U.S.-based ExxonMobil, invested $3.7 billion to develop oil reserves estimated at 1 billion barrels (0.2 km³) in southern Chad, and Chad became an oil-producing country in 2003, with the completion of a pipeline (financed in part by the World Bank) linking its southern oilfields to terminals on the Atlantic coast via neighboring Cameroon. Chad hopes to avoid the waste and corruption experienced in some other African oil-producing countries; as a condition of its assistance, the World Bank has insisted on a new law requiring that 80 percent of oil revenues be spent on development projects.

Provided stability is maintained, the outlook for Chad's economy is now better than it has ever been. It is known that further reserves of oil exist within the country, in addition to the oilfields that are already being exploited. Exploration for uranium is also under way.

Since 1995 the government has made progress in reforms, liberalizing its control of the telecommunications, cotton, and energy sectors and partially or completely privatizing most state enterprises.

There are more than 200 ethnic groups in Chad. Those in the north and east are generally Muslim; most southerners are Christians or animists. Through their long religious and commercial relationships with Sudan and Egypt, many of the peoples in Chad's eastern and central regions have become more or less “Arabized,” speaking Arabic and engaging in many other Arab cultural practices as well. More than three-quarters of the Chadian population is rural.

Culturally, Chad is very diverse. Among the manifestations of this diversity is the extremely large number of languages spoken there. Although the only official languages in Chad are Arabic and French, there are also more than 100 tribal languages spoken. The largest ethnic group in Chad, the Christian/animist Sara peoples living in the south, makes up only 20 percent of the population. In central Chad, people are mostly nomadic and pastoralist. The mountainous north has a sparse, mostly Muslim population of mixed backgrounds. Each society in Chad (smaller than the groups described above) has developed its own religion, music, and folklore.

Muslims make up the majority (51 percent), and Christians account for slightly more than one-third (35 percent) of the population. The rest are animist or other.