Hyena (or Hyæna) is any terrestrial mammal in the subfamily Hyaeninae of the family Hyaenidae of the order Carnivora, typically characterized by a dog-like appearance, powerful jaws, and hind limbs shorter than fore limbs. There are three extant (living) species of hyenas: Crocuta crocuta (spotted hyena or laughing hyena), Hyaena hyaena (striped hyena), and Parahyaena brunnea (brown hyena). A fourth living member of the Hyaenidae family is Proteles cristatus (the aardwolf); however, it is a member of the Protelinae subfamily. The Hyaenidae family is also known as the hyena family, and all members of this family, including the aardwolf, are sometimes designated as hyenas.

Hyenas are native to Africa, Arabia, Asia, and the Indian subcontinent. Although they resemble dogs in appearance, they are more closely related to cats, and are placed in the suborder Feliformia ("cat-like") of the order Carnivora, rather than the suborder Caniformia ("dog-like").

There is a historical tendency for people to have strongly negative views toward hyenas. Their scavenger nature, including scavenging graves for food, has led people to associate hyenas with gluttony, uncleanliness, and cowardice, and in some local cultures they have been associated with demons and witches. The haunting laughter-like calls of the spotted hyena, which resembles hysterical human laughter, has only added to those negative feelings and inspired the idea in local cultures that they could imitate human voices and call their victims by name. While also seen as wise and clever, the hyenas' knowledge has been seen to be that of the debased, profane, and earthly kind, and they have been looked at as greedy hermaphrodites, and associated with deviant sexual behavior.

Notwithstanding these negative associations of people, hyenas actually are key components of most African ecosystems and some ecosystems in Asia. The spotted hyena is perhaps the most abundant carnivore on the African continent, and all are integral to food chains. Their ability to fulfill their role in harmony with humans requires a greater awareness of their importance, viewing hyenas in a more positive light. 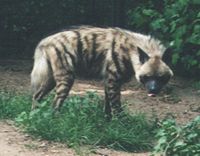 Hyenas bear some physical resemblance to canids. However, they are placed in a biological family that is most closely related to Herpestidae (the family of mongooses and meerkats). The three living species of hyenas have among the strongest jaws in the animal kingdom and an adult of the species has only the big cats (lions) to fear. The fourth member of the hyena family, the insectivorous aardwolf, does not have such powerful jaws, given its diet consists mainly of termites, other insect larvae, and carrion.

All three hyena species, and the aardwolf, have a distinctly bear-like gait and sloping posture due to their front legs being longer than their hind legs. The aardwolf, striped hyena, and brown hyena have luxurious, striped pelts and manes lining the top of their necks, which erect when frightened. The spotted hyena's fur is considerably shorter and is spotted rather than striped. Unlike other species, its mane is reversed forwards.

Hyenas are highly intelligent animals. One indication of hyena intelligence is that they will move their kills closer to each other to protect them from scavengers; another indication is their strategic hunting methods (Lind 1977).

The majority of hyena species show little sexual dimorphism, usually with males being only slightly larger than the females. The spotted hyena is an exception to this, as females are larger than the males and dominate them. One unusual feature of the spotted hyena is that females have an enlarged clitoris called a pseudo-penis or demi-penis. Female hyenas give birth, copulate, and urinate through their protruding genitalia, which stretches to allow the male penis to enter for copulation, and it also stretches during birth. The anatomical position of the genitalia gives females total sexual control over who is allowed to mate with them. Researchers originally thought that one of the things that causes this characteristic of the genitals is androgens that are expressed to the fetus very early on in its development. However, it was discovered that when the androgens are held back from the fetus, the development of the female genitalia was not altered.

With the exception of the striped hyena, which have been seen in the jungles of India, hyena species generally reside in arid environments like African savannas and deserts.

With the exception of the aardwolf, all extant members of Hyaenidae are efficient scavengers. Not only do they have extremely strong jaws in relation to their body size, but they also have a very powerful digestive system with highly acidic fluids, making them capable of eating and digesting almost their entire prey, including skin, teeth and bones, parts of horns, and even hooves. Parts of the hair, horns, and hooves that are not completely digested are regurgitated. Since they eat carrion, their digestive system deals very well with bacteria. The spotted hyena, however, is primarily a predator, unlike its cousins.

The spotted hyena or laughing hyena (Crocuta crocuta) are native to Africa and are best known for a chirping, birdlike bark that resembles the sound of hysterical human laughter. Though often labeled incorrectly as a scavenger, the spotted hyena is actually a powerful hunter, the majority of its nourishment being derived from live prey. Spotted hyenas are the most common predator in sub-Saharan Africa, living in savanna, dry woodland, and desert habitats. Spotted hyenas are successful pack hunters of small to large sized ungulates.

The striped hyena (Hyaena hyaena) is closely related to the brown hyena. It lives in Africa, the Middle East, Pakistan, and western India. It is extinct in Europe, but can occasionally be spotted in Anatolia, Turkey. It is the smallest of the three extant hyena species. Striped hyenas are largely scavengers, but will also eat small animals, fruit, and insects. Larger subspecies are known to hunt animals as large as wild boar. They are nomadic, moving from water hole to water hole, but never straying more than 6 miles from one. Like many other animals of hot climates, their ears radiate heat.

The striped hyena is generally considered solitary, but has some social organization. It forages individually and is rarely seen in groups. It does, however, associate in small family groups at the den. Striped hyena live in the tropical savanna, grasslands, semi-desert, scrub forest, and woodland.

The brown hyena (Parahyaena brunnea, formerly Hyaena brunnea) lives mainly in the Kalahari and Namib deserts of southern Africa. The intermediate-sized extant hyena, this species is 110-136 cm (43-53 in) in body length, 64-88 cm (25-35 in) tall at the shoulder, and weighs 37-55 kg (82-121 lb), though exceptional larger individuals are known. It is smaller than the spotted hyena, and unlike its spotted cousin, is largely a scavenger. It is the largest land animal to derive most of its diet from scavenging, although they will also hunt small mammals. Because of the scarcity of food in the desert, the brown hyena supplements its diet with fruit and vegetables, and along the Namib coastline they are known to snatch seal pups.

Like spotted hyena, the brown hyena lives in packs. However, brown hyena clans are much smaller (ranging between 4 and 15 members) and less organized, and do not hunt cooperatively. A particularly large food source may draw several of the clan to it, and they will work together to defend their find. They will also defend their territories as a group. Brown hyena can generally chase off leopard, caracal, or cheetah, but spotted hyena will drive them from kills. Brown hyena often feed from lion kills, but lions dominate and occasionally kill brown hyena.

Unlike the spotted hyena, the females do not have enlarged clitoris, and males are slightly larger than females. 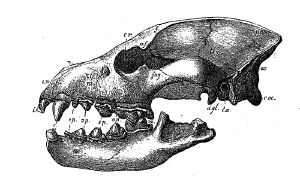 The hyaenids have no fossil record before the mid-Miocene period, about 10 million years ago, thus making them the most recent addition to the carnivora. It is believed that the family began in Africa and spread through Europe and Asia. The peak of the Hyaenidae was during the Pleistocene, with 4 genera and 9 species of hyena (Postanowicz 2007). Extinct hyena genera included civet-like tree dwellers and speedy species designed for running down prey, along with even more powerfully developed bone-crushing species similar to modern hyena. Fossil examples include the genera Protictitherium, Ictitherium, Chasmaporthetes, Adcrocuta, Pachycrocuta, and Percrocuta (of which P. gigantea was the largest Hyena which ever lived). Their success was largely due to the fact that the sabre-toothed cats, which they coexisted with, were unable to make full use of their prey due to the nature of their dentition. The hyena's powerful jaws and digestive systems allowed them to consume otherwise indigestible parts (Postanowicz 2007). As the sabre-toothed cats began to die out and be replaced by short fanged felids, which were more efficient eaters, some hyenas began to hunt for themselves and began evolving into new species, the modern spotted hyena being among them (Denis-Huot and Denis-Huot 2002).

Negative associations with hyenas have generally stemmed from their tendency to scavenge graves for food (being one of the few creatures naturally suited for this, due to their ability to devour and digest every part of a carcass, including bone). As such, many people associate hyenas with gluttony, uncleanliness, and cowardice.

Their haunting, laughter-like calls inspired the idea in local cultures that they could imitate human voices and call their victims by name. Hyenas are also associated with divination and sometimes thought of as tools of demons and witches. In African folklore, witches and sorcerers are thought to ride hyenas, or even turn into them.

In the Biblical book of Isaiah (13:22), it is stated of Babylon that "hyenas will howl in their citadels," adding their voices to the sounds of desolation in this once beautiful city (Tucker 1998). The hyena was also a symbol of wisdom and cleverness; however, because of its constant laughter, its knowledge was seen to be that of the debased, profane, earthly, or initiatory kind. The wise hyena was a fool compared to the all-knowing God and symbolized the foolishness of man's wisdom as opposed to that of the Father (I Cor 1:25).

African attitudes toward hyenas are little better than those held in the Western world. Many African tribes view hyenas as inedible and greedy hermaphrodites. The Bouda is a mythical tribe reputed to house members able to transform into hyenas (Postanowicz 2007; Glickman) Belief in "Werehyenas" is so entrenched within the traditional lore of the Bornu people of north-eastern Nigeria, that their language even contains a special word bultungin which translates as, "I change myself into a hyena."

Early naturalists thought hyenas were hermaphrodites, largely due to the female spotted hyena's unique urogenital system. According to early writings such as Ovid's Metamorphoses and the Physiologus, the hyena continually changed its sex and nature from male to female and back again. In Paedogogus, Clement of Alexandria noted that the hyena (along with the hare) was "quite obsessed with sexual intercourse." Many Europeans associated the hyena with sexual deformity, prostitution, and deviant sexual behavior.