Civet is the common name for various, small, cat-like, almost arboreal mammals in the family Viverridae, characterized by a long, lithe body with relatively short legs, a long, pointed muzzle, and relatively short ears. They are native to the tropics of Africa and Asia. The term civet also refers to the strong-smelling secretion (musk) of the perianal glands that is used in perfumes and medicines.

While these are the "true civets," other mammalian species in other families also have the common name of civet. The African palm civet (Nandinia binotata) is a slender-bodied, arboreal mammal that is the only extant member of the family Nandiniidae. The Malagasy civet or striped civet (Fossa fossana) is a rare member of the Eupleridae family (a taxon of "Malagasy carnivores"). Spotted skunks, comprising the genus Spilogale in the even more distant family Mephitidae, are sometimes called "civet cats."

Civets play a valued role in the ecosystem as part of food chains, consuming various invertebrates, small vertebrates, and some plant matter (fruit, roots) while being preyed upon by larger mammals, reptiles (pythons), and birds of prey. They also have served as a food source for people. The harvesting of the musk from the perianal glands as a base for perfumes and medicines has raised ethical concerns given the availability of synthetic substitutes and the manner of extraction, which involves either scraping the secretions from a live animal or killing of the animal.

The true civets belong to the Feliformia suborder within the order Carnivora; that is, they are grouped with other "cat-like" carnivores such as felids (true cats), hyenas, and mongooses. As a feliform, they have characteristic double-chambered auditory bullae (the bony capsules enclosing the middle and inner ear), composed of two bones joined by a septum. (Caniforms have single-chambered or partially divided auditory bullae, with a single bone.)

The "true civets" are members of the family Viverridae along with the binturong, genets, Asiatic, and African linsang. Viverrids have long bodies, relatively short legs and small heads, and generally a long and flattened skull. Their auditory bullae have a clear demarcation between the entotymphanic andectotympanic parts and is oblique to the long axis of the skull (unlike in the family Herpestidae where it is perpendicular to that axis). The second lower incisor seems out of line slightly with the incisor row, and the carnassials are well-developed. The last upper molar is not constricted in the middle (as with most members of Mustelidae) (Myers 2000).

Civets have a broadly cat-like general appearance, though the muzzle is extended and often pointed, rather like an otter or a mongoose. They range in length from about 40 to 70 centimeters (17 to 28 inches), excluding their long tails, and in weight from about 1 to 5 kilograms (3 to 10 pounds).

Although the African palm civet (Nandinia binotata) resembles the other civets, it is genetically distinct and belongs in its own monotypic family, Nandiniidae). The Malagasy civet (Fossa fossana) was initially placed together with the true civets, but it was moved to the family Eupleridae when phylogenetic analysis of DNA provided strong evidence that all Malagasy carnivores evolved from a single common ancestor that was a herpestid (Yoder et al. 2003; Yoder and Flynn 2003; Gaubert et al. 2005).

In 2005, the World Wide Fund for Nature released photos taken by a night time camera trap of an unknown carnivore (nicknamed the cat-fox) on Borneo. Scientists debate whether this animal is new species of civet, or a known, but rare, species (such as Hose's palm civet, thought previously to be extinct).

Viverrids are native to Africa (except the area immediately south of the Mediterranean), Madagascar, the Iberian Peninsula, southern China, and Southeast Asia. Favored habitats include woodland, savanna, and mountain biomes and, above all, tropical rainforest. In consequence, many are faced with severe loss of habitat. Several species are considered vulnerable and the otter civet (Cynogale bennettii), a semi-aquatic civet found in forests near rivers and swampy areas of the Thai-Malay Peninsula, Sumatra, and Borneo, is classified as endangered.

In Sri Lanka, the Asian palm civet (Paradoxurus hermaphroditus) is known as "Uguduwa" by the Sinhala speaking community. The term Uguduwa and Kalawedda is used interchangeably by the Sri Lankan community to refer to the same animal. However, the term Kalawedda is mostly used to refer to a different species of the civet family, which is similar in appearance to the ring-tailed cat.

Civets are omnivorous supplementing a diet of small vertebrates (rats, squirrels, small birds, lizards), and insects and other invertebrates (worms, crustaceans, mollusks), both hunted and scavenged, with fruit, eggs, and possibly roots. They are largely nocturnal hunters and arboreal.

Very little is known about civets' mating habits. They breed year round, producing litters of 1 to 6 fully-furred babies after a gestation period of 60 to 81 days. Some species may have 2 litters per year. 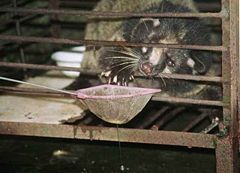 A civet photographed in the Zigong People's Zoo, Sichuan, 2001, by the Asian Animal Protection Network. The AAPN writes that the animal was kept hungry so that visitors could feed him live eels from a ladle

The musk or "civet" secreted from the perianal glands of civets is harvested for use as a base for perfumes and medicine (Myers 2000). It is extracted by either killing the animal and removing the glands, or by scraping the secretions from the glands of a live animal. The latter is the preferred method today.

Animal rights groups, such as the World Society for the Protection of Animals, express concern that harvesting musk is cruel to animals. Between these ethical concerns and the availability of synthetic substitutes, the practice of raising civets for musk is dying out. Chanel, maker of the popular perfume Chanel No. 5, claims that natural civet has been replaced with a synthetic substitute since 1998.

Kopi Luwak, also known as caphe cut chon (fox-dung coffee) in Vietnam and kape alamid in the Philippines, is coffee that is prepared using coffee cherries that have been eaten and partially digested by the Asian palm civet, then harvested from its feces. 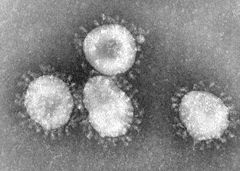 SARS Virus, many believe the masked palm civet to be the source of the SARS outbreaks in Asia in 2003.

Virologists have speculated that the source of the SARS-CoV virus, which had a significant outbreak in Asia in 2003, can be traced back to a particular species of civet, the masked palm civet. Many people hunt the masked palm civet for its meat. It has been speculated that through such practices the SARS virus was first introduced to humans. However, the possibility remains that the virus may have been contracted in some other unknown animal before infecting the masked palm civet. Since this information has been exposed to the public, the ingestion of civets in Asia has dropped drastically, going from 51 percent of people that do not eat civets to 72 percent (AP 2006).