The City of Rocks is a U.S. National Reserve and state park at the southern end of Idaho's Albion Mountains. It is located in the south-central part of the state, two miles north of Utah, and is bounded by Snake and Raft River valleys to the north and east, and the Cedar Hills on the south. The rock formations in the area are granitic batholith formed during two widely spaced times and contain some of the oldest rocks in the western United States.

The City of Rocks is an extraordinary granite encirclement of rock formations that has long attracted people. For centuries the Shoshone and Bannock Native American tribes camped in the area and depended upon the abundant piñon pine found there as a critical food source. In the nineteenth century the California Trail cut through the region. Wagons trains bound for California in the 1840s and 1850s left the Raft River valley and traveled through the area and over Granite Pass into Nevada. The monoliths served as important trail markers, and the Circle Creek basin provided a reliable source of water. The names or initials of emigrants written in axle grease are still visible on Register Rock, Camp Rock, and many others local sites. Ruts from wagon wheels can be seen in some of the rocks. Later, migrating settlers depended upon Limber pine, juniper, and mahogany for sources of fuel and fence posts.

Great biological diversity exists here, with a great variety of textures, colors, and shapes in the natural landscape. 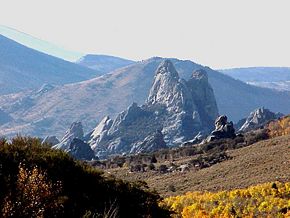 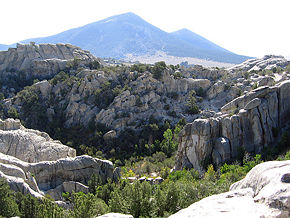 Typical view within the City of Rocks. 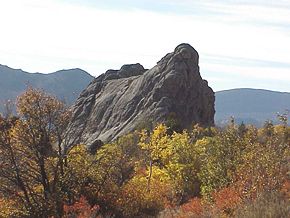 Bath Rock in the City of Rocks National Reserve in Idaho State.

The City of Rocks National Reserve lies within the southern end of the Albion Mountains in south-central Idaho. It is bordered on the east by the Raft River valley and to the north by the Snake River valley. The Snake River Canyon is 30 miles north. The southern boundary is the Cedar Hills, with the Utah state border two miles south of the Reserve.

North-south oriented ridges and free-standing knobs typify the area. Drainages in the area are steep and rocky. Elevations rise from 5,650 feet where Circle Creek meets the reserve boundary to 8,867 feet at the top of Graham Peak in the north. Graham Creek flows through the Reserve's northeast corner. Smoky Mountain (elevation 7,520 ft) is a large free-standing erosional form that dominates the eastern boundary.

The reserve contains two relatively large basins, each drained by an eastward flowing tributary of the Raft River. The Circle Creek basin in the reserve's north end draws water from three tributaries, North, Center, and South creeks. This basin contains a large concentration of granitic outcrops and monoliths that inspired the name of City of Rocks. The second basin (unnamed), is located southwest of Circle Creek and is separated from it by a wide, low, ridge. It is drained by several intermittent water courses, which join to form a single channel that flows through Heath Canyon at the base of the south side of Smoky Mountain.

The Circle Creek basin contains one of the most reliable water sources within the reserve. Because of this, it was a commonly used campsite location for emigrants on the California Trail. The second basin moderately slopes and has deep loamy soil. This was attractive to settlers during the historical period. At one time it contained four homesites on Enlarged Homestead claims, and various irrigation improvements on its 600 acres.

One half mile to the southeast of the Twin Sisters in the same ridge system is Pinnacle Pass, which funneled California Trail travelers into the next drainage south—out of the City of Rocks and towards the junction of the California Trail and the Salt Lake Alternate.

The majority of the soils in the reserve are highly erodible. The forces of wind and water are the primary sources for erosion. Soil erosion is greatest near roads and on steep slopes and intermittent stream channels. Erosion in these areas has formed deep gullies. Some of the exposed soil banks are more than eight feet high.

Rock formations in the reserve developed through an erosion process called exfoliation, during which thin rock plates and scales sloughed off along joints in the rocks. The joints, or fractures, probably resulted from contractions when the rock cooled or from expansions when overlying materials eroded away and eliminated confining pressure. The granite has eroded into a fascinating assortment of shapes, some as high as 600 feet. The upper surfaces of many of the rocks are covered with flat-floored weathering pits known as panholes. The most notable panhole is located on top of Bath Rock and is continuously filled with water from rain or snow melt.

City of Rocks was designated a National Reserve, a unit of the National Park Service, in recognition of the nationally significant geological and scenic values of its rock formations and the historical significance of the California Trail.

The semi-arid climate is characterized by low to moderate precipitation, great extremes in both daily and seasonal temperatures, and low relative humidity. Average annual precipitation is approximately 14 inches at the lower elevations and 22 inches in the highest areas. Average snow depths for higher elevations range between 35 and 68 inches. Summers are hot and dry with occasional thunderstorms.

The reserve contains diverse habitats that support a variety of wildlife.

Douglas fir, lodgepole pine, and alpine fir grow along the north and east slopes of the mountains at an elevation of about 6200 feet. Historically, farmers and ranchers depended upon this forest for building and fence construction and maintenance material, as well as for employment during the fallow autumn and winter months.

The dominant vegetation in lower elevations of the reserve and on adjacent range land is black or big sage (Artemesia tridenta). During range improvement projects in the 1950s, crested wheatgrass was seeded. This is now abundant and provides much of the stock feed.

The large variety of mammals, birds, reptiles, and invertebrates includes:

The Shoshone and Bannock tribes hunted the buffalo that once roamed in the City of Rocks area and gathered the nuts of the piñon pine trees. The arrival of horses to the Americas in the sixteenth century and swelling European immigration disrupted the Shoshone-Bannock homelands and way of life. They grew to resent the intruders but could do little to stop them. Most emigrants on the California Trail saw no Native Americans, but some of their journals record smoke signals rising from high hills and the surrounding mountains.

In 1826, Peter Skene Ogden and his Snake River brigade of beaver trappers were the first non-Natives to note the City of Rocks. Having few beaver, the area was ignored until 1843, when growing summer streams of wagons began flowing through the area. 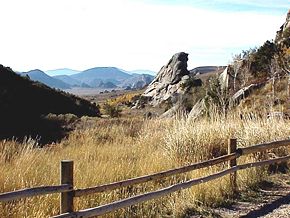 The North Fork Trailhead in the City of Rocks National Reserve in Idaho State.

"We encamped at the city of the rocks, a noted place from the granite rocks rising abruptly out of the ground," wrote James Wilkins in 1849. "They are in a romantic valley clustered together, which gives them the appearance of a city." Wilkins was among the first wagon travelers to fix the name City of Rocks to what looked like "a dismantled, rock-built city of the Stone Age."

California Trail pioneers were leaving civilization as they knew it in the East for new lives in the West. Some wrote their names in axle grease on rock faces, and their signatures can be seen today. Beginning in 1843, City of Rocks was a landmark for emigrants on the California Trail and Salt Lake Alternate Trail and later on freight routes and the Kelton, Utah to Boise, Idaho stage route.

Early emigrant groups were guided by experienced mountain men such as Joseph B. Chiles and Joseph R. Walker. Later wagon parties followed the trails themselves, perhaps with the help of diary accounts of previous emigrants. The City of Rocks marked progress west for the emigrants and, for their loaded wagons, a mountain passage over nearby Granite Pass. By 1846, emigrants headed for Oregon's Willamette Valley also used this route as part of the Applegate Trail. In 1848 Samuel J. Hensley pioneered the Salt Lake Alternate Trail from Salt Lake City via Emigrant Canyon to Granite Pass. In 1852, some 52,000 people passed through the City of Rocks on their way to the California goldfields.

When the trails opened in the 1840s, Granite Pass belonged to Mexico and was less than a mile from Oregon Territory. After 1850 the Pass became part of Utah Territory, and in 1872 an Idaho-Utah boundary survey error placed Granite Pass in Idaho Territory.

With completion of the transcontinental railroad in 1869, the overland wagon routes began to pass into history. However, wagons saw continued use on regional supply routes that spread out from the railroad lines.

John Halley's stage route connected the railroad at Kelton, Utah with Idaho's mining hub of Boise, Idaho and supplied the early economic development of Idaho, which won statehood in 1890. The Kelton stage route passed through the City of Rocks, with a stage station set up near the junction of the old California Trail and the Salt Lake Alternate. Settlers began to homestead the City of Rocks area in the late 1800s. Dryland farming declined during the drought years of the 1920s and 1930s, but ranching survived. Livestock grazing began with early wagon use of the area in the mid-1800s and continues today.

The Idaho Legislature declared Section 36 within City of Rocks as a state park under the jurisdiction of the Idaho Lands Board on February 27, 1957. The National Park Service designated a much larger area a National Historic Landmark in 1964, recognizing it for its association with Overland Migration, roughly spanning the years 1843 through 1869. Landmark status was expanded in 1974, with designation of the city as a National Natural Landmark.

City of Rocks National Reserve was created November 18, 1988 by Public Law 100-696, Arizona-Idaho Conservation Act of 1988. This Act drew a 22-mile boundary around 14,407 acres owned or managed by the USDA Forest Service, Bureau of Land Management, Idaho Department of Parks and Recreation, and private individuals. All lands owned by the United States within the Reserve boundaries were placed under the authority of the National Park Service. Today, the park functions under a unique cooperative agreement between the National Park Service and Idaho Department of Parks and Recreation. Both agencies allocate partial funding to its operation.

Retrieved from https://www.newworldencyclopedia.org/p/index.php?title=City_of_Rocks&oldid=1008547
Categories:
This page was last edited on 27 December 2017, at 18:25.
Content is available under Creative Commons Attribution/Share-Alike License; additional terms may apply. See Terms of Use for details.