Chipmunk is the common name for any of the small, striped, squirrel-like rodents comprising the genus Tamias of the tribe Marmotini in the family Sciuridae. Traditionally, Eutamias had been considered a second genus of chipmunks, but today is generally considered a subgenus of Tamias.

Ecologically, chipmunks fulfill several important functions in forest ecosystems, including seed dispersal and establishment, vectors for dispersal of spores of subterranean sporocarps (truffles) (which lack the ability to disperse their spores through the air), and key components of various food chains, serving as prey for various predatory mammals and birds, while being opportunistic predators themselves. For humans, chipmunks add wonder to their experience of nature and are generally favorably portrayed in art, television, and movies.

Chipmunks belong to the squirrel family, Sciuridae. While all members of Sciuridae might be referred to as squirrels, in everyday speech in the English-speaking world, the term squirrel usually refers to tree squirrels, which are members of the genera Sciurus and Tamiasciurus. The Sciuridae family also includes flying squirrels, and ground squirrels such as the chipmunk, prairie dog, and marmot (including woodchucks). The ground squirrels are placed in tribe Marmotini and include several genera, one of which is the genus Tamias (the chipmunks).

Historically, since a 1929 revision by Howell, two genera of chipmunks were recognized: the genus Tamias found in eastern North America, and the genus Eutamias found in western North America (subgenus Neotamias) and Asia (subgenus Eutamias) (Ellis and Maxson 1979). Various authorities supported either these two genera (White 1953) or placed all chipmunks in one genera, Tamias. Chromosomal studies by Nadler et al. (1977) led to a recommendation as well that all chipmunks be placed in the genus Tamias. Currently, authorities generally support recognizing one genus of chipmunks, with 25 species distributed among three subgenera: Tamias, Eutamias, and Neotamias (Piaggio and Spicer 2001; Myers et al. 2006; Wilson and Reeder 2005)). Of these 25 species, one species is in northeastern Asia, one in eastern North America, and the rest native to western North America.

Tamias is Latin for "storer," a reference to the animals' habit of collecting and storing food for winter use (Whitaker and Elman 1980). The common name originally may have been spelled "chitmunk" (from the Odawa word jidmoonh, meaning "red squirrel"; c.f. Ojibwe, ajidamoo). However, the earliest form cited in the Oxford English Dictionary (from 1842) is "chipmonk." Other early forms include "chipmuck" and "chipminck," and in the 1830s they were also referred to as "chip squirrels," possibly in reference to the sound they make. They are also called "striped squirrels" or "ground squirrels," though the name "ground squirrel" more often refers to the genus Spermophilus. 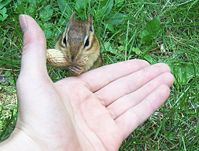 A chipmunk in relation to a human hand.

Like all rodents, members of Sciuridae are noted for their teeth. They have a pair of large incisors on the upper and one on the lower jaw that grow continuously and need to be kept short and sharpened by frequent gnawing. (The word "rodent" comes from the Latin word for "gnawing.") The second pair of incisors, the canines, and the first premolars are missing in rodents, creating a gap between the incisors and the grinding teeth.

Eastern chipmunks mate in early spring and again in early summer, producing litters of four or five young twice each year. Western chipmunks only breed once a year. The young emerge from the burrow after about six weeks and strike out on their own within the next two weeks.

Chipmunks construct expansive burrows, which can be more than 3.5 meters in length with several well-concealed entrances. The sleeping quarters are kept extremely clean as shells and feces are stored in refuse tunnels.

Though they are commonly depicted with their paws up to the mouth, eating peanuts, or more famously their cheeks bulging out on either side, chipmunks eat a variety of foods. Their omnivorous diet consists of grain, nuts, birds' eggs, fungi, worms, and insects. At the beginning of autumn, many species of chipmunk begin to stockpile these goods in their burrows, for winter. Other species make multiple small caches of food. These two kinds of behavior are called larder hoarding and scatter hoarding. Larder hoarders usually live in their nests until spring.

Chipmunks fulfill several important functions in forest ecosystems. Their activities harvesting and hoarding tree seeds play a crucial role in seedling establishment. They consume many different kinds of fungi, including those involved in symbiotic mycorrhizal associations with trees, and are an important vector for dispersal of the spores of subterranean sporocarps (truffles), which have co-evolved with these and other mycophagous mammals and thus lost the ability to disperse their spores through the air.

These small squirrels play an important role as prey for various predatory mammals and birds, but are also opportunistic predators themselves, particularly with regard to bird eggs and nestlings. In Oregon, Mountain Bluebirds (Siala currucoides) have been observed energetically mobbing chipmunks that they see near their nest trees.

If unmolested, they often become bold enough to take food from the hands of humans. The temptation to pick up or pet any wild animal should be strictly avoided, however. While rabies is exceptionally rare (if not non-existent) in rodents, chipmunk bites can transmit virulent and dangerous bacterial infections.

Retrieved from https://www.newworldencyclopedia.org/p/index.php?title=Chipmunk&oldid=678771
Categories:
Hidden category:
This page was last edited on 2 April 2008, at 04:38.
Content is available under Creative Commons Attribution/Share-Alike License; additional terms may apply. See Terms of Use for details.