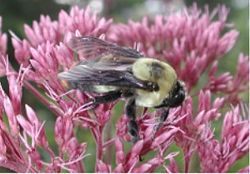 Bumblebees and the flowers they pollinate have coevolved so that both have become dependent on each other for survival.

In biology, coevolution (or co-evolution) is the mutual evolutionary influence between two or more interdependent species, reflected in structural, physiological, or behavioral changes in the species related to their interaction. Classical examples include the mutual adaptation of flowers and pollinating insects for fostering cross-fertilization of the plants and food for the insects. In the case of predator-prey relationships, an example is the corresponding increase in the thickness of snail shells and increased strength and thickness of the claws of predaceous crabs (Luria et al. 1981).

Coevolution is usually attributed to being caused by the selective pressures of natural selection. However, just as evolution in the sense of the theory of descent with modification (the pattern of evolution) can be agnostic with respect to the mechanism (the process of evolution), coevolution can refer to only the observed pattern without the causal element.

Furthermore, theoretically, an alternative explanation for the observed harmony is design by a Creator. Nonetheless, the concept of coevolution coming about due to natural selection itself is not necessarily in opposition to theistic views. Natural selection is a non-progressive, materialistic, and non-purposeful process, and as such its being the main causal agent of new designs and higher taxa does stand in opposition to purposeful, progressive creation by a Creator. However, theistic views allow natural selection to stand as an agent of change within already designed taxa (such as species or genera), and thus could refine the interaction between species as seen in coevolution. For example, the increase in shell size of snails and claw strength in predaceous crabs due to natural selection in wholly within the realm of theistic views.

Coevolution fits with the view of Lynn Margulis that "Life did not take over the globe by combat, but by networking" (Margulis and Sagan 1986)—in other words, by cooperation.

One of the features of living organisms is that they interact. Coevolution is the case whereby there are adaptations in species related to their intimate association.

From the point of view of evolutionary theory, each party in a coevolutionary relationship exerts selective pressures on the other, thereby affecting each others' evolution. Coevolution would includes the evolution of a host species and its parasites, plants and insect pollinators, and predators and prey.

Plants, for example, need to develop unique methods for cross-fertilization given that they cannot move around like animals for mating purposes. Some do this by means of utilizing wind pollination, such as used by maple trees or dandelions. However, most plants used insect pollination, where the plant has adaptations to attract insects and transfer pollen to the insects, and insects have adaptations to allow them to find the plants and obtain food.

Few perfectly isolated examples of evolution can be identified. Evolution in response to abiotic factors, such as climate change, is not coevolution (since climate is not alive and does not undergo biological evolution). Evolution in a one-on-one interaction, such as that between a specialized host-symbiont or host-parasite pair, is coevolution. But many cases are less clearcut: a species may develop adaptations in response to a number of other species, each of which is also adapting in response to a set of species. This situation has been referred to as "diffuse coevolution."

Coevolution does not imply mutual dependence. The host of a parasite, or prey of a predator, does not depend on its enemy for persistence.

Coevolution is also used to refer to evolutionary interactions between and even within molecules in the field of molecular evolution (for example, between hormones and receptors). This usage has existed at least since the term "molecular coevolution" was coined by Gabriel Dover in 1984. Dover claims that there is a third force in evolution, operationally distinct from natural selection and neutral drift, which he terms "molecular drive." According to Dover it explains biological phenomena that natural selection and neutral drift alone cannot explain, such as the 700 copies of a ribosomal RNA gene and the origin of a centipede with 173 legs (Korthof 2001).

The existence of mitochondria within eukaryote cells is an example of coevolution as the mitochondria has a different DNA sequence than that of the nucleus in the host cell. This concept is described further by the endosymbiotic theory, developed by Lynn Margulis.

In his book The Self-organizing Universe, Erich Jantsch attributed the entire evolution of the cosmos to coevolution.

Luria et al. (1981) specifically attribute coevolution to result from organisms pursuing their own interests, defining coevolution as: "A situation in which two or more animal species evolve, each for reasons relating to its own advantage, by maintaining or increasing their interaction with each other or their mutual dependency." They specifically exclude coevolution as an example of prearranged harmony on the basis of Darwinian principles. However, diverse mechanisms are theoretically possible. Furthermore, the concept of harmony is in keeping with the principle of dual purposes, whereby an individual seeks its own survival, maintenance, and development, but at the same time contributes to the benefit of others.

Insect pollintation offers some of the more remarkable examples of the harmony between species. Coevolution has been offered as the means that such harmony has come about.

Examples include pollination of Angraecoid orchids by African moths. These species are considered to coevolve because the moths are dependent on the flowers for nectar and the flowers are dependent on the moths to spread their pollen so they can reproduce. The evolutionary process is considered to have led to deep flowers and moths with long probosci.

Orchids offer some of the most elaborate examples offered for coevolution. On many orchids, the lip (labellum) serves as a landing pad for flying insects. The labellum is sometimes adapted to have a color and shape that attracts particular male insects via mimicry of a receptive female insect. Some orchids are reliant solely on this deception for pollination.

The Lady's Slipper (Paphiopedilum) has a deep pocket that traps visiting insects, with just one exit. Passage through this exit leads to pollen being deposited on the insect. Many neotropical orchids are pollinated by male orchid bees, which visit the flowers to gather volatile chemicals they require to synthesize pheromonal attractants. Each type of orchid places the pollen on a different body part of a different species of bee, so as to enforce proper cross-pollination. The Eurasian genus Ophrys has some species that look and smell so much like female bumblebees that male bees flying nearby are irresistibly drawn in and attempt to mate with the flower, such as with the Bumblebee Orchid (Ophrys bombyliflora). The viscidium, and thus pollen, stick to the head or the abdomen of the bumblebee. On visiting another orchid of the same species, the bumblebee pollinates the sticky stigma with the pollen. The filaments of the pollen have, during transport, taken such position that the waxy pollen are able to stick in the second orchid to the stigma, just below the rostellum. Such is the refinement of the reproduction. If the filaments had not taken the new position on the bee, the pollen could not have pollinated the original orchid.

Coevolution is also considered to occur between predator and prey species, as in the case of the rough-skinned newt, Taricha granulosa, and the common garter snake, Thamnophis sirtalis. In this case, T. granulosa newts produce a potent nerve toxin that concentrates in their skin. T. sirtalis garter snakes have evolved resistance to this toxin, and prey upon the newts. The relationship between these animals is believed to have resulted in an evolutionary arms race that has driven toxin levels in the newt to extreme levels.

Luria et al. (1981) note the case of an "arms race" operating over more than 100 million years in the case of snails and crab predators that use their claws to crush snails. Millions of years ago, the shells of almost all snails were thin. When predaceous crabs appeared, it was noticed in the fossil record that snail shells became thicker, and that crab claws likewise begin to thicken and develop greater crushing strength. That is, it was noticed through geological time that the shells of snails and the average thickness of the claws of crabs increased.

Retrieved from https://www.newworldencyclopedia.org/p/index.php?title=Coevolution&oldid=685492
Categories:
Hidden category:
This page was last edited on 3 April 2008, at 19:17.
Content is available under Creative Commons Attribution/Share-Alike License; additional terms may apply. See Terms of Use for details.