In zoology, shrew is the common name for small, mouse-like insectivorous mammals comprising the family Soricidae, characterized by a pointed snout, minute eyes, and small ears. Although their external appearance is generally that of a long-nosed mouse, the shrews are not rodents and not closely related: The shrew family is part of the order Soricomorpha, which also includes the moles. Shrews have feet with five clawed toes, unlike rodents, which have four. Shrews are also not to be confused with either treeshrews or elephant shrews, which belong to different orders.

Shrews include the smallest known mammals, and also ones with the highest heart rate and highest mass-specific energy consumption (Jurgens et al. 1996). Shrews also have sharp incisors and a reputation for having a savage disposition, killing larger animals and eating incessantly to stay alive. Some are known to be venomous, which is unusual among mammals, and unlike most mammals some species also can use echolocation.

Shrews are distributed almost worldwide: Of the major temperate land masses, only New Guinea, Australia, and New Zealand do not have native shrews at all. In terms of species diversity, the shrew family is the fourth most successful of the mammal families, with over 300 species, being rivaled only by the muroid families Muridae and Cricetidae and the bat family Vespertilionidae.

Shrews provide a valuable service for humans beings, as they consume pest insects and slugs that can damage crops. Beyond this, their small size, savage reputation, and unique behaviors have captured the interest and imaginations of people, adding to the wonder and mystery of nature.

All shrews are small, most no more than mouse-size. The Etruscan shrew, Suncus etruscus, has an adult body mass between 1.6 grams and 2.4 grams for those caught in their natural habitat (Jurgens et al. 1996). As such, it is the smallest known extant mammal. Many shrews weigh only about 15 grams (0.5 ounces) and from 6 to 8 centimeters (two to three inches) long. One of the largest shrews is the Indian musk shrew, Suncus murinus, with body weights ranging from 33.2 grams to 147.3 grams (1.2 to 5.2 ounces) in males and somewhat smaller (23.5 to 80 grams) in females (Ruedi et al. 1996).

Shrews also have a long, pointed and movable snout, small eyes, small ears, and a moderately long tail. They have generally poor vision, but have excellent senses of hearing and smell (Barnard 1984).

Shrews have sharp incisors. Whereas rodents have gnawing incisors that grow throughout life, the teeth of shrews wear down throughout life, a problem made more extreme by the fact that they lose their milk teeth before birth, and therefore have only one set of teeth throughout their lifetime. Apart from the first pair of incisors, which are long and sharp, and the chewing molars at the back of the mouth, the teeth of shrews are small and peg-like, and may be reduced in number. The dental formula of shrews is:

Shrews are found in Europe, Asia, Africa, and the North, Central, and South America. South America has shrews only in the far-northern tropics, including Colombia. Africa has the greatest species diversity.

Shrews hold nearly 10 percent of their mass in their brain, a relatively high brain to body mass ratio (Kelly 2004).

They are very active animals, with voracious appetites. Shrews must eat 80-90 percent of their own body weight in food daily. They are not able to hibernate.

In general, shrews are terrestrial creatures that forage for seeds, insects, nuts, worms, and a variety of other foods in leaf litter and dense vegetation. As voracious predators, they will even attack and kill a larger mouse. Some specialize in climbing trees, living underground, in the subniveal layer, or even hunting in water (Barnard 1984).

Shrews are fiercely territorial, driving off rivals, and only coming together to mate. Many species dig burrows for caching food and hiding from predators, although this is not universal (Barnard 1984).

Female shrews can have up to ten litters a year, and the animals only stop breeding in the winter in temperate zones, and breed all year round in the tropics. Shrews have a gestation period of 17–32 days. The female often becomes pregnant within a day or so of giving birth, and lactates during her pregnancy, weaning one litter as the next is born (Barnard 1984). Shrews live for between 12 and 30 months (Macdonald 2006). 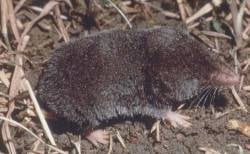 The Northern short-tailed shrew is known to echolocate

The only terrestrial mammals known to echolocate are two genera (Sorex and Blarina) of shrews and the tenrecs of Madagascar. These include the vagrant shrew (Sorex vagrans), the common or Eurasian shrew (Sorex araneus), and the northern short-tailed shrew (Blarina brevicauda). The shrews emit series of ultrasonic squeaks.

The following are the 26 genera of living shrews.