Both the terms "warm-blooded" and "cold-blooded" have fallen out of favor with scientists, because of their generality, and due to an increased understanding in this field. Body temperature types do not fall into simple either/or categories. Each term may be replaced with one or more variants (see: categories of warm-bloodedness). Body temperature maintenance incorporates a wide range of different techniques that result in a body temperature continuum, with the traditional ideals of warm-blooded and cold-blooded being at opposite ends of the spectrum.

The categorization of all animal life as either "warm-blooded" or "cold-blooded" is yet another delineation that has proven inadequate given the great diversity of life. This variety is not only advantageous in terms of filling available niches and providing ecological stability, but is also a quality that makes nature such a source of attraction and pleasure for humans.

A large proportion of the creatures traditionally called "warm-blooded" (mammals and birds) fit all three of these categories. However, over the past 30 years, studies in the field of animal thermophysiology have revealed many species belonging to these two groups that do not fit all these criteria. While all mammals are endothermic and most are homeothermic, for example, some do not maintain a stable internal body temperature regardless of environmental influence. For example, many bats and small birds are poikilothermic and bradymetabolic when they sleep for the night, or day. For these creatures, another term was coined: heterothermy. The Naked Mole Rat (Heterocephalus glaber) is a mammal that is not able to regulate its temperature, but it lives underground in a stable temperature.

Further studies on animals that were traditionally assumed to be cold-blooded have shown that most creatures incorporate different variations of the three terms defined above, along with their cold-blooded counterparts (ectothermy, poikilothermy, and bradymetabolism), thus creating a broad spectrum of body temperature types (see between warm-blooded and cold-blooded). For example, while fish are "cold-blooded" (specifically poikilothermic) in that they do not maintain constant internal temperatures and the temperature often mirrors the ambient temperature, certain species of fish maintain elevated body temperatures to varying degrees. For example, bluefin tuna and porbeagle sharks can elevate their body temperatures in excess of 20°C above ambient water temperatures. For some species of fish, this phenomena of elevated temperatures has been traced to heat exchange, as warmer blood being returned to the gills in small veins runs close to colder, oxygenated blood in narrow arteries leaving the gills.

Endotherms include birds and mammals. By regulating their metabolism, through respiration (oxidation of carbohydrates), along with a variety of other measures, these animals can maintain their inner temperature. Among the diverse mechanisms that can play a primary or supporting role in regulating temperature are burning of fat, shivering (when muscles contract, their cells respire more; respiration releases heat and is the main heat source in the body), blanching (circulatory changes to direct less heat to the skin), flushing (circulatory changes to radiate more heat from the skin), panting, or sweating (to increase heat loss through evaporation). Some mammals have thicker fur during cold winters and a thinner coat in the summer time. Mammals vary significantly in terms of sweat glands. Primates have sweat glands all over their body, dogs have only a few, located on their feet, and whales lack sweat glands completely.

In winter, there may not be enough food to enable an endotherm to keep its metabolic rate stable all day, so some organisms go into a controlled state of hypothermia called hibernation, or torpor. This deliberately lowers the body temperature to conserve energy. In hot weather, endotherms expend considerable energy to avoid overheating: They may pant, sweat, lick, or seek shelter or water.

The advantages of endothermy are increased enzyme activity and a constant body temperature, allowing these animals to be active in cold temperatures. Biochemical processes are heat dependent. Generally, they go faster when it is warm and slower when it is cold. All biological functions, including muscle activity, are dependent on these chemical reactions. A chief advantage of being homeothermic is that internal chemical reactions function at an optimum level when the body of an animal maintains itself at or near its optimal temperature. This allows the creature to always think, move, digest, and do so with with its best possible speed and efficiency.

A prime disadvantage is the need to maintain thermoregulation, even during inactivity. That is, there is a greater requirement for energy. Being warm-blooded means that the organism must always consume large amounts of food energy. When the core temperature of a warm-blooded animal changes, even by a few degrees, the animal rapidly loses its ability to function. 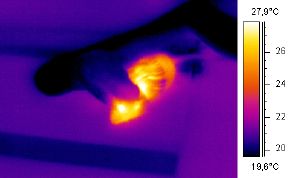 thermographic image: a coldblooded snake is eating a warmblooded mouse

. Mammals may spend eighty to ninety percent of their energy in maintaining a constant core temperature, with greater requirements for small mammals. In a cold climate, a small mammal is at a disadvantage in terms heat regulation, since heat loss is proportional to the surface area, but heat generation is proportional to mass (volume). As an organism increases in size, its surface area increases by the square of the multiplier but the volume is proportional to the cube of the multiplier. This may be a factor in the case of Bergmann's rule, which states that among mammals and birds, individuals of a particular species in colder areas tend to have greater body mass than individuals in warmer areas.

Another disadvantage of homeothermy is that it provides a constant temperature environment for cold-blooded parasites, such as insects, bacteria, viruses, protists, etc. Thus, mammals and birds suffer from more pests than reptiles and have had to develop strong immune systems.

Cold-blooded animals, such as fish and reptiles, are called ectotherms, meaning that they cannot control their internal temperature. An advantage of being cold-blooded is that an organism needs much less food. This enables it to survive famine, long ocean voyages, and shortages of prey when warm-blooded organisms would surely die. A disadvantage of being cold-blooded is that an organism needs to have multiple chemical pathways available to it, some of them for cooler temperature functioning, others for warm. A cold-blooded animal may move and react more slowly when the temperature is colder.

Between warm-blooded and cold-blooded

Scientific understanding of the multitude of thermal regulation regimes existing in the natural world has advanced greatly since the original distinction was made between warm and cold-blooded animals, and the issue has been studied much more extensively. For example, scientists now know that cold-blooded animals all use behavioral means to adjust their internal temperatures, often very effectively. There are also creatures that do not properly fall into either category.

Some examples of in-between creatures include: