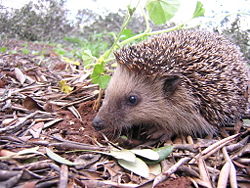 Hibernation is a state of inactivity (deep sleep) and metabolic depression in animals, typically in cold weather, and characterized by lower body temperature, slower heart beat and breathing, and lower metabolic rate. Hibernation helps to conserve energy during winter, when there is scarcity of food. So, it is also known as the energy saving mode or standby mode of life.

Hibernation is one of several types of dormancy, a general term used to describe a period in an organism's life cycle when metabolic activity is minimized and active development is temporarily suspended, such as estivation, diapause, brumation, and torpor. The distinction between these different types of dormancy, particularly between estivation (usually referring to dormancy under warm or drought conditions), hibernation (generally under winter conditions and from days to months in duration), and torpor (generally short term dormancy, including part of a day) are often blurred in the literature under the term hibernation.

While hibernation benefits the individual purpose of organisms and species to survive and reproduce, it also contributes to the ecosystem as well, acting as a form of sharing and conservation of resources. That is, more than just an escape from vigorous competition, it also constitutes wise sharing of the time, space, and limited winter resources with others.

During hibernation, animals drastically lower their metabolism so as to tap energy reserves stored as body fat at a slower rate. Hibernation may last several days or weeks depending on species, ambient temperature, and time of the year. As the winter comes to its end, the hibernator terminates its periods of hibernation by sporadic euthermic arousals wherein body temperature is restored to typical values. Thus, hibernation has a survival value for the animals.

Animals that hibernate include bats, ground squirrels and other rodents, mouse lemurs, the European Hedgehog and other insectivores, monotremes, and marsupials. Some species of mammals hibernate while gestating young, which are born shortly after the mother stops hibernating.

Historically, Pliny the Elder or Gaius Plinius Secundus (23-79 C.E.) expressed his belief in Natural History that swallows hibernated, and ornithologist Rev. Gilbert White (1720-1793) pointed to anecdotal evidence in The Natural History of Selborne that indicated as much. However, birds typically do not hibernate, instead utilizing torpor. An exceptional bird known as the Poorwill, however, does hibernate (Jaeger 1948).

There are animals that become dormant daily. Many tiny warm–blooded animals have huge energy requirements. It is difficult for some of them to consume enough food to maintain themselves. To conserve energy, animals like hummingbirds and little brown bats become dormant for part of each day. Such a daily torpor differs from hibernation in the length of the dormancy. Torpor is normally presented as short-term lowering of the metabolic rate. However, the two also differ in the degree of deepness of the sleep and the reduction of body temperature. Some scientists see torpor and hibernation as a continuum.

Some rattlesnakes, such as the Western Diamondback, are said to hibernate in caves every winter. However, the reptile species are better known to brumate, or undergo brumation, but the connection to this phenomenon with hibernation is not clear. In many instances, we find that hibernation has been the term extensively used for warm blooded birds and mammals, where as brumation been preserved for cold blooded animals like reptiles and others.

One animal that some famously consider a hibernator is the bear. However, during a bear's winter sleep state, the degree of metabolic depression is much less than what is observed in smaller mammals. Many prefer to use the term "denning" in place of hibernating. The bear's body temperature remains relatively stable (depressed from 37°C to approximately 31°C) and it can be easily aroused. In contrast, hibernating ground squirrels may have core body temperatures as low as -2° C. Still, there is much debate about this within the scientific community; some feel that black bears are true hibernators that employ a more advanced form of hibernation.

For a couple of generations during the twentieth century it was thought that basking sharks settled to the floor of the North Sea and hibernated; however, further research in 2003 dispelled this hypothesis, showing that the sharks actively traveled huge distances throughout the seasons, tracking the areas with the highest quantity of plankton (Sims et al. 2003). The epaulette sharks have been documented to be able to survive for long periods of time without oxygen, even being left high and dry, and at temperatures of up to 26 °C (Fox 2003). Other animals able to survive long periods without oxygen include the goldfish, the red–eared slider turtle, the wood frog, and the bar–headed goose (Fox 2003). They might have used hibernation or other forms of dormancy for survival.

Until recently, no primate, and no tropical mammal, was known to hibernate. However, animal physiologist Kathrin Dausmann of Philipps University of Marburg, Germany, and coworkers presented evidence in the June 24, 2004 edition of Nature, that the Fat–tailed Dwarf Lemur of Madagascar hibernates in tree holes for seven months of the year (Dausmann et al. 2004). This is interesting because Malagasy winter temperatures sometimes rise to over 30 °C (86 °F), which would mean that "hibernation" is not exclusively an adaptation to low ambient temperatures. However, hibernation is often presented as a cold weather phenomena, while estivation is the term reserved for that rare state of dormancy similar to hibernation, except that it happens during the months of the summer when environmental temperatures become too high for healthy physiological function to occur. Walter Arnold of The Research Institute for the Study of Wild Animals and Ecology at the University of Vienna and Gerhard Heldmaier, a physiologist at University of Marburg, Germany, have argued that winter sleep is the general reaction by mammals and other animals in stressful situations regardless of season (Bethge 2006).

The hibernation of the Fat-tailed Dwarf Lemur is strongly dependent on the thermal behavior of its tree hole: If the hole is poorly insulated, the lemur's body temperature fluctuates wildly, passively following the ambient temperature; if well insulated, the body temperature stays fairly constant and the animal undergoes regular spells of arousal. Dausmann found that hypo–metabolism in hibernating animals is not necessarily coupled to a low body temperature.

In October 2006, a Japanese man, Mitsutaka Uchikoshi, was believed to have been in a "denning"-like state for three weeks. He had fallen asleep on a snowy mountain and claimed he had only woken up after being discovered 23 days later; doctors who treated him believed his temperature had fallen to 22°C (71°F) during that period (Tabuchi 2006).

Winter is characterized by cold weather and a shortage of resources, especially food. Most animals either migrate to a favorable environment before the dawn of harsh conditions or develop suitable adaptations to cope with the conditions. Some halt their development and remain dormant to escape such situations, including hibernation.

Hibernation can be considered as the most economic choice to escape the extreme environmental conditions. Ecologists sometimes prefer to term hibernation as time migration. Thus, hibernation allows the animals to skip over the cold, stressful seasons, and only expend itself fully in those months of abundant food and moderate climatic conditions. The major disadvantage of hibernation is that the animal is left quite defenseless if it is not using a very secure, protected hibernating den, (known as the hibernaculum).

Signal and preparation for winter sleep

Hibernating animals have something in their blood called HIT, or Hibernation Inducement Trigger. Recent research suggests that it is some kind of opiate, chemically related to morphine. As the days get shorter, the temperature changes, and food becomes scarce, HIT triggers hibernation (SMS 1995). However, animals may display obligatory (predictive) hibernative responses as day length decreases, or enter their hibernative state only after being exposed to adversely environmental conditions (consequential hibernation).

Before entering hibernation, most species eat a large amount of food in the fall, while it is plentiful and store energy in fat deposits in order to survive the winter. Hibernators have two kinds of fat: Regular white fat and a special brown fat. The brown fat forms patches near the animal's brain, heart, and lungs. It sends a quick burst of energy to warm these organs firs, when it is time to wake up. Some store food in their burrows or dens, to eat when they wake for short periods. Most hibernating animals build themselves a nest (hibernaculum).

Turning down their metabolisms to minimal levels, hibernators lower their body temperature almost to that of the environment, slow down their heart beat and breathing, and tap energy reserves at a slower rate.

For example, a hibernating woodchuck's heart rate slows from 80 to 4 beats per minute, and its temperature drops from 37°C (98°F) to as low as 4°C (38°F). If its temperature falls too low, it will awaken slightly and shiver to warm up a bit. The Arctic ground squirrel also takes a break for a few hours from its temporary state of virtual death. The hibernating arctic ground squirrels may have core body temperatures as low as -2°C. Even in this "super–cooling," the body's fluids are held in a "meta–stable state" and are not allowed to freeze.

It is said that small animals can reduce their energy requirements by up to 98 percent by engaging in such behavior. Genetic sequences are no longer decoded in their cell nuclei, proteins are no longer synthesized, and entire reaction chains are essentially frozen. The immune system also practically ceases to operate. There is no longer any visible brain activity on an EEG (Bethge 2006).

During a bear's winter sleep, a grizzly or black bear's heart rate may drop from a normal of 40-50 beats per minute down to 8-12, its body temperature remains relatively stable (depressed from 37°C to approximately 31°C), and it can be easily aroused. These bears are also unique because, unlike other hibernators, they do not eat, drink, or excrete at all while hibernating, which can be as long as six months (SMS 1995).

The hibernators wake up in spring due to the warming of the environment and are typically in a very hungry state. In many mammals, an area rich in brown fat cell occurs near the thoracic blood vessels. Upon stimulation from sympathetic neurons, these cells conduct rapid aerobic oxidation of numerous fat droplets. The energy released in this way is particularly important to rapidly raise the core temperature during waking from hibernation (Taylot et al. 2000).

Noise and vibration from snowmobiles, all–terrain vehicles, and other motorized vehicles is said to sometimes disturb hibernating animals, who may suffer severely or die as a result of premature awakening in times of food shortage.