Caniformia is one of two suborders within the order Carnivora and consists of the "dog-like" carnivores, such as dogs, wolves, bears, weasels, and skunks. It also includes the aquatic pinnipeds (eared seals, earless seals, and walruses). The other suborder of Carnivora is Feliformia, the "cat-like" carnivores, such as felids (true cats), hyenas, mongooses, and civets. One shared characteristic distinguishes Carnivora from all other mammals: the possession of the four carnassial teeth in the front of the jaw. Caniforms are diagnostically distinguished from feliforms by having single-chambered or partially divided auditory bullae, composed of a single bone, while in feliforms the auditory bullae are double-chambered, composed of two bones joined by a septum. Caniforms typically possess a long snout and non-retractile claws in contrast to the feliforms.

Found all over the world, and very diverse—from pandas to seals to skunks to bears to domestic dogs—caniforms add greatly to the wonder of nature with their various forms and behaviors. They also are very important in terrestrial and aquatic food chains, whether as top predators or prey.

The Carnivora order is divided into the suborders Caniformia (dog-like) and Feliformia (cat-like). Feliformia includes such familes as Felidae (the "true cats"), Hyaenidae (hyenas and aardwolves), Herpestidae (mongooses), and Viverridae (true civets), and related extant and extinct taxa. Some of the major sub-groups within Caniformina are the families Canidae (dogs, wolves, and foxes), Ursidae (bears), Mustelidae (weasels, badgers, and otters), Mephitidae (skunks), Procyonidae (coatis and raccoons), as well as the pinnipeds, which include the families Phocidae (true or earless seals), Otariidae (eared seals: fur seals and sea lions) and Obobenidae (walrus). The pinnipeds are considered to have evolved from caniform ancestors and are accordingly assigned to this group.

Members of this group typically have non-retractile claws and tend to be plantigrade (walking with the podials and metatarsals flat on the ground), unlike the feliforms, which tend to have retractile (retractable) or semi-retractile claws and to be more digitigrade (walking on toes). Another trait that separates them from the Feliformia is that they have more teeth. They have a longer rostrum with less specialized carnassials. They tend more towards omnivorous and opportunity-based feeding, while the feliforms are more specialized in eating meat.

They typically are considered to be nine living families (three extinct and one once thought to belong to the group, the Hyaenidae), although some taxonomies differ (such as the placement of the red panda and the walrus). They are found all over the world (even when not counting dogs), even mainland Antarctica, as seals have no natural land predators so they can rest on land.

Ailuridae. The Family Ailuridae (the red panda) was once thought to be either part of the Procyonidae or the Ursidae. It now belongs to its own family. The red panda (Ailurus fulgens) is slightly larger than a domestic cat (55 centimeters long), with semi-retractable claws, and with a "false thumb," which is really an extension of the wrist bone. It is a mostly herbivorous mammal, specialized as a bamboo feeder. It is native to the Himalayas in Nepal and southern China. The giant panda (Ailuropoda melanoleuca) shares a similar common name, is also found in Asia, and also is largely herbivorous with a diet that is 99 percent bamboo, but it is part of the bear family, Ursidae. 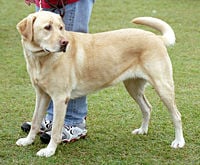 Canidae. The Family Canidae (canids, commonly known as either dogs or canines) includes wolves, dogs, foxes, coyotes, jackals, and so on. It is represented by 14 genera and about 34 species, including the only wild member of Carnivora in Australia in the form of the dingo (Fahey and Myers 2000). They tend to have an acute sense of smell, deep-chested bodies, a long muzzle, and moderately elongated legs and feet, as well as non-retractile claws and nearly a full set of teeth (Fahey and Myers 2000). Canids are the most social of all the caniforms, living in packs. The dog is the most diverse of all mammals in terms of body structure. 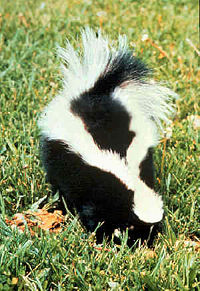 Mephitidae. The Family Mephitidae (the skunks and stink badgers), once thought to be part of the Mustelidae, is now a group in its own right. Extant members of this family are recognized by their striking color patterns and noxious odors. Generally black or brown, they typically have a prominent, contrasting pattern of white fur on their backs, faces, or tails; commonly they have a white stripe running from the head, down the back to the tail, or white spots (Wund 2005a). All mephitids have scent glands that are well-developed and produce noxious odors to deter predators (Wund 2005a). Mephitids tend to have a broad, squat body, a long rostra, short limbs, robust claws, and a thickly-furred tail (Wund 2005a). They are mainly omnivorous and nocturnal. There are four genera and 13 species, although some taxonomists place skunks in a subfamily within Mustelidae, and stink badgers have only recently been placed in this clade (Wund 2005a).

Mustelidae. The Family Mustelidae (the weasels, badgers, stoats, minks, wolverines, and otters) is the largest family within Carnivora with 56 species placed in 22 genera. They generally have elongate bodies with short legs and a short rostrum, and well developed anal scent glands (Wund 2005b). They range in size from the least weasel, which may weigh only from 35 to 250 grams (1.2 to 8.8 ounces), to the sea otter, which may reach 45 kilograms (99 pounds) (Wund 2005b). They occupy all continents except Australia and Antarctica, but are not found on Madagascar or oceanic islands (Wund 2005b). The members are famous for their fierce hunting instinct and (usually) streamlined body.

Odobenidae. The Family Odobenidae (the walrus) is characterized by the only non-seal pinniped and the only pinniped with tusks. Some classifications do place walruses in the family Phocidae with the true (earless) seals (McKenna and Bell 1997). Like other pinnipeds, walruses have both front and hind limbs in the form of flippers and need to come on land (or ice) to give birth and raise their offspring.

Otariidae. The Family Otariidae (the eared seals) are pinnipeds that are characterized by the presence of a pinna (small furry earflap, not found on the true seals of Phocidae), the ability to invert their hind-flippers under the body, aiding land movement, and a swimming motion using their long front flippers to propel them through the water. Extant eared seals comprise 16 species in seven genera commonly known either as sea lions or fur seals. Otariids are adapted to a semi-aquatic lifestyle, breeding and resting on land or ice, while feeding and migrating in the water.

Phocidae. The Family Phocidae (the true or earless seals) are pinnipeds that are characterized by the absence of a pinna (external part of ear, which are found in members of Otariidae), a sleek streamlined body highly adapted for aquatic life, a side-to-side swimming motion involving the hind-flippers and lower body, and hind-flippers that cannot be inverted forward under the body, making for slow and awkward motion on land. About ninety percent of all pinnipeds are phocids (Riedman 1990).

Procyonidae. The Family Procyonidae (the raccoons and coatis) have medium to long tails, short but erect ears, relatively short rostrums (but longer than felids) forefeet and hindfeet with five digits, short and curved claws that in some species can be partially retracted, and are plantigrade (Myers 2000). They range in size from less than one kilogram (2.2 pounds) to 20 kilograms (44 pounds) and are omnivorous (Myers 2000).

Ursidae. The Family Ursidae (the bears) are the largest of all the land caniforms. They range from the large polar bear (males, 775 to 1500+ pounds) to the small sun bear (males, 66 to 132 pounds) and from the endangered giant panda to the very common black bear. There are about eight species (depending on taxonomic scheme) placed into five genera (Ursus, Tremarctos, Melursus, Helarctos, and Ailuropoda) (Dewey and Myers 2005). They are large, robust animals, with small, rounded eyes, very short tails, and recurved, non-retractile claws, as well as plantigrade feet, with five digits on each foot (Dewey and Myers 2005).

The caniforms first appeared as tree-climbing, cat-like carnivores in the Paleocene (65–55 million years ago). Miacis was probably an early caniform.