Red panda is the common name for a mostly herbivorous, bamboo specialized mammal, Ailurus fulgens, that has soft, thick, reddish or reddish brown fur, a large, bushy, faintly ringed tail, and a somewhat raccoon or bear-like face. A member of the Carnivora order, generally the red panda is placed today in its own family, Ailuridae, although some place it in the raccoon family Procyonidae and it has been placed in the Ursidae family with the bears. It also is called the lesser panda, fire cat, and fat fox.

The red panda is endemic to the Himalayas in Bhutan, southern China, India, Laos, Nepal, and Burma. They generally are found in the slopes of the south of the Himalayas and the mountainous forests at altitudes of up to 4,800 meters, and generally do not venture below 1,800 meters.

Pandas provide benefits for the ecosystem and humans, thus reflecting functions beyond their own need for survival and reproduction. Ecologically, they are important components of food chains, being a source of food for snow leopards (Uncia uncia) and martens (Martes). For humans, they traditionally have been hunted in southwest China for their fur and especially the bushy tail, from which hats are produced. Culturally, the fur has been used in wedding ceremonies in Chinese locales where they are found. A main value to humans today is as popular attractions, whether in zoos or as seen in the wild.

However, currently the red panda is classified as endangered, with an estimated population of fewer than 2,500 mature individuals. Their population continues to decline due to habitat fragmentation, combined with poaching for their fur, and their low birth rate and high death rate in the wild. 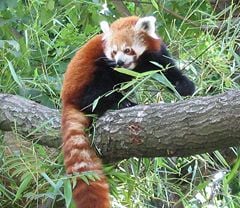 Red panda on a tree

The red panda has long and soft reddish-brown fur on the upper parts, blackish fur on the lower parts, and a light face with tear markings and white badges similar to those of a raccoon. Each individual can have distinctive markings.

It has a long bushy tail with six alternating yellowish red transverse ocher rings provides balance and excellent camouflage against its habitat of moss- and lichen-covered trees. The legs are black, short with thick fur on the soles of the paws hiding scent glands and serving as thermal insulation on snow-covered or ice surfaces. The red panda has strong, curved, and sharp semi-retractile claws standing inward for grasping of narrow tree branches, leaves, and fruit. Like the giant pandas (Ailuropoda melanoleuca), it has a “false thumb” that is an extension of the wrist bone. 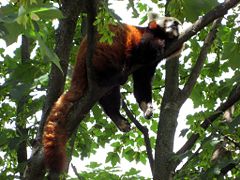 Red pandas are very skillful and acrobatic climbers that live predominantly in trees, where they will also forage, although they also will feed on the ground. They live in territories, frequently alone, and only rarely live in pairs or in groups of families. They are very quiet except for some twittering and whistling communication sounds.

Red pandas are crepuscular (most active at dawn and dusk). They are sedentary during the day, resting in the branches of trees and in tree hollows and increase their activity only in the late afternoon and/or early evening hours. They are very heat sensitive with an optimal “well-being” temperature between 17 and 25°C, and cannot tolerate temperatures over 25 °C at all. As a result, red pandas sleep during the hot noontime in the shady crowns of treetops, often lying stretched out on forked branches or rolled up in tree caves with their tail covering their face.

Red pandas search for food at night, running along the ground or through the trees with speed and agility and, after finding food, use their front paws to place the food into their mouths. Red pandas drink by plunging their paw into the water and licking their paws.

If a red panda feels threatened or senses danger, it will often try to scamper up into an inaccessible rock column or a tree. If they can no longer flee, they stand up on their hind legs, which makes them appear somewhat more daunting and allows them the possibility of using the razor-sharp claws on their front paws, which can inflict substantial wounds. Red pandas are friendly, but are not helpless, and will resist if they feel threatened. 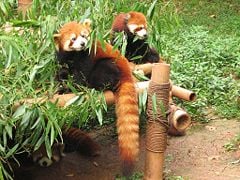 The red panda is a mostly herbivorous mammal, specialized as a bamboo feeder. Like the giant panda (Ailuropoda melanoleuca) of the bear family (Ursidae), the red panda cannot digest cellulose, so it must consume a large volume of bamboo to survive. Its diet consists of about two-thirds bamboo, but they also eat berries, fruit, mushrooms, roots, acorns, lichen, and grasses, and they are known to supplement their diet with young birds, fish, eggs, small rodents, and insects on occasion. In captivity they will readily eat meat. The red panda does little more than eat and sleep due to its low-calorie diet.

Bamboo shoots are more easily digested than leaves and exhibit the highest digestibility in the summer and autumn, intermediate in the spring, and low in the winter. These variations correlate with the nutrient contents in the bamboo. The red panda poorly processes bamboo, especially the cellulose and cell wall components. This implies that microbial digestion plays only a minor role in its digestive strategy. The transit of bamboo through the red panda gut is very rapid (~2–4 hours). In order to survive on this poor-quality diet, the red panda has to select high-quality sections of the bamboo plant, such as the tender leaves and shoots in large quantities (over 1.5 kilograms, 3 pounds, of fresh leaves and 4 kilograms, 9 pounds, of fresh shoots daily) that pass through the digestive tract fairly rapidly so as to maximize nutrient intake (Wei et al. 1999).

The red panda is a solitary animal, usually seeking a partner only for mating from the end of December to the middle of February. After a gestation period of 112 to 158 days, the female gives birth to one to four blind cubs weighing 110 to 130 grams (3.5-4.6 ounces). This occurs between the end of May to the beginning of July. A few days before the birth, the female begins to collect material, such as brushwood and grass, to use for the nest. The nest is normally located in a hollow tree or a rock column.

After the birth, the mother cleans the cubs and in this way can immediately recognize each by knowing its smell. After one week, the mother leaves the nest to clean herself. The cubs start to open their eyes about 18 days later, but not fully until 30 to 40 days. The eyes are first gray, and after six weeks slowly start to turn dark in color, becoming fully darkened in about 70 days. The new litter remains at the nest for twelve weeks. After they leave the nest, they will remain with their mother, weaning around 6 to 8 months of age.

The cubs will stay with their mother until the next cubs are born the following summer. The males only very rarely help with the raising of the new generation, and only if they live in pairs or in small groups.

Red pandas start to become sexually mature at about 18 months of age and are fully mature at 2 to 3 years. Their average lifespan is 8 to 10 years but can reach a maximum of 15 years.

Frédéric Georges Cuvier first described Ailurus as belonging to the raccoon family in 1825 and this classification has been controversial ever since (Mayr 1986). It was classified in the raccoon family (Procyonidae) because of morphological similarities of the head, colored ringed tail, and other morphological and ecological characteristics. Then, it was assigned to the bear family (Ursidae) (Wilson and Reeder 1993). The most recent molecular-systematic DNA research places the red panda into its own independent family Ailuridae. Ailuridae, a family in the mammal order Carnivora, includes only the red panda as an extant (living) member, but also includes its extinct relatives.

Ailuridae commonly is seen as part of a trichotomy within the broad superfamily Musteloidea that that also includes the Mephitidae + Mustelidae (skunks + weasels) and the Procyonidae (raccoons) (Flynn et al. 2000). Unlike the giant panda, it is not a bear (Ursidae) (Flynn et al. 2000).

There are two extant subspecies of red panda: the Western red panda (Ailurus fulgens fulgens) that lives in the western part of its range, and the somewhat larger Styan's red panda (Ailurus fulgens styani) that lives in the east-northeastern part of its range. The Western red panda has lighter pelage, especially in the face, while the Styan's red panda has more dramatic facial markings. The effective population size in the Sichuan population is larger and more stable than that in the Yunnan population, implying a southward expansion from Sichuan to Yunnan (Su et al. 2001).

The taxonomic classification of both the red panda and giant panda has been under debate for many decades, as both species share characteristics of both bears and raccoons. However, they are only very distantly related by remote common ancestry from the Early Tertiary Period. The red panda's common ancestor can be traced back to tens of millions of years ago with a wide distribution across Eurasia. Fossils of the red panda have been unearthed from China in the east to Britain (Parailurus anglicus) in the west, and most recently a handful of fossils (Pristinailurus bristoli, Miocene, considered to be a new genus and species of the red panda) have also been discovered in North America (ETSU 2008; Wallace and Wang 2004). 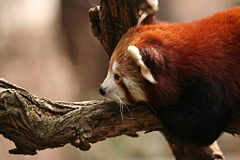 Red panda at the Bronx Zoo

Red pandas are classified as endangered. No reliable numbers exist for the total population, but it is very threatened due to the fragmentation of its natural habitats, their small numbers, and their food specialization needs. In southwest China, the red panda is hunted for its fur and especially for its highly-valued bushy tail from which hats are produced. In the areas of China where the red panda lives, their fur is often used for local cultural ceremonies and in weddings the bridegroom traditionally carries the hide. The "good-luck charm" hats are used by Chinese newlyweds.

Such hunting for their pelts, and the continuous clearing of the forests has significantly reduced the population. It is now protected in all countries in which it lives, and the hunting of red pandas is illegal everywhere. Nevertheless, poaching continues and they are often illegally hunted and sold to zoos. The IUCN has mandated that small pandas are a “threatened species“ since 1996; however, it is now listed as endangered. While difficult to estimate the total population size, one can assume that they cannot bear much more of a habitat change and that they are in danger of extinction due to the disappearance of the forests and hunting for their highly-valued tails and fur. Red pandas have a naturally low birth rate (usually single or twin births per year) and a high death rate in the wild.