Jackal is the common name for Old World, coyote-like mammals in any of three species in the genus Canis of the family Canidae: Canis aureus (golden jackal), Canis adustus (side-striped jackal), and Canis mesomelas (black-backed jackal). These small to medium-sized canids, with long legs and curved canine teeth, are found in Africa, Asia, and southeastern Europe. The name jackal sometimes also is applied to a fourth canid species, Canis simensis, which may be known as the Simien jackal, Abyssinian wolf, red fox, or Ethiopian wolf. However, this species generally is considered closer to the wolf (also a member of the Canis genus) and is not considered in this article.

All species of jackal are capable predators. (All three hunt rodents and small mammals regularly, with the golden and black-backed species known to hunt poisonous snakes, large ground birds such as bustards, and mammals as large as young antelope. Some also take some vegetative matter, such as berries.) However, their popular image as scavengers has resulted in a negative public image. 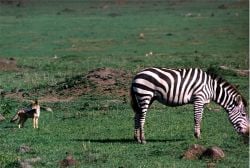 Zebra and jackal in Ngorongoro CraterTanzania

The genus to which jackals belong, Canis, contains about 7 to 10 extant species and many extinct species, including wolves, dogs, coyotes, and dingoes. The jackal generally is applied to members of any of three (sometimes four) small to medium-sized species of the family Canidae, found in Africa, Asia and southeastern Europe (Ivory 1999).

Jackals fill a similar ecological niche to the coyote in North America, that of predators of small to medium-sized animals, scavengers, and omnivores. Their long legs and curved canine teeth are adapted for hunting small mammals, birds, and reptiles. Big feet and fused leg bones give them a long-distance runner's physique, capable of maintaining speeds of 16 kilometers/hour (10 miles per hour) (just over 6 minutes/mile) for extended periods of time. They are nocturnal, most active at dawn and dusk.

In jackal society, the social unit is that of a monogamous pair that defends its territory from other pairs. These territories are defended by vigorously chasing intruding rivals and marking landmarks around the territory with urine and feces. The territory may be large enough to hold some young adults who stay with their parents until they establish their own territory.

Did you know?
The jackal is one of the few mammals that has a long-term mate

Jackals may occasionally assemble in small packs, for example to scavenge a carcass, but normally hunt alone or as a pair. 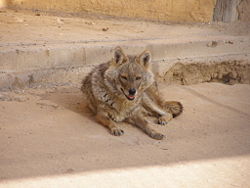 The golden jackal (Canis aureus), also called the Asiatic, oriental, or common jackal, is native to north and east Africa, southeastern Europe, and South Asia to Burma. It is the largest of the jackals, and the only species to occur outside Africa, with 13 different subspecies being recognized (Wozencraft 2005).

The golden jackal's short, coarse fur is usually yellow to pale gold and brown-tipped, though the color can vary with season and region. On the Serengeti Plain in Northern Tanzania for example, the golden jackal's fur is brown-grizzled yellow in the wet season (December-January), changing to pale gold in the dry season (September-October) (Ivory 1999). Jackals living in mountainous regions may have a grayer shade of fur (Jhala and Moehiman 2005). 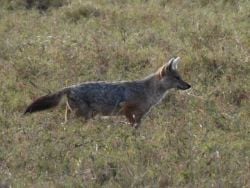 The golden jackal generally is grouped with the other jackals (the black-backed jackal and the side-striped jackal), although genetic research suggests that the golden jackal is more closely related to a "wolf" group that also includes the gray wolf (and the domestic dog) and the coyote (Lindblad-Toh et al. 2005).

Results from recent studies of mDNA from golden jackals indicate that the specimens from Africa are genetically closer to the gray wolf than are the specimens from Eurasia (Koepfli et. al. 2015). The genetic evidence is consistent with the form of the skull, which also bears more similarities to those of the coyote and the gray wolf than to those of the other jackal species. As a result it has been suggested that the six C. aureus subspecies found in Africa should be reclassified under the new species C. anthus (African golden wolf), reducing the number of golden jackal subspecies to seven. 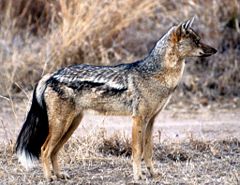 The side-striped jackal (Canis adustus) is native to central and southern Africa (Wozencraft 2005). it is a grayish brown to tan with a white stripe from the front legs to the hips and has a dark tail that has a white tip. The side-striped Jackal can weigh from 6.2 to 13.6 kilograms (14 to 30 pounds), with males tending to be larger than the females. It is social within small family groups, communicating via yips, "screams," and a soft owl like hooting call. It is nocturnal, and rarely active during the day.

The side-striped jackal lives in the damp woodland areas along with grassland, bush, and marshes. It eats fruit, insects, and small mammals such as rats, hares, and birds. It will go for the young of larger animals such as warthogs and gazelles. It also will often follow big cats to scavenge their kills, but has never been observed taking down larger prey on its own.

The breeding season for this species depends on where they live; in southern Africa breeding starts in June and ends in November. The side-striped Jackal has a gestation period of 57 to 70 days with average litter of 3 to 6 young. The young reach sexual maturity at 6 to 8 months old and typically begin to leave when 11 months old. The side-striped jackal mates for life, forming monogamous pairs. 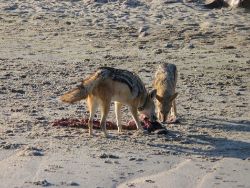 The black-backed jackal (Canis mesomelas), also known as the silver-backed jackal, inhabits two areas of the African continent separated by roughly 900 kilometers. One region includes the southern-most tip of the continent including South Africa, Namibia, Botswana, and Zimbabwe. The other area is along the eastern coastline, including Kenya, Somalia, and Ethiopia (Fishman 2000).

As its name suggests, the species' most distinguishing feature is the silver-black fur running from the back of the neck to the base of the tail. The chest and under parts are white to rusty-white, whereas the rest of the body ranges from reddish brown to ginger. Females tend not to be as richly colored as males, like many other animals, such as ducks. The winter coat of adult males develops a reddish to an almost deep russet red color (Fishman 2000).

The black-backed jackal is noticeably more slender than other species of jackals, with large, erect, pointed ears. The muzzle is long and pointed. The dental formula is 3/3-1/1-4/4-2/3=42 (Loveridge and Nel 2005). Scent glands are present on the face and the anus and genital regions. The Black-backed Jackal has 6-8 mammae.

The black-backed jackal usually lives together in pairs that last for life, but often hunts in packs to catch larger prey such as the Impala and antelopes. It is very territorial; each pair dominates a permanent territory. It is mainly nocturnal, but the black-backed Jackal comes out in the day occasionally.

These jackals adapt their diets to the available food sources in their habitat. It often scavenges, but it is also a successful hunter. Its omnivorous diet includes, among other things the Impala, fur seal cubs, gazelles, guineafowls, insects, rodents, hares, lizards, snakes, fruits and berries, domestic animals such as sheep and goats, and carrion. As with most other species of small canids, jackals typically forage alone or in pairs. When foraging, the black-backed Jackal moves with a distinctive trotting gait.

Its predators include the leopard and humans. Jackals are sometimes killed for their furs, or because they are considered predators of livestock.

Anubis, the jackal headed god of the dead.

The Egyptian god of embalming, Anubis, was portrayed as a jackal-headed man, or as a jackal wearing ribbons and holding a flagellum, a symbol of protection, in the crook of its arm. Anubis was always shown as a black jackal or dog, even though real jackals are typically tan or a light brown. To the Egyptians, black was the color of regeneration, death, and the night. It was also the color that the body turned during mummification. The reason for Anubis' animal model being canine is based on what the ancient Egyptians themselves observed of the creature—dogs and jackals often haunted the edges of the desert, especially near the cemeteries where the dead were buried. In fact, it is thought that the Egyptians began the practice of making elaborate graves and tombs to protect the dead from desecration by jackals.

The Greeks god Hermes and the monster Cerberus are thought to derive their origins from the golden jackal (Jhala and Moehiman 2005).

The jackal is mentioned frequently in the Bible, where it is portrayed as a sinister creature, most notably in Psalm 63:9-11, where it is stated that non-believers would become food for the jackals. In his book Running with the Fox, David W. Macdonald theorizes that due to the general scarcity and elusiveness of foxes in Israel, the author of the Book of Judges may have actually been describing the much more common golden jackals when narrating how Samson tied torches to the tails of 300 foxes to make them destroy the vineyards of the Philistines.

The expression "jackalling" is sometimes used to describe the work done by a subordinate in order to save the time of a superior. (For example, a junior lawyer may peruse large quantities of material on behalf of a barrister.) This came from the tradition that the jackal will sometimes lead a lion to its prey. In other languages, the same word is sometimes used to describe the behavior of persons who try to scavenge scraps from the misfortunes of others; for example, by looting a village from which its inhabitants have fled because of a disaster.

Retrieved from https://www.newworldencyclopedia.org/p/index.php?title=Jackal&oldid=1020061
Categories:
Hidden category:
This page was last edited on 29 May 2019, at 20:39.
Content is available under Creative Commons Attribution/Share-Alike License; additional terms may apply. See Terms of Use for details.