Tokelau is a dependent territory of New Zealand in the southern Pacific Ocean that comprises a group of three tropical coral atolls. The name "Tokelau" means "north-northeast" in the Tokelauan language. The islands are occasionally referred to by an older colonial name, "The Union Islands," and until 1976 the official name was "Tokelau Islands." The Tokelauan way of life, in three crowded villages on about four square miles (10.8 square kilometers) of land, is Polynesian culture at its most untouched.

Tokelau comprises three unbroken rings of coral that lie along a 90 mile (150 kilometer) northwest–southeast axis, separated from each other by about 40 to 55 miles (60km to 90km) of open sea. The three atolls are located in the South Pacific Ocean approximately midway between Hawaii and New Zealand. They lie about 300 miles (500km) north of Samoa.

The islands are Atafu (at one time known as the Duke of York Group), Nukunonu (also the Duke of Clarence Group), and Fakaofo (once Bowditch Island). Among them they have a land area totaling about four square miles (10.8 square kilometers). They have no airports, seaports, or harbors.

The climate is tropical, moderated by trade winds from April to November. The average daily temperature year-round is about 82 °F (28 °C); the temperature varies by no more than ten °F (4-5 °C). Rainfall is sporadic and can be quite heavy with as much as three to four inches (80 mm) falling in a day. The terrain comprises low-lying coral atolls enclosing large lagoons, the highest point is an un-named location about 16 feet (five meters) above sea level.

Tokelau lies in the Pacific typhoon belt. No significant land is more than six feet (two meters) above high water of ordinary tides. This means Tokelau is particularly vulnerable to any possible sea level rises; it is speculated that Tokelau will disappear by the end of the twenty-first century due to sea-level changes brought about by global warming. Very limited natural resources and overcrowding are contributing to emigration to New Zealand.

There is no capital. Each atoll has its own administrative center.

Tokelau was originally settled by Polynesians migrating from other island groups. Samoan missionaries arrived in the nineteenth century. The islands became a British protectorate in 1889 and then were annexed to the British colony of Gilbert and Ellice Islands in 1916 and then transferred to New Zealand's administration in 1926.

By the Tokelau Act of 1948, sovereignty over Tokelau was transferred to New Zealand. Defense is also the responsibility of New Zealand. However, the Tokelauans are drafting a constitution and developing institutions and patterns of self-government as Tokelau moves towards free association with New Zealand, as have Niue and the Cook Islands.

In late February and early March of 2005, Tokelau was struck and severely damaged by Cyclone Percy. It was stronger than forecast and stayed in the vicinity for longer than had been predicted. It coincided with a spring tide that put most of the area of the two villages on Fakaofo and Nukunonu under more than three feet (one meter) of seawater. The cyclone caused widespread erosion on several islets of all three atolls, damaging roads and bridges, and disrupting electric power and telecommunications systems. There was also significant and widespread damage to food crops. No one was seriously injured but villagers lost significant amounts of property. Tokelau is a self-administering territory of New Zealand. The head of state is Charles III, who is represented by an administrator, appointed by the New Zealand Minister of Foreign Affairs and Trade. The head of government, chosen from and presiding over the Council of Faipule, is rotated annually. The council, consisting of three elected leaders, one from each atoll, functions as a cabinet.

The Tokelau Amendment Act of 1996 confers legislative power on the General Fono, a unicameral body of 45 seats. Each atoll's Council of Elders, or Taupulega, chooses 15 representatives to serve three-year terms.

The United Nations Committee on Decolonization includes Tokelau on the United Nations list of Non-Self-Governing Territories. On November 11, 2004, Tokelau and New Zealand took steps to formulate a treaty that would turn Tokelau into a self-governing state in free association with New Zealand. A UN sponsored referendum on whether Tokelau should opt for free association failed to reach the two-thirds majority required for the measure to pass. A repeat referendum is planned for early 2008.

A fourth island, historically and geographically, but not politically, part of the Tokelau chain is Swains Island (Olohega), part of American Samoa since 1935. The island was claimed by the US pursuant to their Guano Islands Act. However, in the draft constitution subject to the Tokelau self-determination referendum, 2006, Swains Island is again claimed as part of Tokelau. 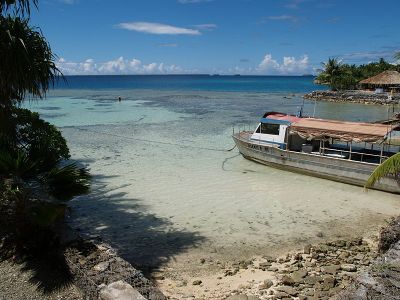 A large number of Tokelauan people live in New Zealand and support their families in Tokelau by remittances. 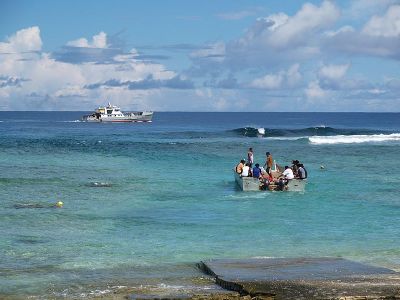 Since there are no harbors, cargo is transferred by small boats to cargo ships positioned on the down-wind (leeward) side of the islet. The boats are rowed through a narrow channel in the reef. This landing is subject to ocean swell and beaching the reef requires considerable skill and often results in damage from the sharp coral. For transit among the atolls, Tokelauans rely on traditional outrigger canoes.

Tokelau has radiotelephone service between the islands and to Samoa, and in 1997 established a government-regulated telephone service (TeleTok) with three satellite earth stations. Each atoll has a radio-broadcast station that broadcasts shipping and weather reports and every household has a radio or access to one.

Tokelau has an internet country code top-level domain (ccTLD), .tk, and makes money for the island by selling domain names. However, to gain publicity, Tokelau gives away most domain names under its authority. Free domains are pointed to Tokelau that redirect HTTP traffic via HTML frames to a specified web page and redirects five email addresses to external addresses. Only paid domains get the option of using a different name server (enabling more services and disabling the web or email forwarding). In September 2003, Fakaofo became the first part of Tokelau with a high-speed internet connection. The service is free for everyone. Foundation Tokelau finances the project.

Tokelauans are closely related to Tuvaluans, Samoans, and Cook Islanders. The sprinkling of European surnames is the legacy of the whalers and beachcombers who visited in the late nineteenth century.

Limited natural resources and overcrowding are contributing to emigration to New Zealand, resulting in a population decline every year. Depletion of tuna has made fishing for food more difficult.

Virtually all residents marry for life. The domestic unit is an expanded nuclear family. All children inherit rights from both parents. Children are closely disciplined and precisely instructed. Obedience to one's elders and restraint between cross-sex siblings is expected. Physical aggression is abhorred. 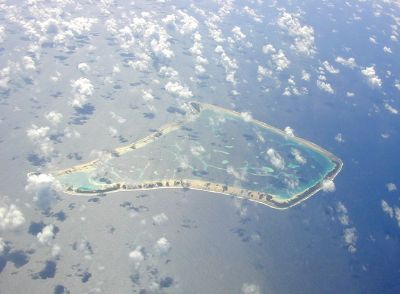 The atoll of Fakaofo, southernmost of the Tokelau Islands.

Before the arrival of Christianity, Tokelauans worshiped a god called Tui Tokelau, along with the usual pantheon of Polynesian gods. A coral slab personifying Tui Tokelau still stands in the village of Fakaofo. All the inhabitants on the island of Atafu are members of the Congregational Christian Church of Samoa. On Nukunonu, all are Roman Catholic. On Fakaofo, both denominations are present with the Congregational Christian Church predominant. Both Protestant and Catholic congregations practice a fundamentalist form of Christianity. Churches are revered sites with frequent services.

An egalitarian ethic overrides differences in wealth among a growing better-educated, better-paid elite. They give generously to village and family enterprises and don't flaunt their wealth.

"Faka Tokelau," the Tokelauan way of life, is Polynesian culture at its most untouched, as a result of the atolls' isolation and New Zealand's hands-off administration, according to ethnologist Judith Huntsman. Villages, which are extremely crowded, include a meeting-house, a church, an administration compound that houses a clinic, a school, a communications center (formerly a two-way radio), a cooperative store, and offices for administrative and elected officers.

Huntsman describes the typical houses as rectangular single-room structures on raised coral-filled foundations and aligned with the straight footpaths. Until the 1970s, the houses were open buildings constructed of local timber and pandanus-leaf thatch, with plaited coconut frond blinds that could be lowered against wind and rain. The houses have become increasingly closed-in, built of imported timber, concrete, and corrugated iron, sometimes with louvered glass windows. They have mats plaited from pandanus or coconut leaves, upon which the occupants sit and lounge. There are rolled-up sleeping mats, locked wooden boxes for clothes and personal belongings, and chairs, tables, and bedsteads. Separate cookhouses are built of local materials.

Land is held by kin groups and managed by persons with recognized positions within those groups. Women manage the houses. Men manage and harvest plantations. Virtually everyone has rights to land and to a share of the crop. Most belong to more than one kin group and many receive produce from several kin groups, Huntsman explains.

Village management of aid projects, for which all village workers are paid, has eroded the distinction between paid and unpaid work. Age determines who does what, who directs, and who labors. Widespread public service employment has changed the traditional pattern of men fishing and harvesting, and women managing the family. Both men and women work in skilled jobs, and most unskilled workers are men, according to Huntsman.

All children attend village primary and secondary schools, and many continue schooling abroad.

Oral narratives may be fictional stories or recountings of the past. In the traditional arts, women work in fiber, and men work in wood. The best-known form of Tokelauan folk music is “fatele,” a dance performed at many community gatherings and events. Fatele is performed by a group, accompanied by “pokihi” (wooden box) and “apa” (biscuit tin), used as a percussion instrument. Each song begins with a stanza that is repeated up to a half-dozen times, followed by increased pitch and tempo. This tradition is shared with the music of Tuvalu. Log drums ("pate") are also played. The most famous Tokelaun musical group is probably Te Vaka.