American Samoa is an unorganized, incorporated territory of the United States, located in the South Pacific Ocean southeast of the sovereign state of Samoa. The native inhabitants are descended from seafaring Polynesians who populated many islands in the South Pacific.

It is a destination spot of many vacationers due to its seasonally sublime climate and miles of clear sandy beaches. American Samoan people are typically friendly and welcoming. Their culture is family centered and deeply Christian.

American Samoa is a group of islands in the South Pacific Ocean, located east of the International Date Line and south of the equator, about halfway between Hawaii and New Zealand. American Samoa is the location of Rose Atoll, considered by some as the southernmost point in the U.S. including all insular areas and territories.

The total land area is 199 km², making it slightly larger than Washington, DC, and comprises five volcanic islands with rugged peaks and limited coastal plains, as well as two coral atolls. Island names in order of size are Tutuila, Ta'u, Ofu, Olosega, Aunuu, Swains Island, and Rose Atoll. The islands have a tropical marine climate, moderated by southeast trade winds. Annual rainfall averages about 3 meters. American Samoa enjoys two seasons. The rainy season lasts from November to April, and the dry season from May to October. There is little seasonal temperature variation. During the rainy season there is a hurricane season lasting from December until March. Hurricane Heta struck Tutuila and Manu'a in 2004.

Fresh water resources are limited. The water division of the government has spent substantial funds in the past few years to expand well systems, and improve water catchments and pipelines. Forests and woodland cover 70 percent of the land, 10 percent is in permanent crops, and five percent is arable land. The city of Pago Pago (pronounced PAYN-go PAYN-go) has one of the best natural deepwater harbors in the South Pacific Ocean. It is sheltered from rough seas and protected from high winds by peripheral mountains.

The first Polynesians to arrive in the Samoan islands came island-hopping over several generations from Southeast Asia more than 4,000 years ago. From there, they migrated east toward the Society Islands, north towards Hawaii, and southwest towards New Zealand. Samoa enjoys a rich history, preserved in folklore and myth, of ocean voyages, conquests of other islands, and war with the Kingdom of Tonga and Fiji.

Contact with Europeans began in the early 1700s and intensified with the arrival of British missionaries and traders in the 1830s. Then, Samoans were perceived as savage and warlike, as they clashed with the French, German, British, and American sailors who valued Samoa as a refueling station for coal-fired shipping.

Until about 1860, Samoa was ruled by tribal chiefs known as matai. International rivalries in the latter half of the nineteenth century were settled by an 1899 Treaty of Berlin in which Germany and the U.S. divided the Samoan archipelago. The U.S. formally occupied its portion—a smaller group of eastern islands with the noted harbor of Pago Pago—the following year in 1900. The western islands are now the independent nation of Samoa.

During World War II, U.S. Marines in American Samoa outnumbered the local population and had a huge cultural influence on the islands. After the war, Organic Act 4500, a U.S. Department of Interior-sponsored attempt to incorporate American Samoa, was defeated in Congress, primarily through the efforts of American Samoan chiefs, led by Tuiasosopo Mariota. These chiefs' efforts led to the creation of a local legislature, the American Samoa Fono.

In time, the Navy-appointed governor was replaced by a locally elected one. Although technically considered "unorganized" in that the U.S. Congress has not passed an Organic Act for the territory, American Samoa is self-governing under a constitution that became effective in 1967. The U.S. Territory of American Samoa is on the United Nations list of Non-Self-Governing Territories, a listing disputed by territorial government officials. 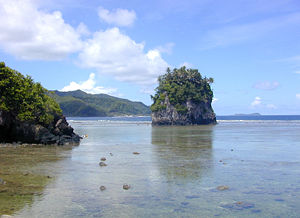 Fatu Rock (right) and Futi Rock (left), islets on the reef of Tutuila at the entrance to Pago Pago Harbor (seen behind Fatu)

American Samoa has a traditional Polynesian economy in which more than 90 percent of the land is communally owned. Economic activity is strongly linked to the United States with which American Samoa conducts most of its foreign trade.

Transfers from the U.S. government add substantially to American Samoa's economic well-being. Goods manufactured in territories or protectorates of the U.S., including American Samoa, can be labeled "Made in the USA." Attempts by the government to develop a larger and broader economy are restrained by Samoa's remote location, its limited transportation, and its devastating hurricanes. Tourism is a promising sector.

Tuna fishing and tuna processing plants are the backbone of the private sector, with canned tuna the primary export. Canned tuna make up 98 percent of exports. Export partners are Samoa at 40 percent, Australia at 20 percent, Japan at 15 percent, and New Zealand at 11 percent.

Persons born in American Samoa are U.S. nationals, but not U.S. citizens. This is the only circumstance under which an individual would be one and not the other.

The population of American Samoa is approximately 55,000 people, 95 percent of whom live on the largest island, Tutuila.

The majority of Samoans are Christians. Although some of the practices of traditional, animistic religions may still be followed, these traditional religions have virtually disappeared. Of the religious denominations, Christian Congregationalist make up 50 percent, Roman Catholic 20 percent, while Protestants and other groups make up the other 30 percent. The Church of Jesus Christ of Latter-day Saints reports membership of around 16,000 or one-quarter or the whole population, accounting for most of the other Christians.

Education is free and compulsory for all children between the ages of six and 18, and as a result 97 percent of the population over the age of 15 can read and write. There are about 30 public schools, six private schools, and 160 village schools for early education, as well as a community college.

Did you know?
American Samoa is the location of early twentieth-century American anthropologist Margaret Mead's controversial study, "Coming of Age in Samoa."

A village of 600 people on the island of Ta'u was the site of a celebrated study by American anthropologist Margaret Mead, in which she got to know, lived with, observed, and interviewed (through an interpreter), 68 young women between the ages of nine and 20. In Coming of Age in Samoa, Mead concluded that the passage from childhood to adulthood (adolescence) in Samoa was a smooth transition and not marked by the emotional or psychological distress, anxiety, or confusion seen in the U.S. The book upset many Westerners when it first appeared in 1928. Many American readers felt shocked by her observation that young Samoan women deferred marriage for many years while enjoying casual sex, but eventually married, settled down, and successfully reared their own children.

In 1983, five years after Mead had died, Derek Freeman, an anthropologist from New Zealand, published Margaret Mead and Samoa: The Making and Unmaking of an Anthropological Myth, in which he challenged all of Mead's major findings. Anthropologists, even those who might have been critical of Mead's methods, rallied in support of her. The American Anthropological Association declared Freeman's Margaret Mead and Samoa "poorly written, unscientific, irresponsible and misleading." In the years that followed, anthropologists vigorously debated the issues raised in these studies but generally continued to criticize Freeman (see for example Holmes 1988).

The Fa'a Samoa, or traditional Samoan way, remains a strong force in Samoan life and politics. Fa'a Samoa consists of aiga (the family), tautala Samoa (the Samoan language), gafa (genealogies), matai (the chiefly system), lotu (the church), and fa'alavelave (ceremonial and other family obligations). Associated are the values of alofa (love), tautua (service), fa'aaloalo (respect), feagaiga (a covenant between siblings and others) and usita'i (discipline). The aiga or extended family lives and works together. Elders in the family are greatly respected and hold the highest status.

They have a communal way of life with little privacy. The traditional fales (houses) have no walls. Blinds made of coconut leaves are used during the night or bad weather. Up to 20 people may sleep on the ground in the same fale. During the day, the fale is used for chatting and relaxing.

Sundays are a day of rest, and many families congregate to share a traditional Sunday umu (a meal cooked in a rock oven). In a traditional household, the older members of the family will sit and eat first, and as the meal continues the younger members and then children are invited to eat. The umu contains an abundance and variety of dishes ranging from fresh seaweed and crayfish to baked taro and rice. Coconut appears in many Samoan dishes, for example, palusami, a parcel of corned beef, breadfruit, onions, and taro leaves wrapped in breadfruit leaves and coconut cream and baked in the umu. This is eaten in its entirety, including the leaves.

Samoan handicrafts include the siapo (equivalent to the Fijian tapa) which is made from beaten mulberry bark, with patterns or pictures of fish, turtles, and hibiscus flowers painted on with a natural brown dye. The siapo may be used for clothing, for wrapping objects, and even simply for decorative reasons. Kava bowls are sturdy, round wooden bowls made of varying sizes, and have many short legs around them.

Kava, a ground natural extract from the pepper plant root with medicinal and slightly anesthetic properties, is made up with water in the bowl and drank socially using coconut shells.

The traditional Samoan dance is the siva. This is similar to the Hawaiian dance, with gentle movements of the hands and feet in time to music and which tells a story.

The traditional ladies' clothing is the puletasi, which is a matching skirt and tunic with Samoan designs. The lava lava is a sarong which may be worn by men or women. They are of different patterns and colors, but tend to be plain for men who may wear it as part of an official uniform. Some men have intricate and geometrical patterns tattooed onto their lower body and upper legs. The tattooing process is performed without any anesthesia and is said to be painful.

Canoes have been a feature of Samoan culture. The double war canoe, or alia, built with a deck joining two large canoes together, could hold 300 or more men. The last alia to float in Samoan waters is preserved as a tourist attraction. Canoes are used extensively. Some are large enough to carry whole families; some are streamlined to catch tuna, while others are light enough for one person to carry.

About 30 ethnic Samoans, many from American Samoa, currently play in the National Football League. It has been estimated that a Samoan male (either an American Samoan or a Samoan living stateside) is 40 times more likely to play in the NFL than a non-Samoan American. A number have also ventured into professional wrestling.