Bo Diddley (December 30, 1928 – June 2, 2008), born Ellas Otha Bates, was an influential American rock and roll singer, songwriter, and guitarist. Often cited as a key figure in the transition from blues to rock and roll, he introduced insistent, driving rhythms and a hard-edged guitar sound. Known for his music's powerful, rumba-like beat, he was also famous for his characteristic rectangular guitar and wild stage antics.

Mississippi-born, Diddley started playing the guitar after hearing bluesman John Lee Hooker in Chicago. He began playing on street corners and then performed regularly at a South Side Chicago club. Influenced by Hooker, Muddy Waters, and band leader Louis Jordan, he recorded "Bo Diddley" and its flip side, the Waters-inspired I'm A Man" at Chess Records. The record became a number-one hit on the R & B charts and crossed over to the pop audience as well.

In the 1950s and 1960, Diddley became a musical force with albums like Bo Diddley Is a Gunslinger and Have Guitar, Will Travel. Numerous artists incorporated his trademark rhythm guitar hook, including Elvis Presley, Buddy Holly, the Rolling Stones, and many later stars. In his later years, Diddley continued to perform, conducting a world tour in 2005 to celebrate 50 years in music. He was inducted into the Rock and Roll Hall of Fame in 1987.

Born Ellas Otha Bates[1] in McComb, Mississippi, Bo Diddley was adopted and raised by his mother's cousin, Gussie McDaniel, whose surname he adopted, becoming Ellas McDaniel. The family moved to Chicago when he was seven. He took violin lessons as a youth, but was inspired to become a guitarist after seeing John Lee Hooker perform.

He worked as a carpenter and mechanic, but also began a musical career playing on street corners with friends as a band called the Hipsters (later the Langley Avenue Jive Cats). In 1951, he landed a regular spot at the 708 Club on Chicago's South Side, with a repertoire influenced by John Lee Hooker, Muddy Waters, and band leader Louis Jordan. He adopted the stage name "Bo Diddley," a nickname linked to several southern slang expressions, including the diddley bow, a primitive one- or two-stringed fretless instrument that was used in the south by black musicians.

In late 1954, he teamed up with harmonica player Billy Boy Arnold, drummer Clifton James, and bass player Roosevelt Jackson to record demos of “I'm A Man" and "Bo Diddley" with a backing ensemble comprised by Otis Spann (piano), Lester Davenport (harmonica), Frank Kirkland (drums), and Jerome Green (maracas). They then re-recorded the songs at Chess Studios. The record was released in March of 1955, the a-side, "Bo Diddley," becoming an R&B number-one hit.

The Bo Diddley beat and guitar

Bo Diddley is best known for the "Bo Diddley beat," a driving, rumba-like beat. Although the beat conjures feelings of Africa and the Caribbean, Diddley reportedly invented it while trying to play Gene Autry's "(I've Got Spurs That) Jingle, Jangle, Jingle." The beat is also thought to be related to the tradition of "hambone," in which persons slap their own knees, thighs, and torso to create a drum effect. Three years before the release of "Bo Diddley," a song that closely resembles it, "Hambone," was cut by Red Saunders' Orchestra with The Hambone Kids. Diddley and his band, however, achieved a powerful, almost overwhelming rhythmic tradition that is unmistakably his own creation.

Diddley's songs (for example, "Hey Bo Diddley" and "Who Do You Love?") often have no chord changes. In these cases, the musicians play the same chord throughout the piece, so that excitement is created by the rhythm, rather than by harmonic tension and release. In his recordings, Diddley used a variety of rhythms, from straight back beat to pop ballad style, frequently with maracas by Jerome Green. 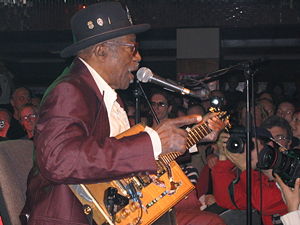 He was also an influential guitar player who invented many special effects and other innovations in tone and attack. Diddley's trademark instrument was the rectangular-bodied Gretsch guitar, nicknamed "The Twang Machine," a guitar that he developed himself around 1958 and wielded in thousands of concerts over the years. He later had other similar-shaped guitars custom-made for him by other manufacturers. He also played the violin, which is featured on his mournful instrumental "The Clock Strikes Twelve," a 12-bar blues.

Diddley's lyrics were often witty and humorous adaptations of folk music themes. The song "Bo Diddley" was based on the lullaby "Hush Little Baby." Likewise, "Hey Bo Diddley" is based on the folk song "Old Macdonald." The rap-style boasting of "Who Do You Love," a wordplay on "hoodoo," used many striking lyrics from the African-American tradition of toasts and boasts. His "Say Man" and "Say Man, Back Again" both share a strong connection to the insult game known as "the dozens." For example: "You got the nerve to call somebody ugly! Why you so ugly the stork that brought you into the world ought to be arrested!!!"

On November 20, 1955, Diddley appeared on The Ed Sullivan Show. He was reportedly asked to sing Tennessee Ernie Ford's hit "Sixteen Tons," but when he appeared on stage, he sang "Bo Diddley." This infuriated Sullivan. "I did two songs and he got mad," Bo Diddley later recalled. "Ed Sullivan said that I was one of the first colored boys to ever double-cross him. Said that I wouldn't last six months." He was banned from further appearances on the show.

Diddley had several additional hits through the late 1950s and the 1960s, including "Pretty Thing" (1956), "Say Man" (1959), and "You Can't Judge a Book By the Cover" (1962). He released a string of albums whose titles—including Bo Diddley Is a Gunslinger and Have Guitar, Will Travel—that bolstered his self-invented legend. Between 1958 and 1963, Checker Records released 11 full-length albums by Bo Diddley. Diddley was a breakthrough crossover artist with white audiences, appearing on the Alan Freed concerts and popular television shows. However, he rarely tailored his compositions or performances to teenage concerns. His live shows—unlike those of Chuck Berry, for example—were oriented toward adult black night clubs until his later career of playing oldies shows.

Elvis Presley's "His Latest Flame" was one of many rock hits which feature the Bo Diddley beat.

The Bo Diddley beat was used by many other artists in the 1950s and 1960s, notably Buddy Holly ("Not Fade Away"); Johnny Otis ("Willie and the Hand Jive"); Elvis Presley ("His Latest Flame"); Wayne Fontana & The Mindbenders ("The Game of Love"); Jefferson Airplane ("She Has Funny Cars"); George Michael ("Faith"); and others. The early The Rolling Stones sound featured several uses of the Bo-Diddley beat on songs such as "Not Fade Away" and "I Need You Baby (Mona)." Buddy Holly's own cover version of "Bo Diddley" provided him with a top-ten posthumous hit in the UK in 1963.

Didley's own songs were frequently covered. The Animals and Bob Seger both recorded "The Story of Bo Diddley." The Who and The Yardbirds covered "I'm a Man"; while Diddley's "Road Runner" was also frequently covered, including by The Who in concert. Both Eric Clapton and Creedence Clearwater Revival covered "Before You Accuse Me." Velvet Underground drummer Maureen Tucker counts Diddley as one of her chief influences and covered "Bo Diddley" on her solo album Life in Exile After Abdication.

In 1963, Diddley starred in a UK concert tour with the Everly Brothers and Little Richard. The Rolling Stones, still unknown at the time, were listed much lower on the same bill. Over the decades, his performances have ranged from sweaty Chicago clubs to rock-and-roll oldies tours. He appeared as an opening act for The Clash and as a guest of the Rolling Stones. On March 28, 1972, he played with Grateful Dead at the Academy of Music in New York City. This concert was released for the Grateful Dead's Dick's Picks live album series as Volume 30.

In addition to the many songs identified with him, he wrote the pioneering pop song "Love Is Strange" under a pseudonym for Mickey and Sylvia.

Bo Diddley was one of the first American musicians to have women in his band, including Peggy Jones (aka Lady Bo, b.1940), Norma-Jean Wofford (aka The Duchess, c.1942-2005), and Cornelia Redmond (aka Cookie). He also set up one of the first home recording studios.

Bo Diddley spent many years in New Mexico, not only as a musician, but also as a law officer, perhaps fulfilling the legendary declaration "Bo Diddley is a Gunslinger." He lived in Los Lunas from 1971 to 1978 while continuing his musical career and served for two and a half years as Deputy Sheriff in the Valencia County Citizens' Patrol. During that time he personally purchased and donated three highway-patrol pursuit cars. 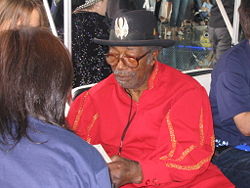 In 2005, Bo Diddley celebrated his fiftieth anniversary in music with successful tours of Australia and Europe, and with coast-to-coast shows across North America. He performed his song "Bo Diddley" with Eric Clapton and Robbie Robertson at the Rock and Roll Hall of Fame's twentieth annual induction ceremony and in the UK, Uncut magazine included his 1958 debut album "Bo Diddley" in its listing of the "100 Music, Movie & TV Moments That Have Changed The World."

In 2006, Diddley participated as the headliner of a grass-roots organized fund raiser concert, to benefit the town of Ocean Springs, Mississippi, which was devastated by Hurricane Katrina.

Later, he resided in Archer, Florida, a small farming town near Gainesville, Florida, where he attended a born-again Christian church with some of his children, grandchildren, and great-grandchildren.

Diddley died on June 2, 2008, at the age of 79 of heart failure at his home in Archer. Garry Mitchell, a grandson of the singer and one of more than 35 family members at the musician's home when he died, said his death was not unexpected. Mitchell reported that Diddley gave the thumbs up sign as the gospel song "Walk Around Heaven" was played at his deathbed and that his last words were that he was soon going to heaven himself.[2]

In his later years, Bo Diddley received numerous accolades in recognition of his role as one of the founding fathers of rock and roll. In 1987 he was inducted into the Rock and Roll Hall of Fame. His pioneering contribution to rockabilly through artists such as Buddy Holly and Elvis Presley has been recognized by the Rockabilly Hall of Fame. In 1996, he received a Lifetime Achievement Award from the Rhythm and Blues Foundation. The following year saw his 1955 recording of his song "Bo Diddley" inducted into the Grammy Hall of Fame as a recording of lasting qualitative or historical significance. He received a Grammy Lifetime Achievement Award in 1998. In 2002, he received a Pioneer in Entertainment Award from the National Association of Black Owned Broadcasters and a Broadcast Music Incorporated (BMI) Icon Award.

Bo Diddley's greatest legacy, however, is the driving beat he contributed to the rock genre, which will likely continue to be used and developed for generations to come.

Retrieved from https://www.newworldencyclopedia.org/p/index.php?title=Bo_Diddley&oldid=1064493
Categories:
Hidden category:
This page was last edited on 8 February 2022, at 15:04.
Content is available under Creative Commons Attribution/Share-Alike License; additional terms may apply. See Terms of Use for details.