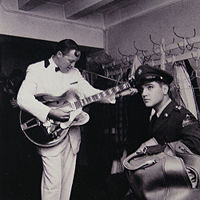 Bill Haley and Elvis Presley, shown here in Germany in the late 1950s, were two major rock stars who earlier recorded in the rockabilly genre.

Rockabilly is one of the earliest forms of rock and roll as a distinct style of music. It flourished in the mid 1950s based mainly in the American south, and several of its leading practitioners were among the most famous early rock and roll performers.

The classic rockabilly sound was "a brash, lively, unselfconscious hybrid of blues and country," characterized by a "slapping string bass, twanging lead guitar [and] acoustic rhythm guitar - with plenty of echo."[1]

While usually thought of as a white southern genre, rockabilly's blend of blues and country crossed racial boundaries. Elvis Presley's rockabilly music was popular on northern radio stations that catered to blacks, while white stations often refused to play his records on the grounds that it corrupted the youth. Chuck Berry, on the other hand, is an example of a black musician whose songs—though rarely characterized as rockabilly—often closely resembled it.

The center of classic rockabilly recordings was the Sun Records studios in Memphis, Tennessee. There, Sun owner Sam Phillips discovered such artists as Carl Perkins, Johnny Cash, Elvis Presley, and Jerry Lee Lewis. Other influential artists in the genre included Buddy Holly, Gene Vincent, Roy Orbison, and Conway Twitty. Many of these went on to have important careers in "mainstream" rock and roll. By the late 1950s, rockabilly had fused with rock and roll to such a degree that virtually died out as a distinct musical form. In recent years, various rockabilly revival groups have brought a renewed appreciation for the genre.

In the 1940s, several country acts began performing blues-influenced songs with driving rhythms that anticipated rockabilly. Bill Monroe's up-tempo numbers such as Heavy Traffic Ahead and Rocky Road Blues are examples. The Delmore Brothers recorded such songs as Hillbilly Boogie and Pan American Boogie in 1945. Hank Williams, adding drums and electric guitar, created such pre-rockabilly classics as Move It On Over, Honky-Tonkin' and Hey Good Lookin'. Several other country and swing artists recorded similar sounds.

In 1952, Bill Haley, released Rock the Joint, which some believe was very first true rockabilly recording, replete with slap bass and the hallmark country/blues sound. Tennessee Ernie Ford performed in a similar style on songs such as Smokey Mountain Boogie.

The Heyday of Rockabilly 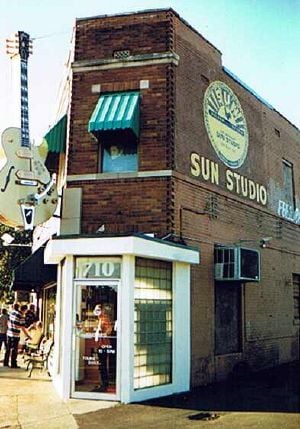 The Sun Records studio in Memphis

Elvis Presley's 1954 Memphis sessions for Sun Records produced some of the most influential rockabilly recordings. That's All Right Mama, first performed by Arthur Crudup, was a reworking of a blues tune, done with overtones of country music. Presley also recorded a rocking 4/4-time version of the bluegrass standard "Blue Moon of Kentucky," originally a waltz number by Bill Monroe. Elvis sang similar songs on the Louisiana Hayride radio show, where he was billed as The Hillbilly Cat, a title that embodies the rockabilly synthesis.

During roughly the same period of time, a young singer/songwriter in Lubbock, Texas named Buddy Holly was busy taking elements of various musical styles (blues, country, gospel, south of the border, etc.) and melding them into the sound that won him stardom. Holly's pioneering efforts are legendary, and the rockabilly sound was a strong element in much of his work.

Carl Perkins, who also recorded for Sun, is the performer whose recordings most clearly define the rockabilly genre. His "Blue Suede Shoes" is considered a classic of the style. The early recordings of Jerry Lee Lewis, Johnny Cash, Dale Hawkins, Charlie Feathers, Hasil Adkins, Gene Vincent, Billy Lee Riley, Johnny Burnette and Roy Orbison are also considered definitive. Early Everly Brothers hits such as Bye Bye Love and Wake Up Little Susie also featured the rockabilly sound. Eddie Cochran and Ricky Nelson, though not southerners, were also are considered rockabilly performers. As mentioned above, several of Chuck Berry's hits were nearly pure rockabilly in style. (See for example: Johnny B. Goode and Sometimes I Will and Again I Think I Won't.) Bill Flagg was the first to name the music rockabilly when he recorded for Tetra Records in 1955−1956. His song Go Cat Go made the National Billboard charts in 1956.

Rockabilly was a vehicle for many women performers to display their musical talents as well. Women like Wanda Jackson and Janis Martin performed a liberating form of rockabilly. Wanda Jackson was the first woman to shed her cowboy hat and boots and opt for rhinestone earrings and high heels when singing rockabilly music. She utilized Elvis' backing group The Jordanaires in her recordings.

Rockabilly's popularity waned in the early 1960s. The advent of The Beatles, however, brought a later generation into appreciation of such rockabilly classics as Honey Don't, Matchbook, and Everybody's Trying to Be My Baby when the "fab four" covered each of these Carl Perkins songs.

In 1977 Robert Gordon, accompanied by Link Wray on guitar, started a more conscious Rockabilly revival. His cover version of Billy Lee Riley's Red Hot got much radio airplay, and RCA released his album Rock Billy Boogie in 1979. Also in 1979, the popular operatic rock band Queen released Crazy Little Thing Called Love, a rockabilly song which became the number one for a time on the American charts of popular music. In the early 1980s, The Stray Cats had several hit records in the rockabilly style. Another noteworthy rockabilly band of the '80s was the Blasters. Other revivalists followed in the 1990s, including High Noon, Big Sandy and His Fly-Rite Boys, Lone Star Trio, Danny Dean & The Homewreckers, The Racketeers, and others. Bands such as The Cramps, Batmobile and The Meteors merged the rockabilly with punk rock, forming a distinct sub-genre referred to as psychobilly.

In 1997, the Rockabilly Hall of Fame was founded by Bob Timmers to present early rock and roll history and information relative to the artists and personalities involved in this pioneering American music genre.

Several rockabilly festivals take place each year in the United States and Europe. Attendance at these festivals ranges from a few hundred to several thousand. Since the late 1990s the most popular of these has been Viva Las Vegas, which takes place each Easter weekend in Las Vegas.

Retrieved from https://www.newworldencyclopedia.org/p/index.php?title=Rockabilly&oldid=1091606
Categories:
Hidden category:
This page was last edited on 16 December 2022, at 02:27.
Content is available under Creative Commons Attribution/Share-Alike License; additional terms may apply. See Terms of Use for details.