Raymond Edward "Eddie" Cochran (October 3, 1938 - April 17, 1960) was an American rock-and-roll musician and an important influence on popular music during the late 1950s and early 60s. Although his promising career was cut short by his death at age 21, Cochran left a memorable impression on rock history with compelling songs like "Summertime Blues."

Raised in Minnesota, Cochran moved with his family to California in the early 1950s. After learning to play blues guitar, he teamed up with fellow guitarist Hank Cochran (no relation), with whom he began recording in 1955 as the Cochran Brothers. The duet split up the next year, and Cochran began a song-writing career with Jerry Capeheart. He received an important break when he was asked to perform his song “Twenty Flight Rock” in the movie The Girl Can’t Help It, starring Jayne Mansfield. Soon after, Liberty Records signed him to a recording contract.

Cochran's first hit was “Sittin’ in the Balcony," reaching number 18 on the pop charts in 1957. The following year, his iconic anthem celebrating teenage boredom, “Summertime Blues,” made the Top 10 and became a rock and roll classic. Two additional hits, “C’mon Everybody” and “Somethin’ Else," established Cochran as a star, particularly in England.

Cochran was 21 when he died on April 17, 1960, in an auto accident en route to the London airport. Many of his songs were released posthumously, and "Summertime Blues" later made the record charts in cover versions by The Who and Blue Cheer, as well as being featured in the soundtracks of numerous films. In 1987, Cochran was inducted into the Rock and Roll Hall of Fame.

Cochran was raised in Albert Lea, Minnesota, as Ray Edward Cochran. He took music lessons in school but quit the school band to play drums. He also eschewed piano lessons and took up the guitar, playing the country music he heard on the radio. In the early 50s, Cochran's family moved to Bell Gardens, California. As his guitar playing improved, he formed a band with two friends from his junior high school.

During a show featuring many performers at an American Legion hall, Eddie met Hank Cochran (later a noted country-music songwriter). Although they were not related, they began performing together and recorded as the "Cochran Brothers." Eddie also worked as a session musician and began writing songs, making a demo record with Jerry Capehart, his future manager.

In 1956, Cochran was invited to appear in the musical-comedy film The Girl Can't Help It starring Jayne Mansfield and featuring performances of early rock and roll stars Gene Vincent and Little Richard, who sang the title sang. Cochran performed his song "Twenty Flight Rock," about the frustration of a young man in love with a girl who lives on the twentieth floor of a building with a broken elevator. In 1957, Cochran had a role in his second film, Untamed Youth and also had his first hit, "Sittin' in the Balcony," written by John D. Loudermilk.

Cochran followed this with what would become his most famous song, "Summertime Blues" co-written with Jerry Capehart. Released on Liberty Records, it charted number eight on August 25, 1958, after receiving massive air play throughout the summer. A light-hearted expression of teenage boredom, the concluding line of the song's final verse was a classic expression of naive political alienation: "I called my congressman and he said, quote: 'I'd like to help you son, but you're too young to vote.'" The song would play an important influence on the rock music of the late 50s, both lyrically and musically, and has since been widely covered and used in numerous movie soundtracks.

A highly talented guitarist, Cochran was an energetic stage performer as well as an early expert at studio overdubbing, whereby he was able to play and sing all the parts on several of his songs. Continually touring, Cochran was backed by the Kelly Four, including bassist Connie Smith, who was later replaced by Dave Schrieber; drummer Gene Ridgio; and a series of pianists and saxophonists. When playing with Hank Cochran, Eddie played a Gibson electric-acoustic guitar with a single florentine cutaway. Later, he moved to a 1956 Gretsch 6120 Chet Atkins Western model, which Eddie had modified, replacing the neck position De Armond Dynasonic pickup with a black covered Gibson P-90 pickup. He also used acoustic guitars.

Cochran's brief career included only a few more hits, such as "C'mon Everybody," "Somethin' Else," "My Way," "Weekend," "Nervous Breakdown," and his posthumous UK number-one hit "Three Steps to Heaven."

On Saturday, April 16, 1960, at about 11:50 p.m., while on tour in the United Kingdom, 21-year-old Cochran died in a traffic accident traveling through Chippenham, Wiltshire, England on the A4. Their taxi crashed into a lamppost on Rowden Hill, killing Cochran. A plaque now commemorates the event at the site. No other car was involved.

Cochran was taken to St. Martin's Hospital, Bath, but died at 4:10 p.m. the following day. Also injured in the crash were fellow rock performer Gene Vincent and Cochran’s fiancée, Sharon Sheeley, co-writer of “Somethin’ Else” and composer of Rick Nelson’s 1958 number-one hit, “Poor Little Fool.” The taxi driver, George Martin, was convicted of dangerous driving, fined £50, disqualified from driving for 15 years, and sent to prison for six months.

Eddie Cochran is interred in the Forest Lawn Memorial Park in Cypress, California. A posthumous album, My Way, was released in 1964.

One of the first rock artists to write his own songs and overdub tracks, Cochran had an innovative technique of aligning the bass and guitar to the same harmonic frequency, producing the much-imitated twangy guitar sound featured on "Summertime Blues." 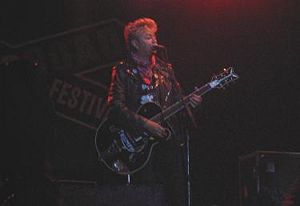 Artists such as The Who, The Beach Boys, Blue Cheer, Led Zeppelin, The White Stripes, The Sex Pistols, Rush, Tiger Army, Paul McCartney, and Alan Jackson have covered his songs. Glam-rock artist Marc Bolan had his main Les Paul model refinished in an transparent orange to resemble the Gretsch 6120 guitar played by Cochran, who was his music hero. Cochran was also a heavy influence on the nascent rockabilly guitar legend Brian Setzer from Stray Cats.

Cochran was a prolific performer in his short career, and the British Label Rockstar Records has released more of his music posthumously than had been released during his life. One of his posthumous releases was "Three Stars," a tribute to The Big Bopper and Eddie's friends Buddy Holly and Ritchie Valens, who had died together in a plane crash just one year earlier.

Cochran's pioneering contribution to the genre of rockabilly has also been recognized by the Rockabilly Hall of Fame. Several of his songs have been re-released since his death, such as "C'Mon Everybody," which was a number 14 hit in 1988 in the UK. He was inducted into the Rock and Roll Hall of Fame in 1987.

All released posthumously except Singing To My Baby: