Buddy Holly (September 7, 1936 – February 3, 1959), was the stage name of Charles Hardin Holley, an American singer, songwriter, and pioneer of early rock and roll. Although his career spanned only a few short years, Holly was a gifted songwriter and performer, and his remarkable innovation in the young genre was an enormous influence on the generations of rock musicians that would follow him. Such an influence helped to cultivate a personal maturity in his followers that rewarded self-evaluation and mastery of an artistic style.

Buddy Holly was born Charles Hardin Holley in Lubbock, Texas to Lawrence Odell Holley and Ella Pauline Drake, the youngest of four boys. The Holleys were a musical family and as a young boy, Holly learned to play the violin, piano, and steel guitar to varying degrees, before settling on the acoustic guitar. While attending Hutchinson Jr. High School, he met Bob Montgomery, with whom he shared a common interest in music. Forming bands with other young musicians in the area, they performed together at whatever local venues they could find, eventually earning their own Sunday night show on local radio station, KDAV, the first all-country radio station in the country.

Holly initially played fairly straightforward country music but incorporated more and more R&B elements into his music as time went on. He was already moving towards the synthesis of musical styles that would define early rock and roll when he attended an Elvis Presley concert in Lubbock in early 1955. By all accounts, the event made a huge impact on Holly who was taken with Elvis’ charisma and particularly with his energetic, exciting new sound.

By this point, Holly and Montgomery were being chosen by KDAV to open for the touring acts that came into town. Holly's transition to rock was finalized when he opened for Bill Haley & His Comets at a local rock show organized by Eddie Crandall, who was also the manager for Marty Robbins. As a result of this performance, Holly was offered a contract with Decca Records to work alone, which he accepted. According to Ellis Amburn (1995), his public name changed from "Holley" to "Holly" on February 8, 1956, when he signed the Decca contract (45).

In 1956, Holly recorded about a dozen tracks of country music for Decca in Nashville, backed by studio musicians. The music was, despite several quality tracks, generally uninspired, and an ill-fit for Holly, whose musical trajectory already lay outside of the confines of traditional country music. Unsurprisingly, the sessions and the singles that resulted from them were unsuccessful.

Undeterred, Holly returned to Lubbock to refocus his efforts. He formed his own backing band, "The Crickets," and began making records at the studio of musician and record producer Norman Petty in Clovis, New Mexico. Among the songs recorded there was a new version of "That'll Be the Day" (the song, whose title was inspired by a John Wayne line from The Searchers, was recorded before in Nashville). Perry became Holly’s producer and manager, signing him to Coral Records under Holly’s name. Perry had music industry contacts, and believing that "That'll Be the Day" would be a hit single, he contacted publishers and labels. Brunswick Records, ironically a subsidiary of Decca, signed The Crickets, and released “That’ll Be the Day” (in order to avoid potential trouble with Decca, which owned the rights to the song under Holly’s name).

“That’ll Be the Day” was released in June 1957, and after a slow start, became Buddy’s first major hit (reaching number 1 on the pop charts and number 2 on the R&B charts by September). To this day it is arguably his signature song. The song is undeniably rock and roll, highlighted by Holly’s always charismatic, hiccupping vocals, and an inspired instrumental performance that draws equally from country harmony and R&B strut (and even showcases a lively guitar solo from Holly).

Holly and the Crickets toured around the country throughout the second half of 1957 in support of their hit record. Meanwhile, several successful follow-up singles were released, including “Oh Boy” and “Peggy Sue.” The latter was particularly notable for its drumbeat, a continuous rumble played completely in “paradiddles” (a type of drum sticking pattern).

In early 1958, Holly went overseas, touring in Australia and the United Kingdom, where he was especially popular, and was to be enormously influential to a generation of budding musicians, John Lennon and Paul McCartney included. Back in the United States, he continued to have success releasing records both under his own name and with the Crickets, and stayed extremely busy touring and recording throughout the year.

The year 1958 was eventful for Holly’s personal life as well. During a June trip to visit his music publisher in New York, Holly met Maria Elena Santiago. He proposed the day he met her, and was married in August.

By this time Holly had become more familiar with the workings of the music industry. Suspicious of manager Norman Perry’s financial dealings, and determined to take more control over his business concerns, Holly split with Perry in November. The rest of the Crickets elected to retain Perry as their manager, leaving Holly to work solely as a solo act. He moved to Greenwich Village in New York City with Maria, and began preparations for the next phase of his career.

Holly’s musicianship and style had continued to develop at a remarkable rate through the end of 1958, perhaps ahead of the tastes of his listeners. His later singles weren’t selling as well as earlier hits, and though his break with Perry gave him additional creative freedom, it perhaps produced financial pressure as well.

As a way to generate some income in that transitional time, Holly formed a new backing group and committed to a three-week tour of the Midwest dubbed the “Winter Dance Party.” Accompanying him on the tour were young Latino rocker Ritchie Valens, disc jockey J. P. Richardson (better known as the Big Bopper), and doo-wop trio Dion and the Belmonts.

Holly and company had battled subzero temperatures and transportation problems for more than a week when they rolled into Clear Lake, Iowa on February 2 and played a show at the Surf Ballroom. Frustrated by issues with the tour bus, Holly chartered a small plane to fly him and his bandmates to the next venue shortly after the show. However, after a little prodding and a coin toss, bassist Waylon Jennings and guitarist Tommy Allsup surrendered their seats to Richardson and Valens. Less than five minutes after take off, no more than six miles northwest of Clear Lake, their plane crashed into a barren field, killing the pilot and all three passengers instantly. 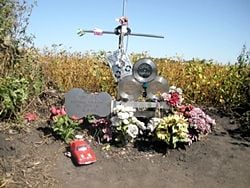 Buddy Holly spent no more than 21 months in the public eye, from the release of “That’ll Be the Day” to his death, yet the impact he had on rock and roll was tremendous, if more subtle than that of Elvis. Unlike virtually all other popular musicians of his time, Holly was deeply interested in every aspect of the recording process, from writing his own material, to experimenting with recording and production techniques.

Working with independent producer and studio-owner Norman Petty was crucial for Holly’s development. Musicians of Holly’s time had access to recording studios dictated by record label budgets, union restrictions, and other external factors. Holly and the Crickets, on the other hand, could spend countless hours in Petty’s studio recording at their whim, free to tweak, adjust, and experiment. They didn’t restrict themselves to a certain sound or a set of instruments, but pushed the boundaries of early rock, often playfully; for example, a celesta provides the main backing for the sweet pop song “Everyday.” With “Words of Love,” Holly and the Crickets were among the first to effectively employ double tracked vocals in a rock song. Several of Holly’s songs feature percussion played on a cardboard box. Before his death, Holly was delving into a diverse orchestral pop sound and more complex song structures, as “True Love Ways” displays. The relentless tumble underpinning “Peggy Sue” originated from a bet Buddy made that his drummer couldn’t maintain such a drumbeat for the whole song. The drummer did, and it became part of the song. This whimsical enthusiasm for the creative process is very much a part of Holly’s legacy.

Not only did he create quality music that holds up under scrutiny to this day, but he arguably set the paradigm of musical innovation and creative autonomy that would serve as the model for the generations of rock musicians that followed him. John Lennon and Paul McCartney have repeatedly affirmed their outright adulation for Holly, McCartney having even purchased the rights to Holly’s catalog of music.

Finally, Holly entered a new archetype into the rock and roll pantheon. Alongside the wanton sexuality of Elvis and the impeccable musicianship of Chuck Berry, he erected the prolific, inspired everyman, the guy next door. Holly didn’t possess matinee idol looks. More than any other early rock star, young fans could identify with Holly and his unassuming charm. They could see themselves doing what he did while Holly continued to write and perform his works with enthusiasm and effortless charisma.

Retrieved from https://www.newworldencyclopedia.org/p/index.php?title=Buddy_Holly&oldid=1065071
Categories:
Hidden category:
This page was last edited on 17 February 2022, at 19:17.
Content is available under Creative Commons Attribution/Share-Alike License; additional terms may apply. See Terms of Use for details.