John Wayne (May 26, 1907 – June 11, 1979), nicknamed "Duke," was an American film actor whose career began in silent movies in the 1920s. He was a major star from the 1940s to the 1970s. Wayne is most famous for his work in one of America's greatest native art forms, the Western movie. In more than 200 films made over 50 years, he also made a surprising variety of other kinds of films. Wayne epitomized a certain kind of rugged individualistic masculinity, and has become an enduring icon in American culture.

In the last decades of his career, Wayne transformed into an American folk figure. He had become a hero to some, while he was a villain to others, for his outspoken, politically conservative views. Although Wayne carefully avoided political roles for himself, he was a highly enthusiastic supporter of Richard M. Nixon, Barry Goldwater, Spiro T. Agnew, Ronald Reagan, and others who, he felt, represented the best ideals of Americanism and anti-Communism.

But for the vast throng of movie-going fans who idolized him on the big screen, Wayne as an icon of conservatism had little significance compared to Wayne as a movie star. Although he did not always play clean-cut "good guys," as other Western heroes such as Gene Autry did, he was a leader in casting the role of the Western hero who fought the conflict between good and evil on the Western Plains. Indeed, it was impossible to mention the word "Western" without thinking of "The Duke."

John Wayne was born Marion Robert Morrison in Winterset, Iowa in 1907, but the name became Marion Mitchell Morrison when his parents decided to name their next son Robert. However, in later life, Wayne often stated that his middle name was Michael. His family was Presbyterian; father Clyde Leonard Morrison was of Scottish descent and the son of a Civil War veteran, while mother Mary Alberta Brown was of Irish ancestry. Wayne's family moved to Glendale, California in 1911. It was his neighbors in Glendale who started calling him "Big Duke," because he never went anywhere without his Airedale terrier dog, who was named “Little Duke.” He preferred "Duke" to "Marion," and the name stuck for the rest of his life.[1]

John Wayne’s early life was marked by poverty. His father was a pharmacist, but did not manage money well. As a teen, Wayne worked in an ice cream shop for a person who shoed horses for local Hollywood studios. He was also active as a member of the Order of DeMolay, a youth organization associated with the Freemasons, that he joined when he came of age. He attended Wilson Middle School in Glendale. He played football for the 1924 champion Glendale High School team. Duke was a good student and popular, but had a bad reputation as a drinker. Tall from an early age, he played football for his high school in Glendale and was recruited by the University of Southern California (USC).

After nearly gaining admission to the U.S. Naval Academy, he instead attended the USC, where he was a member of the Sigma Chi Fraternity. Wayne also played on the USC football team under legendary coach Howard Jones, however his football career and scholarship ended because of an injury. 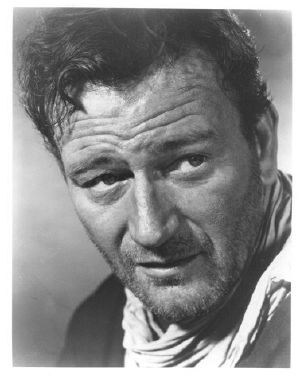 While at the university, Wayne began working around the local film studios. Western star Tom Mix got him a summer job in the prop department in exchange for football tickets, and Wayne soon moved on to bit parts in the late 1920s in films by director John Ford, with whom he established a longtime friendship. During the period from 1925 to 1929, Wayne appeared in nine silent films, including Brown of Harvard (1925), Great K&A Train Robbery (1926), The Drop Kick (1927), and Hangman's House (1928). Wayne's imposing presence and exaggerated mannerisms translated very effectively on the silent screen.

Wayne's first starring role, at the recommendation of Ford, was in the 1930 epic Western, The Big Trail. It was the director of that movie, Raoul Walsh, who gave him the stage name "John Wayne," after Revolutionary War general "Mad Anthony" Wayne. His pay was raised from $35.00 a week to $75.00 a week, and he was tutored by the studio's stunt men in riding and other Western skills.

During the next nine years, Wayne occupied himself in a number of B-Westerns and serials, such as Shadow of the Eagle and The Three Musketeers series, with occasional bit parts in larger productions such as Warner Brothers' Baby Face, starring Barbara Stanwyck. But it was in roles that brought out his manliness that was to make Wayne a huge star with men and women, alike.

Although appearing in many war films and frequently being eulogized as an "American hero," Wayne never served in the armed forces. However, his friend Bob Hope speculated that Wayne did more for the WWII war effort as an actor than he ever could on the battlefield. Between 1940, when the military draft was reinstated, and the end of World War II in 1945, he remained in Hollywood and made 21 movies. He was of draft age (34) at the time of the Pearl Harbor attack in 1941, but asked for and received a deferral for family dependency, a classification of 3-A. This was later changed to a deferment in the national interest, 2-A. 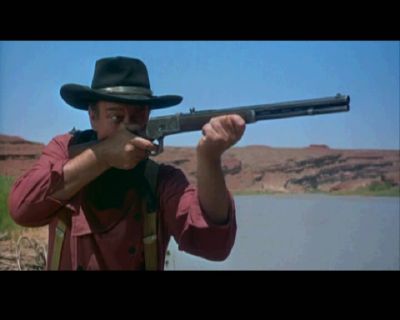 Wayne in The Searchers 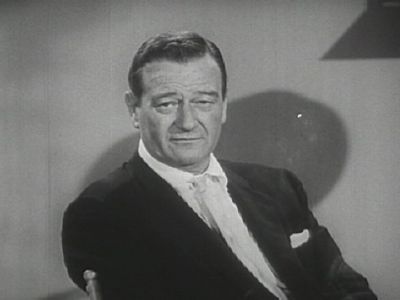 Wayne played the male lead in 142 of his film appearances, an as-yet, unsurpassed record. However, he also had a down-to-earth sense of humor that allowed him to appear in a pink bunny suit for an episode of Rowan and Martin's Laugh-In, as well as in comedy movies.

One of Wayne's best roles was ironically in one of the few films he made that was not a Western or war picture, The High and the Mighty, released in 1954. Directed by William Wellman and based on a novel by Ernest K. Gann, the movie featured Wayne as "Whistling" Dan Roman, the first officer of a DC-4 civilian flight that develops serious engine problems traveling from Hawaii to San Francisco. His portrayal of the heroic airman won widespread acclaim.

Despite his prolific output, John Wayne won only a single Best Actor Oscar, for the 1969 movie True Grit. He received a nomination for Best Actor in Sands of Iwo Jima, and another as the producer of Best Picture nominee The Alamo, which he also directed. In 1973, he released a best-selling spoken word album titled America, Why I Love Her, that was nominated for a Grammy.

Wayne was well known for his pro-American, conservative political views. In 1968, he directed The Green Berets, the only feature film of the time to openly support the Vietnam War. It was produced in close collaboration with the armed forces. It was also ironic that he appeared in an episode of the TV series Maude, created by ultra-liberal Norman Lear, and starred with the liberal actress Bea Arthur, who stood five feet, nine inches, and to whom Wayne referred to as "little lady." Wayne seemed to enjoy acting with actresses of a liberal bent, such as Lauren Bacall, Colleen Dewhurst, and Katharine Hepburn.

Wayne was married three times, always to Spanish-speaking Latina women: Josephine Alicia Saenz, Esperanza Baur, and Pilar Palette. Wayne had seven children from his marriages, the first two of which ended in divorce, and more than 15 grandchildren. All but one of his children went on to have minor Hollywood careers.

Although Wayne had not managed his money carefully earlier in his career, later in his life he invested successfully in a Panamanian shrimp business, among other ventures. He lived with his third wife, the Peruvian Pilar Palette Wayne, in an 11-room, seven-bathroom house in Newport Beach, California, where he had docked a 135-foot yacht. He also owned cattle ranches in Stanfield and Springerville, Arizona.

John Wayne died of stomach cancer on June 11, 1979, at the age of 72 at the UCLA Medical Center. He was interred in the Pacific View Memorial Park cemetery in Corona del Mar, Orange County, California. Some trace his cancer back to his work in The Conqueror, filmed about 100 miles downwind of Nevada nuclear-weapons test sites. However, it should also be noted that until 1964 Wayne was a chain smoker, which was more likely to have caused his cancer. Other actors who worked on that movie and later died of cancer were also heavy smokers, including Dick Powell, Agnes Moorehead, Pedro Armendariz, Susan Hayward, and John Hoyt.

Wayne converted to Roman Catholicism shortly before his death. At the time of his death, he resided in a bay front home in Newport Beach, California. His home remains a point of interest to tourists.

Easily imitated, with his signature swaggered walk and the use of the word "pilgrim," Wayne has been both honored and mocked with great frequency by other actors, comics, writers, and musicians.

The persona that Wayne often portrayed in his movies has become part of Americana. He set the cinematic standard for the steadfast, unflinching action hero, and many of his screen characterizations have taken on lives of their own. Wayne became an American icon: tough, rugged, taming the West, and saving democracy from fascism. His characters represented the spirit of the men who built the country.

John Wayne rose beyond the typical recognition for a famous actor to that of an enduring symbol who communicated American values and ideals. As his career progressed, he consciously selected roles that would not compromise his off-screen image. By the time of his last film, The Shootist (1976), Wayne refused to allow his character to shoot a man in the back, as was originally scripted. Wayne's status grew so large and legendary that when Japanese Emperor Hirohito visited the United States in 1975, he asked to meet John Wayne, the symbolic representation of his country's former enemy. 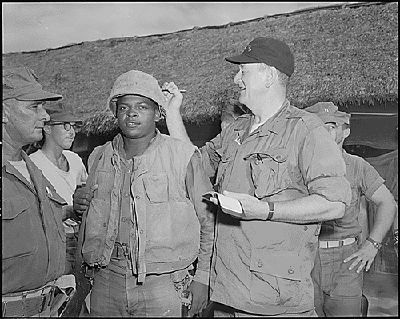 Wayne was a popular visitor to the war zones in World War II, the Korean War, and the Vietnam War. By the 1950s, in large part due to the military aspect of many of his films, Wayne had become an icon to all the branches of the U.S. military, despite his actual lack of military service. His name is attached unofficially to various pieces of military gear, such as the P-38 "John Wayne" can-opener, so named because "it can do anything." A paper towel unhappily used in place of "bathroom tissue" became known as "John Wayne toilet paper" because "it's rough and it's tough and don't take sh-t off no one." C-Ration crackers are called "John Wayne crackers" because presumably only someone as tough as Wayne could eat them.

In Los Angeles, a larger than life-sized bronze statue of Wayne was erected at the corner of La Cienega and Wilshire boulevards; and a second such monument was placed in Beverly Hills at the offices of the Great Western Savings and Loan Corporation, for whom Wayne had done a number of commercials. Wayne was inducted into the Hall of Great Western Performers of the National Cowboy and Western Heritage Museum in 1974.