James Francis Cagney, Jr. (July 17, 1899 – March 30, 1986) was an Academy Award-winning American film actor who won acclaim for a wide variety of roles and won the Oscar for Best Actor in 1942, for his role in Yankee Doodle Dandy.

Many of the roles that Cagney played plumbed the depth of human experience, explored the struggle between good and evil. He tended to play gangster roles, some of whom had a touch of decency despite their criminal personae. In can be said that Cagney left the world a better place for having lived and for having spent his life as an actor, dramatist, and interpreter of the human spirit. He dropped out of sight from the public for almost twenty years to escape the overexposure and hype of Hollywood. Cagney said that the secret to acting was simply this: "Learn your lines… plant your feet… look the other actor in the eye… say the words… mean them."

Cagney was born on the Lower East Side to James Cagney Sr., an Irish American bartender and amateur boxer, and Carolyn Nelson; his maternal grandfather was a Norwegian ship captain.[1] He had a reputation as a street fighter. Cagney associated with a rough crowd; most of whom ended in state prison and one was sent to the electric chair. Cagney did manage to graduate from Stuyvesant High School in New York City in 1918, and attended Columbia University.[2] On September 28, 1922, he married dancer Frances Willard Vernon with whom he remained for the rest of his life. They adopted a son, James Cagney Jr, and a daughter, Cathleen Cagney. Cagney began his acting career in vaudeville and on Broadway. When Warner Brothers acquired the film rights to the play Penny Arcade, they took Cagney and co-star Joan Blondell from the stage to the screen in the retitled Sinner's Holiday (1930), featuring Grant Withers. Cagney went on to star in many films, making his name as a "tough guy" in a series of crime films. 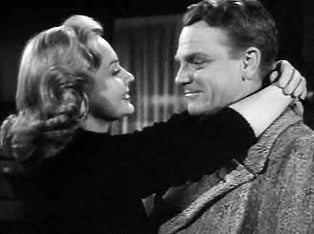 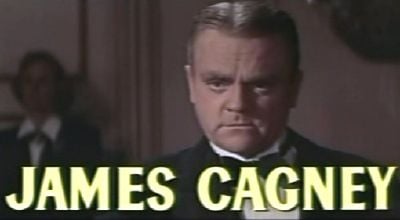 Although he claimed to be never further to the political left than "a strong FDR Democrat," Cagney lost the role of Notre Dame football coach Knute Rockne in Knute Rockne, All American to his friend Pat O'Brien because Cagney had signed a petition in support of the anti-clerical Spanish Republican government in the then-ongoing Spanish Civil War. The Notre Dame administration, which controlled all aspects of the filming, denied Cagney the role.[3] This was a major career disappointment for Cagney, who had hoped that playing the football legend would help break him out of gangster roles.

He won an Oscar playing George M. Cohan in Yankee Doodle Dandy (1942). He returned to his gangster roots in Raoul Walsh's film White Heat (1949) and then played a tyrannical ship captain opposite Jack Lemmon and Henry Fonda in Mister Roberts (1955).

Cagney's health deteriorated substantially after 1979. Cagney's final appearance in a feature film was in Ragtime (1981), capping a career that covered over 70 films, although his last film prior to Ragtime had occurred 20 years earlier with Billy Wilder's One, Two, Three (1961). During the long hiatus, Cagney rebuffed all film offers, including a substantial role in My Fair Lady as well as a blank check from Charles Bluhdorn at Gulf & Western to play Vito Corleone in The Godfather, to devote time to learning how to paint (at which he became very accomplished), and tending to his beloved farm in Stanford, New York. His roles in Ragtime and Terrible Joe Moran, a 1984 made-for-television movie, were designed to aid in his convalescence.

Cagney died at his Dutchess County farm in Stanfordville, New York, aged 86, of a heart attack. He is interred in the Cemetery of the Gate of Heaven in Hawthorne, New York. His pallbearers included boxer Floyd Patterson, Mikhail Baryshnikov (who had hoped to play Cagney on Broadway), actor Ralph Bellamy, and director Miloš Forman.

He was one of the founders of the Screen Actors Guild and its president from 1942 to 1944. In 1974, he received the Lifetime Achievement Award of the American Film Institute. He received the Kennedy Center Honors in 1980, and in 1984, his friend Ronald Reagan awarded him the Presidential Medal of Freedom. In 1999, the American Film Institute ranked Cagney eighth among the Greatest Male Stars of All Time.

Cagney's lines in White Heat (“Made it, Ma! Top of the world!”) were voted the 18th greatest movie quote by the American Film Institute.

As acting techniques became increasingly systematic (as in the case of "Method acting"), Cagney was asked during the filming of Mister Roberts about his approach to acting. As Jack Lemmon related in the television special, "James Cagney: Top of the World," which aired on July 5, 1992, Cagney said that the secret to acting was simply this: "Learn your lines… plant your feet… look the other actor in the eye… say the words… mean them."

In the 1981 television documentary, James Cagney: That Yankee Doodle Dandy[4] Cagney spoke of his well-known penchant for sarcasm, remarking in an on screen interview, "Sex with another man? Real good!"

In his AFI speech, Cagney said that film producer Jack Warner had dubbed him "the professional againster."

Stanley Kubrick often stated that Cagney was among his favorite actors.[5]