The term charisma originates from the Greek word χάρισμα meaning "gift" or "divine favor" and most often refers to a rare trait found in certain human personalities which can include extreme charm, a "magnetic" quality of personality and/or appearance, and an innate and powerfully sophisticated personal ability to communicate and persuade. It refers especially to a quality in certain people, both women and men, who easily draw the attention and admiration, or in negative cases hatred, of others due to an alluring quality of personality.

Charismatic leaders are those whose charismatic qualities inspires others to follow them. Whether such leadership has beneficial results or not depends on other aspects of the leader, namely whether their motivation is self-centered or for the good of all, whether they have the ability to develop effective strategies to accomplish their goals, and whether the content of their message and goals enhances or reduces the quality of life of members of the society. 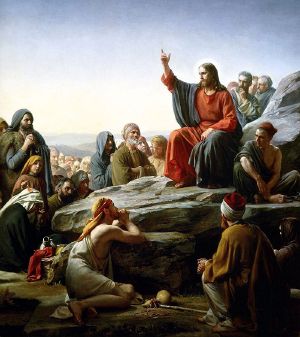 Jesus is considered by many to be an example of a charismatic authority.

Charismatic individuals generally project unusual confidence, serenity, assertiveness, authenticity, and focus, along with superb communication skills. Other similar terms or phrases related to charisma can include: grace, exuberance, equanimity, mystique, positive energy, "right stuff," joie de vivre, charm, personal magnetism, personal appeal, "electricity," and allure. Many of these qualities must be present within an individual in order for the person to be considered "charismatic" by the public and their peers.

To the early Greeks, charisma was said to be a "gift of grace," implying that this "divine quality" was an inborn trait. Today, many believe charisma can be taught or even learned, despite a persistent inability to accurately define or even fully understand the complex term. In many individuals, the use of charisma can lead to the development of a charismatic authority which may allow the individual to influence and lead others.

The study, recognition, and development of charisma in individuals is of particular interest to sociologists, psychologists, popular politicians, public speakers, and entertainers. In recent years the study of charisma has also reached areas of the business community and other areas involving leadership studies or leadership development.

Charisma has also been defined as a "set of behaviors or traits"; for example, a modern psychological approach posits that charisma is basically aggregative, a conglomeration of distinct personality traits that meld well in certain individuals to form the broad quality known as charisma. Theatrically, charisma is prevalent on-stage and in films, and can be encapsulated in verbal and non-verbal communication.

Charismatic authority is defined as the "power legitimized on the basis of a leader's exceptional personal qualities or the demonstration of extraordinary insight and accomplishment, which inspire loyalty and obedience from followers." [1]. As such, it rests almost entirely on the leader; the absence of that leader for any reason can lead to the authority's power dissolving. However, due to its idiosyncratic nature and lack of formal organization, charismatic authority depends strongly on the perceived legitimacy of the authority figure. For instance, a charismatic leader in a religious context might promote an unchallenged belief that he or she has been touched by God, in the sense of a guru or prophet. Should the strength of this belief fade, the power of the charismatic leader may also fade, which is one of the ways in which this form of authority shows itself to be unstable.

In contrast to the popular use of the term, "charismatic leader," German sociologist Max Weber saw charismatic authority not so much attributed to the character traits of the charismatic leader but as developing out of a relationship between the leader and followers. Weber believed the validity of charisma to be founded on its recognition by certain followers. He believed this recognition to be based not on the grounds of legitimacy, but on a sense of duty belonging to certain followers who believe they are especially chosen to recognize and confirm the exceptional qualities of their leader.

According to Weber, a charismatic leader is not solely of a positive force. Many sociologists argue that both Winston Churchill and Adolf Hitler could exemplify the characteristics of charismatic leaders. Furthermore, society often remains neutral towards both positive and negative forms of charismatic domination. French sociologist Pierre Bourdieu supported many of Weber’s claims, and further stressed a leader to have charisma only if other people "accept" that he or she may have it. Bourdieu argued that charisma usually depends on an "inaugural act," such as a decisive battle or moving speech after which the person will be regarded as a charismatic leader.

Politically, charismatic rule can be found in various authoritarian states, autocracies, dictatorships, and theocracies. In many circumstances when the leader of such a state dies or leaves office and a new charismatic leader does not appear, such a regime is more likely to fall. As in the example of Islam, a religion which evolves its own priesthood and establishes a set of laws and rules is most likely to lose its charismatic character and eventually move toward a second type of authority upon the removal of that leader.

The Study of Charismatic Leadership

According to psychologist Richard Wiseman,[2] a charismatic person has three attributes:

In regards to religious charisma, George D. Chryssides has asserted that not all new religious movements have charismatic leaders, and that there are differences in the hegemonic styles among those movements that do. However Eileen Barker has claimed that in many new religious movements there is often employed a founder or leader who wields charismatic authority and is believed to have some special powers or knowledge. Barker asserts that almost by definition, charismatic leaders are unpredictable, for they are not bound to tradition or rules. In many circumstances, Barker asserts a warning when a leader who lacks accountability requires from their following an unquestioned obedience, and subsequently encourages a growing dependency upon the movement for all material, spiritual, and social resources.

Australian psychologist Len Oakes, who authored a dissertation regarding prophetic charisma, invited eleven charismatic leaders to complete a psychometric test, which he labeled the "adjective checklist." Though Oakes found the group “quite ordinary,” the findings of his study led him to argue that the majority of charismatic leaders exhibit traits of narcissism, display an extraordinary amount of energy, and an inner clarity unhindered by the anxieties and guilt that afflict most people.

The following is a small sample of people whose leadership has been characterized, according to listed sources, as based on charismatic authority according to the sociological concept defined by Max Weber as "resting on devotion to the exceptional sanctity, heroism or exemplary character of an individual person, and of the normative patterns or order revealed or ordained by him.[3]"

Retrieved from https://www.newworldencyclopedia.org/p/index.php?title=Charisma&oldid=1095383
Categories:
Hidden category:
This page was last edited on 13 January 2023, at 02:09.
Content is available under Creative Commons Attribution/Share-Alike License; additional terms may apply. See Terms of Use for details.