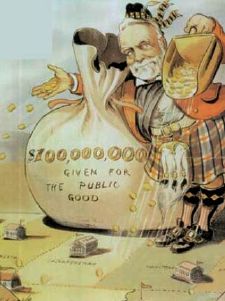 A charitable organization (also known as a charity) is a trust, company, or unincorporated association established for charitable purposes only. The law favors charities because they promote goodwill and lessen the government's burdens. They are therefore ordinarily exempt from paying income or property taxes. Charities are usually non-profit organizations.

A charitable organization is designed to benefit society or a specific group of people within that society. Its purpose may be educational, humanitarian, or religious. A charity goes beyond giving relief to the poor or homeless, extending to the promotion of happiness and the support of many worthy causes that are for the betterment of society as a whole. It is an example of encouraging people to live for the sake of others.

In law, the concept of "charitable" purpose has a technical meaning which is not quite the same as the way that the word is used in normal language. There is no statutory definition of a charitable organization, but case law in England and Wales has identified four principal charitable purposes,[1] namely trust for:

Thus, a charity as a group designed to benefit society or a specific group of people, may have educational, humanitarian, or religious purposes. A charity goes beyond giving relief to the indigent, extending to the promotion of happiness and the support of many worthy causes.[1]

Charities are generally exempt from paying income or property taxes, since they lessen the government's burdens. To qualify for such tax exemptions, though, charities must be non-profit organizations.

Charitable work was a part of western civilization long before it was nationalized. Charity has been a virtue recognized and fostered by religion throughout human history, and has been an integral part of European civilization. In medieval Europe, the Church bore the responsibility for organizing and promoting poor relief and it was not until the sixteenth century that the state began to take over this responsibility.

In England, the first statutory measures to alleviate poverty were enacted in the late Tudor period. Relief, however, was directed not at the population at large but at the poor and disabled and the method employed was to place responsibility on the parishes which were helped by a poor rate. During this period, there was a surge of private charity and a resentment of state paternalism.[2]

The Charitable Uses Act of 1601 listed a number of purposes to be enforced and protected by law, purposes that by virtue of precedent can be still be relevant in charity case law today.[3] United Kingdom charity law has evolved through the courts by degrees of similarity or deviation from the spirit of the 1601 Act. As a result, where no precedent can be established by reference to other case law, the Charitable Uses Act can still act as the ultimate test of a proposed charity's purposes. However, this course of action is now highly unlikely.

The commissioners appointed by the 1601 Act were the first to oversee, investigate, and enforce charitable trusts in Britain. However, after a promising start the commissioner's potency fell away and by the end of the seventeenth century they were a defunct body.

The next significant development in legislation affecting charity in Britain came in 1736 when the Mortmain Act was introduced to protect the rights of heirs and frustrate benefactors determined to disinherit their families. The Mortmain Act invalidated charitable gifts of land or buildings unless they were made in the last year of the donor's life.[4]

The Christian ethic as interpreted by the Puritan middle class called for dedication to work, honesty, thrift, and charity. It was fundamentally opposed to the corruption and paternalism associated with the institutionalized church and state. Until the twentieth century, welfare continued to be characterized by its focus on the genuinely poor or disadvantaged, the localized system of distribution and the emphasis on private duty to help one's fellow man. These duties were expanded upon as the twentieth century progressed, and private charities were formed to benefit different causes and sympathies.[2]

Today, charitable organizations exist for a broad spectrum of specific purposes, all within the overarching commitment to benefit, ameliorate, or uplift humankind mentally, morally, or physically. Organizations to prevent cruelty to animals, to erect a monument in honor of a famous historical figure, or to beautify a designated location are examples of charitable purposes intended to foster kindness to animals, patriotism, and community well-being, respectively. The relief of poverty, the improvement of government, and the advancement of religion, education, and health are further examples of common reasons for the establishment of a charitable organization.

Under Australian law, there is no centralized system of government regulation or recognition for charities. The notion of a charity touches upon several distinct areas of the law; it is up to each individual agency to decide on what is a charity with respect to the laws it is administering. If an entity disagrees with the decision of the agency, it can challenge it through the Courts. It is possible for an entity to be recognized as a charity by some agencies but not others. For example, in the early 1980s, Scientology was recognized as a religious charity by the governments of most States and Territories, but the Victorian taxation system refused recognition, until Scientology successfully challenged that decision through the courts.

The most important of the laws around charities is the registration with the Australian Taxation Office as deductible gift recipients (DGR). This results in the people being able to deduct donations to the charity from their income tax. However, there are also several other areas where charity comes into play: the States regulate charitable fundraising, to ensure only bona fide charities engage in it; ASIC charges reduced fees for companies established for a charitable purpose; charities can avail themselves of exceptions to the company naming provisions under the Corporations Act; trusts for charitable purposes can escape the rule against perpetuities in trust law.

The definition of trust in Australia is derived through English common law, originally from the Statute of Charitable Uses Act 1601, and then through several centuries of case law based upon it. In 2002, the Federal Government established an inquiry into the definition of a charity. That inquiry proposed that the government should legislate a definition of a charity, based on the principles developed through case law. This resulted in the Charities Bill 2003. The Bill incorporated a number of provisions, such as limitations on charities being involved in political campaigning, which many charities saw as an unwelcome departure from the case law. The government then appointed a Board of the Taxation inquiry to consult with charities on the Bill. As a result of widespread criticism from charities, the Government decided to abandon the Bill.

As a result, the government then introduced what became the Extension of Charitable Purpose Act 2004. This Bill did not attempt to codify the definition of a charitable purpose; it merely sought to clarify that certain purposes were indeed charitable, whose charitable status had been subject to legal doubts. These purposes were: childcare; self-help groups; and closed/contemplative religious orders.[5]

In the United States, there are complex tax law differences between private and public charities.

Donations to charities in the United States are deductible for income tax purposes if the organization has exempt status from the Internal Revenue Service, usually under non-profit organization sec. 501(c)(3) of the tax code. Such organizations file a tax return by using IRS Form 990, which is monitored by watchdog groups like Charity Navigator to analyze their business practices. Any organization meeting the rules of section 501(c)(3) can be classified a charity in the U.S., including trusts, foundations, and corporations.[6]

US tax law also allows trusts that do not qualify as exempt under 501(c)(3) to get significant tax advantages if they are set up with specific provisions.[7] These are called Charitable Remainder Trusts (CRT) and Charitable Lead Trusts (CLT). Charitable Remainder Trusts are so named because the remainder of the assets in the trust passes to a designated charity at the death of the grantor or one or more beneficiaries. A current tax deduction is given for the portion that is determined to be the expected amount the charity will receive in the future, which is called the remainder. During the lifetime of the primary beneficiary, a percentage of assets or a fixed dollar amount are paid to the primary beneficiary.

There are two primary types of CRTs: Charitable Remainder Unitrusts (CRUT), where a percentage of assets is received by the lifetime beneficiary, and Charitable Remainder Annuity Trusts (CRAT), where a fixed dollar amount is received every year. Charities or other trustees are also allowed to set up pooled trusts that operate similarly to individual CRTs except that they receive contributions from multiple donors. This allows each donor similar benefits as an individual CRT without the expense of creating the trust themselves. The Charitable Lead Trust is essentially the reverse of a Charitable Remainder Trust. In this form, the lifetime payments go to the charity and the remainder returns to the donor or to the donor's estate or other beneficiaries. Thus, the two types of CLTs are CLUTs and CLATs, which are analogous to CRUTs and CRATs.

There were over 200,000 registered charities in the UK at the start of 2005. Over one hundred ninety thousand charities in England and Wales are generally registered with the Charity Commission for England and Wales. The Charity Commission has an online register listing them all. Many charities take the form of limited liability companies and these are also registered with Companies House. Major changes to English charity law are contained in the Charities Act 2006.[8]

In the United Kingdom, Gift Aid is a scheme to enable tax-effective giving by individuals and companies to UK charities. In outline, Gift Aid allows individuals who are subject to UK income tax to complete a simple, short declaration that they are a UK taxpayer. Any cash donations that the taxpayer makes to the charity are then treated as being made after deduction of income tax at the basic rate (22 percent in 2006-2007), and the charity can reclaim the basic rate income tax paid on the gift, adding approximately 28 percent to the value of the gift. Higher-rate taxpayers can also claim a deduction for income tax purposes. Charitable companies are also exempt from paying corporation tax on any profits they make. Charities also gain more favorable treatment for value added tax purposes as well. For example, donated materials for charity shops are classed as zero-rated for VAT purposes and advertisements placed by charities are also zero-rated in many circumstances.

Although strictly intended for cash donations, charities can also claim tax relief on goods donated (such as via charity shops) for sale.[9]