Chester Burton "Chet" Atkins (June 20, 1924 – June 30, 2001) was an influential guitarist and Nashville record producer. His picking style, inspired by Merle Travis, Django Reinhardt, and Les Paul, brought him admirers both within and outside the country scene, both in the U.S.A. and internationally.

Atkins' style of finger-picking opened new creative possibilities and remains highly influential among guitarists today. His willingness to branch into jazz, classical guitar, and flamenco created an inter-cultural bridge that brought his music to a wide audience and increased his influence. Atkins recorded more than 100 albums and was the recipient of numerous awards, including the Grammy Lifetime Achievement Award.

Chet Atkins was born on June 20, 1924, in Luttrell, Tennessee, near the Clinch Mountains, youngest of three boys and a girl. His parents divorced when he was six and he was raised by his mother. His first instrument was a ukulele and then a fiddle, and then when he was nine he acquired a guitar from his brother Lowell in exchange for an old pistol and some of his brother's chores. Due to a near-fatal asthma condition, Atkins was a sensitive youth who made music his main focus. A self-taught musician, he became an accomplished guitarist while he was in high school.

While living with his father in Georgia, Atkins heard Merle Travis playing over WLW radio. This early influence dramatically shaped Atkins' finger-picking style. Both used the right thumb to play the bass notes and the index finger to play melodies. However, Atkins used two other fingers of the right hand as well, resulting in a greater degree of complexity and flexibility of style.

After dropping out of high school in 1942, Atkins landed a job at WNOX radio in Knoxville. There he played fiddle and guitar with singer Bill Carlisle and comic Archie Campbell as well as becoming a member of the station's "Dixieland Swingsters," a swing instrumental combo.

After three years, he moved to WLW in Cincinnati, Ohio, where Merle Travis had formerly worked. Six months later, he moved to Raleigh, North Carolina and worked with singing duo Johnnie and Jack before heading for Richmond, Virginia, where he performed with Sunshine Sue Workman. Atkins' shy personality worked against him, as did the fact that his sophisticated style led many to doubt he was truly "country." He was fired several times, but with his unique playing ability soon found other work.

Traveling to Chicago, Atkins auditioned and joined the band of Red Foley, who was leaving his star position at the WLS National Barn Dance to join the Grand Ole Opry. Atkins made his first appearance at the Opry in 1946 as a member of Foley's band. He also recorded an instrumental single for Nashville-based Bullet Records that year. That single, "Guitar Blues," was progressive by country standards, including a clarinet solo by Nashville dance band musician Dutch McMillan. Atkins landed a solo spot on the Opry for a while, but when that was cut he moved on to KWTO in Springfield, Missouri, where once again he was fired for not sounding country enough.

While working with a Western band in Denver, Colorado, Atkins came to the attention of RCA Victor. He made his first RCA solo recordings in Chicago in 1947, but they did not sell well. He also did some studio work for RCA and relocated to Knoxville again, where he worked with Homer and Jethro on WNOX's new Saturday night radio show the Tennessee Barn Dance. In 1949, he joined Mother Maybelle and the Carter Sisters back at KWTO. The group soon moved to Nashville in mid-1950, where Atkins began working on recording sessions and performed again on WSM and the Grand Ole Opry.

While he had not yet had a hit record, Atkins' stature was growing, and he began organizing RCA Nashville sessions. Atkins' first hit single was an instrumental version of "Mr. Sandman," followed by the Christmas song "Silver Bell"(s) which he did as a duet with Hank Snow. His albums also became more popular. In addition to recording, Atkins became a design consultant for Gretsch, who manufactured a popular Chet Atkins line of electric guitars from 1955-1980. Atkins also became manager of RCA's Nashville studio, eventually inspiring the creation of the legendary Studio B. This was the first studio built specifically for the purpose of recording on the now famous Music Row.

Atkins took charge of RCA's Nashville division in 1957. With country music record sales suffering as a result of the success of rock and roll, Atkins and Bob Ferguson took their cue from Patsy Cline's producer, Owen Bradley, and eliminated fiddles and steel guitar as a way of making country singers appeal to pop fans. This became known as the Nashville Sound. Atkins used Elvis Presley's vocal backing group, the Jordanaires, and a pop-oriented rhythm section on hits like Jim Reeves' "Four Walls" and "He'll Have to Go;" and Don Gibson's "Oh Lonesome Me" and "Blue Blue Day." As a result, the once rare phenomenon of having a country hit "cross over" to the pop charts became more common.

Atkins also made his own records, which usually visited pop standards and jazz, in a sophisticated home studio, often recording the rhythm tracks at RCA but adding his solo parts at home. Guitarists of all styles came to admire various Atkins albums for their unique musical ideas and in some cases experimental electronic ideas. In this period he became known internationally as "Mister Guitar," also the name of one of Atkins's albums. Atkins performed by invitation at the White House for presidents Kennedy through George H. W. Bush.

Atkins's own biggest hit single came in 1965, with "Yakety Axe," an adaptation of his friend saxophonist Boots Randolph's "Yakety Sax." 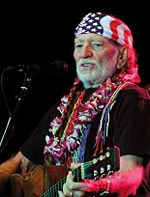 Now vice president of RCA's country division, Atkins brought Waylon Jennings, Willie Nelson, Connie Smith, Bobby Bare, Dolly Parton, Jerry Reed, and John Hartford to the label in the 1960s. He took a considerable risk during the mid-1960s by signing country music's first African-American singer Charley Pride. Ironically, some of Pride's biggest fans were among the most conservative country fans, many of whom did not care for the pop stylings Atkins had added.

Meanwhile, Atkins' slick Nashville Sound and his corporate management style—insisting that performers adhere to his vision of what would work commercially whether they liked it or not—did not sit well with talents like Nelson and Jennings. In the late 1960s, they would relocate to Austin, Texas and form their brand of "Outlaw country," proving that there was still a major market for "authentic" country music devoid of compromise with the pop market.

In 1969, Atkins had his last major hit single, "Country Gentleman."

In the 1970s, Atkins became increasingly stressed by his executive duties. He produced fewer records but could still turn out hits such as Perry Como's pop hit "And I Love You So." He recorded extensively with close friend and fellow picker Jerry Reed. A 1973 bout of colon cancer, however, led Atkins to redefine his role at RCA, to allow others to handle administration while he went back to his first love, the guitar, often recording with Reed or even Homer & Jethro's Jethro Burns (Atkins's brother-in-law) after Homer died in 1971. However, he continued to want to express himself outside of the country genre. In 1972, he recorded an album with the Boston Pops orchestra and continued to experiment with other forms of guitar music.

By the end of the 1970s, Atkins's time had passed as a producer, and RCA sensed that its country division needed to move closer to its country roots. He first retired from his position as an RCA executive, and then began to feel stifled as an artist because RCA objected to his branching out into jazz. At the same time he grew dissatisfied and began designing guitars with Gibson. He left RCA in 1982 and signed with Columbia Records, for whom he produced a debut album in 1983.

While he was with Columbia, he showed his creativity and taste in jazz guitar, and in various other contexts. He was a masterful improviser but could also read music well, and even performed some classical guitar pieces with taste and distinction. Asked to name the ten most influential guitarists of the twentieth century, he named Django Reinhardt to the first position on the list, and placed himself at fifth position.

In later years, he sometimes went back to performing on radio, appearing on Garrison Keillor's Prairie Home Companion, and even picking up a fiddle from time to time. While he did more performing in the 1990s, his health grew frail from worsening colon cancer. He died on June 30, 2001 at his home in Nashville.

Atkins received numerous awards, including eleven Grammy Awards (including a Lifetime Achievement Award in 1993), and nine Country Music Association Instrumentalist of the Year awards. Billboard Magazine awarded him their Century Award, their "highest honor for distinguished creative achievement," in December 1997.

A virtuoso instrumentalist, Atkins expanded the universe for guitarists—and lovers of guitar music—in a way no one did before. For better or worse, he was the driving force behind the creation of the Nashville Sound, which helped revive the fortunes of country music even as it removed some of the authentic southern folk qualities which many fans and artists craved.

Of his own legacy he once said, "Years from now, after I'm gone, someone will listen to what I've done and know I was here. They may not know or care who I was, but they'll hear my guitars speaking for me."

In 2002, Atkins was posthumously inducted into the Rock and Roll Hall Fame. The following year, Atkins ranked #28 in CMT's 40 Greatest Men of Country Music. A stretch of Interstate 185 in southwest Georgia (between LaGrange and Columbus) is named "Chet Atkins Parkway."

Retrieved from https://www.newworldencyclopedia.org/p/index.php?title=Chet_Atkins&oldid=1003206
Categories:
Hidden category:
This page was last edited on 9 February 2017, at 19:44.
Content is available under Creative Commons Attribution/Share-Alike License; additional terms may apply. See Terms of Use for details.