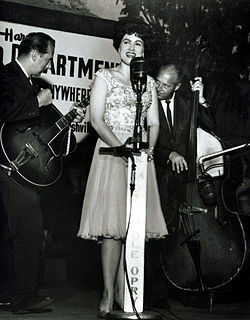 Patsy Cline (Sept. 8, 1932—March 5, 1963) was a country music singer who enjoyed pop music cross-over success during the era of the Nashville Sound in the early 1960s. She is considered one of the most influential female vocalists of the twentieth century.

Cline was best known for her full throated, emotionally expressive voice, which differentiated her from other female country singers of her day. Many of her songs have been identified as classics. Her signature songs include "Crazy," "I Fall to Pieces," "She's Got You," "Sweet Dreams," and "Walkin' After Midnight." Millions of her albums have been sold since her death in a 1963 plane crash at the age of 30 during the height of her fame, which has given her an iconic fan status.

Born Virginia Patterson Hensley on September 8, 1932, in Winchester, Virginia, Patsy Cline was the daughter of Sam and Hilda Hensley, a blacksmith and a seamstress, respectively. She was the eldest of three children. With dreams of stardom since an early age, Cline often proclaimed that she would one day be famous. She often sang in church with her mother and admired film stars such as Judy Garland and Shirley Temple. A serious illness as a child caused a throat infection which, according to Cline, resulted in her booming, husky voice. She was well-rounded in her musical tastes and credited a range of singers from Kay Starr to Hank Williams for influencing her.

Cline performed in area variety/talent shows as a girl. As she grew older, she began to play popular nightclubs. To support her family after her father abandoned them, she quit school and worked various jobs, sodajerking and waitressing by day and singing in clubs at night. 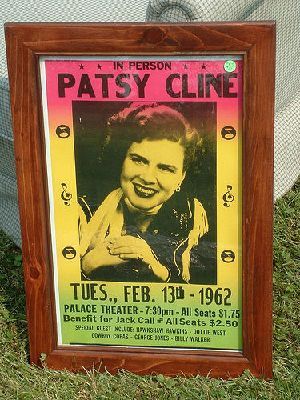 Poster shows Patsy Cline in one of her cowgirl outfits.

Her mother, a gifted seamstress who practiced her craft until her passing in 1998, made Cline's famous western stage outfits. During this period in her early 20s, she met two men who would be responsible for her name changes: she married contractor Gerald Cline in 1953 (whom she later divorced), and she was given the name "Patsy" by her manager, Bill Peer. Numerous appearances on local radio followed, and she attracted a large following in the Virginia/Maryland area. She became a regular on Connie B. Gay's Town and Country television show, broadcast from Washington, D.C.

In 1955, Cline was signed to Four Star Records, but her contract greatly limited her material, stating that she could record only compositions written by Four Star writers. Her first record for Four Star was "A Church A Courtroom And Then Good-Bye." The song attracted little attention, although it did lead to several appearances on the Grand Ole Opry. During her contract with Four Star, Cline recorded 51 songs.

The year, 1957, was a year of great change in Cline's life. Not only did she marry the man she called the love of her life, Charlie Dick, but she skyrocketed to fame when she appeared on the nationally televised Arthur Godfrey's Talent Scouts program. She sang a pop tune, "Walkin' After Midnight," and won. The song became an instant hit, reaching number two on the country charts and number 12 on the pop charts. She was unable to follow up "Walkin' After Midnight," however, largely because her contract continued to limit the material she could record.

When her Four Star contract expired in 1960, Cline signed with Decca Records, under the direction of legendary producer Owen Bradley, who was not only responsible for much of Cline's career, but also for those of singers Brenda Lee and Loretta Lynn. Bradley's arrangements incorporated instruments not typically used on country records, such as strings. This new, more sophisticated instrumental style became known as “The Nashville Sound," also associated with RCA’s Chet Atkins, who produced Jim Reeves, Skeeter Davis and Eddy Arnold. 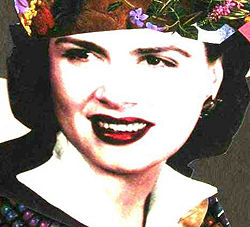 Cline's first Decca release was the 1961 ballad "I Fall to Pieces." It went on to become Cline's first number one hit on the country charts and peaked at number 12 on the pop charts. The song cemented Cline's status as a household name and proved that female country singers could enjoy just as much crossover success as male counterparts such as Jim Reeves and Eddy Arnold. That same year, she was elected as an official member of the Grand Ole Opry, the realization of a lifelong dream.

Patsy dethroned Kitty Wells as the "Queen of Country Music" when, for two years in a row in 1961 and 1962, she won Billboard Magazine's "Favorite Female Country & Western Artist" title. Cline's husky, full-throated, "citified" sound was a marked contrast to Wells' pure country vocals. Cline, however, did not think of herself as anything other than a country singer.

During this period, Patsy befriended and encouraged several women just starting out in country music, including Loretta Lynn, Dottie West, Barbara Mandrell, Jan Howard and Brenda Lee, all of whom cite her as an influence in their careers.

The year 1961 also brought the birth of Cline's son Randy. However, on June 14, Patsy and her brother were involved in a head-on car collision. The impact of the accident threw Patsy through the windshield, nearly killing her. Upon her arrival at the scene, singer Dottie West picked the glass from Patsy's hair, while Patsy insisted that the other car's driver be treated before her.

Patsy later stated that she saw the female driver of the other car die before her eyes at the hospital. Suffering from a jagged cut across her forehead that required stitches, a broken wrist, and a dislocated hip, she spent a month in the hospital. When she left the hospital, her forehead was still visibly scarred. For the remainder of her career, she wore wigs to hide the scars and headbands to relieve pressure on her forehead. She returned to the road on crutches.

Height of her career

One of Patsy's stage dresses

Owing to her determination, outspoken nature, strong will, and self-confidence, Cline was the first female in the country music industry to surpass her male competitors in terms of record sales and concert tickets. She headlined Carnegie Hall with fellow Opry members, played the Hollywood Bowl with Johnny Cash, and eventually had her own show in Las Vegas in 1962. She also reinvented her style by shedding her Western cowgirl outfits for elegant sequined gowns, cocktail dresses, and spiked heels. Cline's style in fashion and music were mocked at first by her critics, but quickly copied.

After the success of "I Fall to Pieces"—which reached number one on the country charts in 1961 and also hit number six in the pop field—Cline needed a follow-up, particularly because her car accident had required that she spend a month in the hospital, which meant lost time from touring and promotions. It came in the form of her most remembered song, written by Willie Nelson, and called, simply, "Crazy." Cline reportedly hated the song at first, with its understated, jazz-like quality, lacking in opportunity for her to let loose her vocal power. However, when it was finally recorded, it became a classic and—although it topped out at number two country and number nine pop—the song for which she remains best known.

In 1962 Cline released her next single, the Hank Cochran composition "She's Got You," which hit number one on the country charts and became another crossover hit. In 1962, she had a string of minor hits, including "Imagine That," "When I Get Thru' With You," and "So Wrong." These were followed by an appearance on the teen rock television show American Bandstand and the release of an album, her third, called Sentimentally Yours.

In the months leading up to her death, Cline confided in her closest friends, June Carter and Dottie West, that she felt a sense of impending doom and suspected that she was not going to live much longer. On March 3, 1963, she gave her last concert at a benefit show in Kansas City, Missouri for the family of a disc jockey who had recently died. On the bill with her were George Jones, Billy Walker, Dottie West, Cowboy Copas, Hawkshaw Hawkins, and Wilma Lee & Stoney Cooper. Afterward, Patsy boarded a private plane bound for Nashville, flown by her manager Randy Hughes, along with Cowboy Copas and Hawkshaw Hawkins. After stopping to refuel in Dyersburg, Tennessee, the plane flew into severe weather and crashed at 6:20 p.m. in a forest just outside of Camden, Tennessee, 90 miles from Nashville. There were no survivors. Nashville was in shock over the loss, and Cline's memorial service was attended by thousands.

Three Patsy Cline songs became hits after her 's death: "Sweet Dreams," "Leavin' On Your Mind," and "Faded Love." She was buried in her hometown of Winchester, Virginia where a bell tower erected in her memory plays hymns daily at 6:00 p.m., the hour of her death. Her mother had her grave marked with a simple bronze plaque, which reads: "Death Cannot Kill What Never Dies: Love."

During her short career of only five and a half years, Patsy Cline was awarded 12 prestigious awards for her achievements in music and three more following her death. Most of these were Cashbox, Music Reporter, and Billboard Awards, which were considered high honors during her time.

As the 1960s and early 1970s moved on, MCA (new owner of Decca) continued to issue Patsy Cline albums, so that Cline has had several posthumous hits. Her Greatest Hits album continues to appear on the country charts. 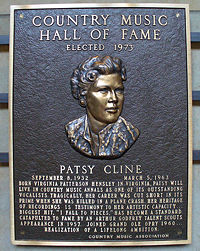 Studio albums released during her lifetime: