Patriots' Day (so punctuated in several U.S. states, but Patriot's Day in Maine) is an annual event, formalized as several state holidays, commemorating the Battles of Lexington and Concord, and the Battle of Menotomy, the first battles of the American Revolutionary War.

The day is observed by re-enactments of the battles and the famous rides of Paul Revere and William Dawes, as well as sporting events including the Boston Marathon and a Red Sox baseball game at their home ballpark, Fenway Park, in Boston.

The holiday was originally celebrated on April 19, the actual anniversary of the battles (fought in 1775). Since 1969, it has been observed on the third Monday in April in Massachusetts[2] and in Maine[3] (which until the Missouri Compromise of 1820 was part of Massachusetts). The Monday holiday creates a three-day long weekend.

The day is a public school observance day in Wisconsin.[4] Florida law also encourages people to celebrate it, though it is not treated as a public holiday.[5] On April 16, 2018 Connecticut became the fourth state to recognize the holiday, Governor Dannel Malloy having signed a bill establishing the unpaid state holiday in 2017.[6] On April 15, 2019, North Dakota became the first Western state to adopt Patriots' Day as a holiday.[1] 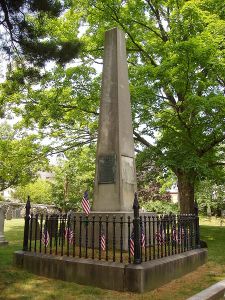 Patriots' Day was first proclaimed in Massachusetts in 1894 by Governor Greenhalge, replacing Fast Day as a public holiday.[7] The idea was introduced to the Governor by the statesman from Lowell, Isaac Henry Paige. It was established on April 19, commemorating the date of the Battles of Lexington and Concord and the larger Battle of Menotomy in 1775, and consolidating the longstanding municipal observances of Lexington Day and Concord Day. It is likely that the battles that took place in Menotomy (now Arlington), where 25 militia men died and 40 British soldiers were killed,[8] are not as well known as the smaller battles in Lexington and Concord because the town has had several names since that day in 1775. In 1938, the Massachusetts legislature passed a bill establishing the holiday "in commemoration of the opening events of the War of the Revolution."[9]

Maine followed Massachusetts in 1907 and replaced its Fast Day with Patriot's Day.[7]

On April 15, 2019, North Dakota became the fourth state, and first Western state, to adopt Patriots' Day as a holiday.[1]

Fast Day was a holiday observed in some parts of the United States between 1670 and 1991. The earliest known Fast Day proclamation was in Boston on September 8, 1670, while New Hampshire held their first Fast Day in early 1680. "A day of public fasting and prayer," it was traditionally observed in the New England states, having its origin in days of prayer and repentance proclaimed in the early days of the British American colonies by Royal Governors, to avoid such calamities as plagues, natural disasters, or crop failures. Fast Days were commonly held before the spring planting, and observance included church attendance, fasting, and abstinence from secular activities.[10]

Fast Day had lost its significance as a religious holiday by the late nineteenth century. It was abolished by Massachusetts in 1894. The Lexington Historical Society petitioned the Massachusetts State Legislature to proclaim April 19 as "Lexington Day." Concord countered with "Concord Day." However the biggest battle fought on this day was in the town of Menotomy, now Arlington, Massachusetts. Governor Frederic T. Greenhalge opted for a compromise, replacing the state's Fast Day, celebrated on the third Monday in April, with Patriots' Day. [8]

Maine, which also celebrated Fast Day on the third Monday in April, changed it to Patriot's Day (note different punctuation) in 1907.[7] Fast Day continued in New Hampshire until 1991, with the late April holiday signifying only the opening of the summer tourist season; the state dropped Fast Day in 1991, replacing it with the January Civil Rights Day, which they renamed Martin Luther King, Jr. Day (the last U.S. state to do so) in 1999.[10]

Battles of Lexington and Concord

The Battles of Lexington and Concord were the first military engagements of the American Revolutionary War. They were fought on April 19, 1775, in Middlesex County, Province of Massachusetts Bay, within the towns of Lexington, Concord, Lincoln, Menotomy (present-day Arlington), and Cambridge, near Boston. The battles marked the outbreak of open armed conflict between the Kingdom of Great Britain and its thirteen colonies in the mainland of British North America.

Several hundred British Army regulars, under Lieutenant Colonel Francis Smith, were ordered to capture and destroy military supplies that were reportedly stored by the Massachusetts militia at Concord. The Patriot colonists had received intelligence weeks before the expedition which warned of an impending British search, and had moved most of the supplies to safety. They had also received details about British plans on the night before the battle, and information was rapidly supplied to the militia.

The first shots were fired at sunrise Lexington. The militia were outnumbered and fell back. Other British colonists, hours later at the North Bridge in Concord, fought and defeated three companies of the British troops. The outnumbered soldiers of the British Army fell back from the Minutemen after a pitched battle in open territory.

More Minutemen arrived soon thereafter and inflicted heavy damage on the British regulars as they marched back towards Boston. The occupation of surrounding areas by the Massachusetts Militia that evening marked the beginning of the Siege of Boston.

The battles, particularly the skirmish at the North Bridge, are known as the "shot heard 'round the world," described in Ralph Waldo Emerson's Concord Hymn. 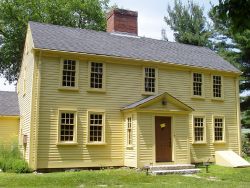 The Jason Russell House in Menotomy

The village of Menotomy (now Arlington) was on the Concord Road between Lexington and Concord and Boston. While the fighting was going on in Lexington and Concord, 5,100 militia men arrived in Menotomy from Middlesex and Essex Counties.[11][8] These men took up positions along the road the British troops would take on their retreat to Boston.[11] They placed themselves in and around houses, stone walls, fields, and barns. The bloodiest fighting of the first day of the American Revolution took place inside a single house, the Jason Russell House, in Menotomy.[11] Eleven militia men died in this house fighting British troops trained in bayonet fighting.[8] 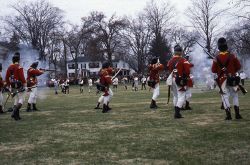 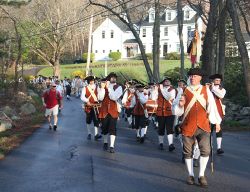 The National Lancers re-enact the rides of Paul Revere and William Dawes, beginning Sunday night with a service at the Old North Church. On Monday morning Revere leaves from the North End, Boston, and Dawes leaves from John Elliot Square in Roxbury, warning the people while on their way to Lexington.[13]

The most significant celebration of Patriots' Day is the Boston Marathon. The race links the Athenian and American struggles for liberty.[9]

The Boston Marathon is run on Patriots' Day every year, since its inception on April 19, 1897, even during the World War years.[9] Therefore, sometimes the holiday is referred to as "Marathon Monday."[14] However, due to the COVID-19 pandemic, the 2020 Boston Marathon was initially rescheduled to September,[15] and ultimately canceled.[16]

The Boston Red Sox baseball team have been scheduled to play at home in Fenway Park on Patriots' Day every year since 1959. The game was postponed due to weather in 1959, 1961, 1965, 1967, 1984, and 2018, and was canceled in 1995 because of the baseball strike. The game was played in 2013 despite the Boston Marathon bombing because it had finished before the bombs went off. From 1968 to 2006 the games started early, in the morning, around 11:00 am. The early start to these games usually resulted in the game ending just as the marathon was heading through Kenmore Square. However, since 2007 the marathon was started between 9:30 am and 10:00 am, resulting in the racers going through Kenmore in the middle of the Red Sox game.[17]

Retrieved from https://www.newworldencyclopedia.org/p/index.php?title=Patriots%27_Day&oldid=1088351
Categories:
Hidden category:
This page was last edited on 21 November 2022, at 16:46.
Content is available under Creative Commons Attribution/Share-Alike License; additional terms may apply. See Terms of Use for details.