King was the chief spokesperson for nonviolent activism in the Civil Rights Movement, which successfully protested racial discrimination in federal and state law. The campaign for a federal holiday in King's honor began soon after his assassination in 1968. President Ronald Reagan signed the holiday into law in 1983, and it was first observed three years later. At first, some states resisted observing the holiday as such, giving it alternative names or combining it with other holidays. It was officially observed in all 50 states for the first time in 2000.

While it is a paid holiday for workers, the emphasis is not on relaxing, celebrating, or being entertained. Rather, everyone is encouraged to participate in volunteer service activities to create a better community for all.

The Rev. Dr. Martin Luther King, Jr. (January 15, 1929–April 4, 1968) was America's foremost civil rights leader and is deemed by many as the greatest American leader of the twentieth century. His leadership was fundamental to ending legal segregation in the United States and empowering the African-American community. A moral leader foremost, he espoused non-violent resistance as the means to bring about political change, emphasizing that spiritual principles guided by love can triumph over politics driven by hate and fear. He was a superb orator, best known for his "I Have a Dream" speech given at the March on Washington on August 28, 1963. King became the youngest person to win the Nobel Peace Prize in 1964.

In 1968, at age 39, King was killed by an assassin's bullet. His impact and legacy was not limited to the U.S., but was worldwide, including influencing the struggle against apartheid in South Africa. Martin Luther King, Jr. is one of only three Americans to have a national holiday in their honor, and the only African-American. 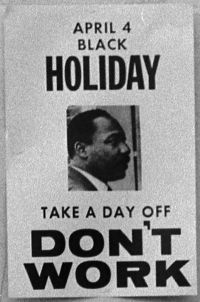 Sign (1969) promoting a holiday on the anniversary of King's death 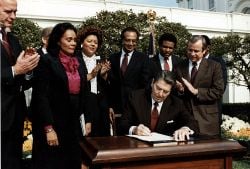 The idea of Martin Luther King Jr. Day as a holiday was promoted by labor unions in contract negotiations.[1] After King's death, U.S. Representative John Conyers (a Democrat from Michigan) and U.S. Senator Edward Brooke (a Republican from Massachusetts) introduced a bill in Congress to make King's birthday a national holiday. The bill first came to a vote in the U.S. House of Representatives in 1979. However, it fell five votes short of the number needed for passage.[2] Two of the main arguments mentioned by opponents were that a paid holiday for federal employees would be too expensive and that a holiday to honor a private citizen would be contrary to longstanding tradition (King had never held public office).[2] Only two other figures have national holidays in the U.S. honoring them: George Washington and Christopher Columbus.

Soon after, the King Center turned to support from the corporate community and the general public. The success of this strategy was cemented when musician Stevie Wonder released the single "Happy Birthday" to popularize the campaign in 1980 and hosted the Rally for Peace Press Conference in 1981. Six million signatures were collected for a petition to Congress to pass the law, termed by a 2006 article in The Nation as "the largest petition in favor of an issue in U.S. history."[1]

Senators Jesse Helms and John Porter East (both North Carolina Republicans) led the opposition to the holiday and questioned whether King was important enough to receive such an honor. Helms criticized King's opposition to the Vietnam War and accused him of espousing "action-oriented Marxism."[3] Helms led a filibuster against the bill and on October 3, 1983, submitted a 300-page document to the Senate alleging that King had associations with communists. Democratic New York Senator Daniel Patrick Moynihan declared the document a "packet of filth," threw it on the Senate floor and stomped on it.[4]

President Ronald Reagan originally opposed the holiday, citing cost concerns. When asked to comment on Helms' accusations that King was a communist, the president said "We'll know in thirty-five years, won't we?" referring to the eventual release of FBI surveillance tapes that had previously been sealed.[5] Finally, the bill introduced by Representative Katie Hall of Indiana to create a federal holiday honoring King passed the Senate by a count of 78 to 22[6] and the House of Representatives by 338 to 90, veto-proof margins.[3] On November 2, 1983, Reagan signed the bill.[7] The holiday was observed for the first time on January 20, 1986. It is observed on the third Monday of January.[8]

The bill also established the Martin Luther King Jr. Federal Holiday Commission to oversee observance of the holiday, and Coretta Scott King, King's wife, was made a member of this commission for life by President George H. W. Bush in May 1989.[9]

Although the federal holiday honoring King was signed into law in 1983 and took effect three years later, not every U.S. state chose to observe the holiday at the state level.

In 1986, Arizona Governor Bruce Babbitt, a Democrat, created a paid state MLK holiday in Arizona by executive order just before he left office. However, in 1987, his Republican successor Evan Mecham, citing an attorney general's opinion that Babbitt's order was illegal, reversed Babbitt's decision days after taking office.[10] Later that year, Mecham proclaimed the third Sunday in January to be "Martin Luther King Jr./Civil Rights Day" in Arizona, albeit as an unpaid holiday.[11] In 1990 and again in 1992, Arizona voters were given the opportunity to vote on giving state employees a paid MLK holiday. Due to the 1990 referendum proposing two different dates, the proposal failed. In the 1992 referendum, the voters, this time given only one option for a paid King Day, approved state-level recognition of the holiday.[12]

On May 2, 2000, South Carolina governor Jim Hodges signed a bill to make King's birthday an official state holiday. South Carolina was the last state to recognize the day as a paid holiday for all state employees. Before the bill, employees could choose between celebrating Martin Luther King Jr. Day or one of three Confederate holidays.[15]

MLK Day is observed on the third Monday in January as “a day on, not a day off.” [16] It is designated as a national day of service to encourage volunteering to improve the community.

The observance is most popular among nonprofit organizations and least popular among factories and manufacturers.[17] The reasons for this have varied, ranging from the recent addition of the holiday to its occurrence just two weeks after the week between Christmas and New Year's Day, when many businesses are closed for part or all of it.

Many schools and places of higher education are closed for classes; others remain open but may hold seminars or celebrations of King's message. The observance of MLK Day has led to some colleges and universities extending their winter break to include the day as part of the break. 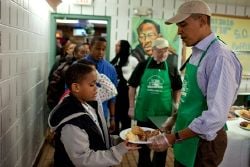 The national Martin Luther King Day of Service[18] was started by former Pennsylvania U.S. Senator Harris Wofford and Atlanta Congressman John Lewis, who co-authored the King Holiday and Service Act. The federal legislation challenges Americans to transform the King Holiday into a day of citizen action volunteer service in honor of King. The federal legislation was signed into law by President Bill Clinton on August 23, 1994. The annual Greater Philadelphia King Day of Service, begun in 1996 with 1,000 volunteers has become one of the largest events in the nation honoring King, with some 150,000 volunteers serving in over 1,800 projects. [19]

Several universities and organizations around the U.S., such as Arizona State University, Greater DC Cares, and City Year, participate in the Martin Luther King Jr. Day of Service. In honor of MLK, hundreds of Volunteer Centers, and volunteers across the country donate their time to make a difference on this day.

Outside the United States

In the Netherlands, a Martin Luther King, Jr. Tribute Dinner has been held almost every year by Americans living overseas since President Ronald Reagan signed the holiday into law in 1983. Dr. King had visited the Netherlands in 1964 to take part in the Congress of European Baptists.[21]

By coincidence, in Japan the coming of age for young people is traditionally celebrated on January 15, Martin Luther King, Jr.'s birthday. At the U.S. Conference of Mayors' Luncheon in commemoration of Dr. Martin Luther King, Jr. in 2005, the mayor of Hiroshima noted in his speech that on that day he always reminded the young people about the civil rights movement in the US, to unify his city's call for peace with King's message of human rights through non-violent social change.[22]

Retrieved from https://www.newworldencyclopedia.org/p/index.php?title=Martin_Luther_King,_Jr._Day&oldid=1086170
Categories:
Hidden category:
This page was last edited on 7 November 2022, at 15:35.
Content is available under Creative Commons Attribution/Share-Alike License; additional terms may apply. See Terms of Use for details.