Father's Day is a celebration inaugurated in the early twentieth century to complement Mother's Day. It celebrates fatherhood and male parenting, and honors and commemorate fathers and forefathers. Father's Day is celebrated on a variety of dates worldwide and typically involves gift-giving, special dinners for fathers, and family-oriented activities.

Like Mother's Day, Father's Day was initially celebrated in a religious fashion. In the Catholic tradition, it is connected with the principal feast day of Saint Joseph, spouse of the Virgin Mary, and thus having a paternal role in the earthly family of Jesus. Today, however, it has suffered from commercialization and much of the focus has become external and material. Still, the advertising of consumer items does create awareness of the day, reminding all of the importance of fathers and strengthening the bond between fathers and their children.

Although normal English punctuation guidelines indicate that the holiday should be spelled "Fathers' Day" (as it is a plural possessive), common usage dictates that the ostensibly singular possessive "Father's Day" is the preferred spelling.

In the United States, the first modern Father's Day church-service celebration was held on July 5, 1908, in Fairmont, West Virginia, at Williams Memorial Methodist Episcopal Church South, now known as Central United Methodist Church.[1][2] Grace Golden Clayton, inspired to celebrate fathers after the deadly mine explosion in nearby Monongah several months earlier, is believed to have suggested the service to the pastor. The explosion had killed 361 men, many of them fathers and recent immigrants to the United States from Italy. Another possible inspiration for the service was Mother's Day, which had begun to be celebrated in Grafton, West Virginia, a town about 15 miles away.

Another driving force behind the establishment of the integration of Father's Day was Sonora Smart Dodd, born in Creston, Washington. Her father, Civil War veteran William Jackson Smart, reared his six children in Spokane, Washington as a single parent. Dodd was inspired by Anna Jarvis' efforts to establish Mother's Day. Although she initially suggested the date of June 5, her father's birthday, she did not provide the organizers with enough time to make arrangements, and the celebration was deferred to the third Sunday of June. The first June Father's Day was celebrated on June 19, 1910, in Spokane, Washington, at the Spokane YMCA.[3]

Unofficial support from such figures as William Jennings Bryan was immediate and widespread. President Woodrow Wilson was personally feted by his family in 1916. President Calvin Coolidge recommended it as a national holiday in 1924. In 1966, President Lyndon Johnson made Father's Day a holiday to be celebrated on the third Sunday of June. The holiday was officially recognized in 1972, during the presidency of Richard Nixon.

In recent years, retailers have adapted to the holiday by promoting male-oriented gifts such as electronics, tools, as well as greeting cards. Schools and other children's programs commonly have activities to make Father's Day gifts.

By the beginning of the twenty-first century, Americans spent at least several billion dollars on gifts for Father's Day. Per capita spending on Father's Day was $28.97 in 2007, and significantly less than what was spent on Mother's Day, which is more steeped in traditional gifts, some of which tend to be more expensive than Father's Day gifts.[4] 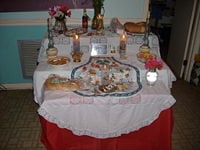 Many countries from all around the world, including Canada and the United Kingdom, celebrate Father's Day on the third Sunday in June, as in the United States. People celebrate the occasion by honoring their father and presenting popular gifts like greeting cards, flowers, candy, and neckties. Father's Day has been greatly commercialized in England with aggressive advertising campaigns to encourage buying gifts and cards. Although there is much criticism of over-commercialization, others suggest that such marketing does have positive impact by creating awareness of the day and thus strengthening the bond between fathers and their children.[5]

Father's Day in Argentina is celebrated on the third Sunday of June, but there have been several attempts to change it to August 24 to honor the day when the "Father of the Nation," José de San Martín, became a father.[7] In 1982, the Provincial Governor passed a law declaring Father's Day in Mendoza Province be celebrated on August 24.[8]

In 2004, several proposals to change the national date to August 24 were presented to the Argentinian Camara de Diputados.[8] However, the proposal was never approved by the Senate.[9]

In Austria Father's Day (Vatertag) was first observed in 1956. Although similar to the American holiday, it is not exactly the same. The date is also in June (on the second Sunday), but the celebration is more religious in character, in the nature of a Catholic feast day.[10] Even more so than in the United States, Father's Day is of much less significance than Mother's Day (Muttertag). 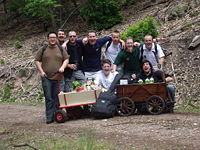 In Germany, Father's Day (Vatertag), while similar in name has an entirely different origin and meaning from the American tradition.[10] Vatertag is always celebrated on Ascension Day (the Thursday 40 days after Easter), which is a federal holiday. It began as a religious procession, honoring Gott, den Vater (God the Father). It then became a family-oriented day, honoring fathers, but later became a men's day in which celebration involved the consumption of much alcohol.

It became tradition to do a males-only hiking tour with one or more smaller wagons, Bollerwagen, pulled by manpower. In the wagons are wine or beer (according to region) and traditional regional food, Hausmannskost, which could be Saumagen, Liverwurst, Blutwurst (Blood Sausage), vegetables, eggs, and so on. Regionally, the holiday may be called "men's day," Männertag, or "gentlemen's day," Herrentag. Indeed, such celebrations reflect little of the role of men as parents, rather their desire to spend time together with male peers without the responsibility of a family.

In Taiwan, Father's Day is not an official holiday, but is widely observed on August 8, the eighth day of the eighth month of the year. In Mandarin Chinese, the pronunciation of the number 8 is bā. This pronunciation is very similar to the character "爸" "bà," which means "papa" or "father." The Taiwanese, therefore, usually call August 8 by its nickname, "Bābā Day" (爸爸節).

In Thailand, Father's Day is set as the birthday of the king. Thus, Father's Day has been celebrated on December 5, the birthday of king Bhumibol Adulyadej (Rama IX). Thai people wear a yellow cloth, which is the king's color. Young male celebrants present the flower of Father's Day, Canna (Dok put ta ruk sa), to their father, grandfather, or parents in the hope that they can become a man.