Kwanzaa is a week-long annual celebration held in the United States and other nations of the African diaspora to honor African heritage in African-American culture. It is observed from December 26 to January 1, culminating in gift-giving and a feast. In English, the proper greeting is "Joyous Kwanzaa."

Kwanzaa was created by Maulana Karenga and was first celebrated in 1966–1967. The celebration has seven core principles (Nguzo Saba), representing African values which particularly focus on community and working together to create a society of beauty and prosperity shared by all. 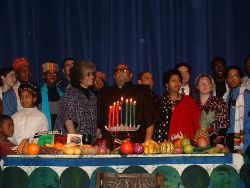 A 2003 Kwanzaa celebration with Kwanzaa founder Maulana Karenga at center, and others.

American Black Power activist and secular humanist Maulana Karenga, also known as Ronald McKinley Everett, created Kwanzaa in 1966, as a specifically African-American holiday.[1] Kwanzaa was established to help African Americans reconnect with their African cultural and historical heritage by uniting in meditation and study of African traditions and Nguzo Saba, the "seven principles of African Heritage," which Karenga said "is a communitarian African philosophy."[2] For Karenga, the creation of such a holiday also underscored the essential premise: "you must have a cultural revolution before the violent revolution. The cultural revolution gives identity, purpose and direction."[3]

The name Kwanzaa derives from the Swahili phrase matunda ya kwanza, meaning "first fruits of the harvest."[4] A more conventional translation would simply be "first fruits."

The choice of Swahili, an East African language, reflects its status as a symbol of Pan-Africanism, especially in the 1960s, although most of the Atlantic slave trade that brought African people to America originated in West Africa.[5][6]

First fruits festivals exist in Southern Africa, celebrated in December/January with the southern solstice, and Karenga was partly inspired by an account he read of the Zulu festival Umkhosi Wokweshwama. It was decided to spell the holiday's name with an additional "a" so that it would have a symbolic seven letters.[3]

During the early years of Kwanzaa, Karenga said it was meant to be an alternative to Christmas. He believed Jesus was psychotic and Christianity was a "White" religion that Black people should shun.[7] As Kwanzaa gained mainstream adherents, Karenga altered his position so practicing Christians would not be alienated: "Kwanzaa was not created to give people an alternative to their own religion or religious holiday."[2] Many African Americans who celebrate Kwanzaa do so in addition to observing Christmas.[8] 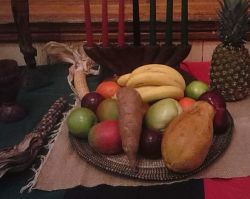 A display of Kwanzaa symbols with fruit and vegetables

Each of the seven days of Kwanzaa is dedicated to one of the following principles:[2]

Kwanzaa celebratory symbols include a mat (Mkeka) on which other symbols are placed: a Kinara (candle holder), Mishumaa Saba (seven candles), mazao (crops), Mahindi (corn), a Kikombe cha Umoja (unity cup) for commemorating and giving shukrani (thanks) to African Ancestors, and Zawadi (gifts).[9] Supplemental representations include a Nguzo Saba poster, the black, red, and green bendera (flag), and African books and artworks – all to represent values and concepts reflective of African culture and contribution to community building and reinforcement.[10]

The shape of the kinara was inspired by the form of the royal throne of the Ashanti Empire, in what is now Ghana.[11] The candles are also symbolic, numbering seven, one for each of the seven days and principles of Kwanzaa. There is one black candle in the center representing the people, three red for their struggle, and three green candles for the future and hope that comes from their struggle.[2] The traditional Kwanzaa greeting is Habari Gani, a Swahili phrase meaning "How are you?" The answer is the principle for the day of Kwanzaa, "Umoja," on the first day, "Kujichagulia," on the second day and so forth.[12] In English, the proper greeting is "Joyous Kwanzaa."[13]

At the end of each day, celebrants light a candle starting with the black candle on the first night and continuing from left to right on the following days until all candles are lit on the seventh night.[13]

Families celebrating Kwanzaa decorate their households with objects of art, colorful African cloth such as kente, especially the wearing of kaftans by women, and fresh fruits that represent African idealism. It is customary to include children in Kwanzaa ceremonies and to give respect and gratitude to ancestors. Libations are shared, generally with a common chalice, Kikombe cha Umoja, passed around to all celebrants.

A Kwanzaa ceremony may include drumming and musical selections, libations, a reading of the African Pledge and the Principles of Blackness, reflection on the Pan-African colors, a discussion of the African principle of the day or a chapter in African history, a candle-lighting ritual, artistic performance, and, finally, a feast (karamu).

At first, observers of Kwanzaa avoided the mixing of the holiday or its symbols, values, and practice with other holidays, as doing so would violate the principle of kujichagulia (self-determination) and thus violate the integrity of the holiday, which is partially intended as a reclamation of important African values. Today, many African American families celebrate Kwanzaa along with Christmas and New Year's.[11] Frequently, both Christmas trees and kinaras, the traditional candle holder symbolic of African American roots, share space in Kwanzaa-celebrating households. For people who celebrate both holidays, Kwanzaa is an opportunity to incorporate elements of their particular ethnic heritage into holiday observances and celebrations of Christmas.

Cultural exhibitions include the "Spirit of Kwanzaa," an annual celebration featuring dance, music, and spoken word performances presented by the Dance Institute of Washington.[14]

Starting in the 1990s, the holiday became increasingly commercialized, with the first Hallmark Card being sold in 1992,[15] leading to concern about this damaging the holiday's values.[16] The holiday also saw a greater public recognition as the first Kwanzaa stamp, designed by Synthia Saint James, was issued by the United States Post Office in 1997,[17] and in the same year Bill Clinton gave the first presidential declaration marking the holiday.[18]

Kwanzaa's popularity has spread beyond the United States to the World African community. The holiday had spread to Canada by the early 1990s, celebrated in a similar fashion as in the US.[19] Kwanzaa celebrations have become popular in Brazil, being held in several cities.[20]