Washington's Birthday is a United States federal holiday celebrated on the third Monday of February in honor of George Washington, the first President of the United States, who was born on February 22, 1732 (by the Gregorian calendar). Since the Uniform Federal Holidays Act of 1971, its observance can occur from February 15 to 21, inclusive.

Colloquially, the day is also now widely known as Presidents' Day and is often an occasion to honor all who have served as president, not just George Washington. In particular, Abraham Lincoln, whose birthday is February 12, is often honored together with Washington. Celebrations involve honoring Washington as the founding president in ways both serious, such as reading his Farewell Address, to the more frivolous, such as eating cherry pie. The long weekend has become an opportunity for shopping for deals as most businesses remain open, often offering sales and other promotions.

Procession of events for the centennial celebration of Washington's birthday, Philadelphia, February 1832 An early draft of the Uniform Monday Holiday Act would have renamed the holiday "Presidents' Day" to honor the birthdays of both Washington and Lincoln, which would explain why the chosen date falls between the two, but this proposal failed in committee, and the bill was voted on and signed into law keeping the name "Washington's Birthday."[2]

A previous attempt to create a Presidents Day had occurred in 1951 when the "President's Day National Committee" was formed by Harold Stonebridge Fischer of Compton, California, who became its National Executive Director for the next two decades. The purpose was not to honor any particular president but to honor the office of the presidency. It was first thought that March 4, the original inauguration day, should be deemed Presidents Day, but the bill recognizing March 4 stalled in the Senate Judiciary Committee (which had authority over federal holidays). The committee felt that, given its proximity to Lincoln's and Washington's Birthdays, three holidays so close together would be unduly burdensome. But meanwhile the governors of a majority of the states issued proclamations declaring March 4 Presidents' Day in their respective jurisdictions.[3]

By the mid-1980s, with a push from advertisers, the term "Presidents' Day" began its public appearance.[4] 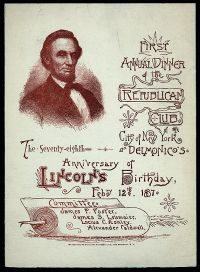 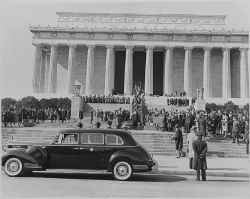 Lincoln's Birthday is a legal, public holiday in some U.S. states, observed on the anniversary of Abraham Lincoln's birth on February 12, 1809. Connecticut, Illinois,[5] Indiana,[6] Ohio, Texas, California, Missouri, and New York observe the holiday on this day.

The earliest known observance of Lincoln's birthday occurred in Buffalo, New York, in either 1873 or 1874. Julius Francis (d. 1881), a Buffalo druggist, made it his life's mission to honor the slain president. He repeatedly petitioned Congress to establish Lincoln's birthday as a legal holiday.[7]

The day is marked by traditional wreath-laying ceremonies at Abraham Lincoln Birthplace National Historic Site in Hodgenville, Kentucky, and at the Lincoln Memorial in Washington, D.C. The latter has been the site of a ceremony ever since the Memorial was dedicated. Since that event in 1922, observances continue to be organized by the Lincoln Birthday National Commemorative Committee and by the Military Order of the Loyal Legion of the United States (MOLLUS). A wreath is laid on behalf of the President of the United States, a custom also carried out at the grave sites of all deceased U.S. presidents on their birthdays. Lincoln's tomb is in Springfield, Illinois.

As part of Lincoln's birthday bicentennial, the U.S. Mint released four new Lincoln cents. The commemorative coins have new designs on the reverse showing stages of his life. The first went into circulation on September 12, 2009. The standard portrait of Lincoln's head remains on the front. The new designs include a log cabin representing his birthplace, Lincoln as a young man reading while sitting on a log that he was taking a break from splitting, Lincoln as a state legislator in front of the Illinois Capitol, and the partially built dome of the U.S. Capitol.[8] 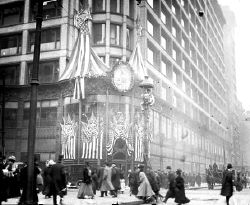 Although Lincoln's Birthday, February 12, was never a federal holiday, nearly half of the state governments have officially renamed their Washington's Birthday observances as "Presidents' Day," "Washington and Lincoln Day," or other such designations.

Because "Presidents' Day" is not the official name of the federal holiday there is variation in how it is rendered ("President's Day," "Presidents' Day," and "Presidents Day"), both colloquially and in the name of official state holidays.[10]

Several states honor presidents with official state holidays that do not fall on the third Monday of February. For example, in Massachusetts, the state officially celebrates "Washington's Birthday" on the same day as the federal holiday while state law also directs the governor to issue an annual "Presidents Day" proclamation on May 29 (John F. Kennedy's birthday), honoring the presidents with Massachusetts roots: Kennedy, John Adams, John Quincy Adams, and Calvin Coolidge.[11] In California, Connecticut, Missouri, and Illinois, while Washington's Birthday is a federal holiday, Abraham Lincoln's birthday is still a state holiday, falling on February 12 regardless of the day of the week.

A food traditionally associated with the holiday is cherry pie, based on the legendary chopping down of a cherry tree in Washington's youth.[12]

Until the late 1980s, corporate businesses generally closed on this day, similar to present corporate practices on Memorial Day or Christmas Day. However, after having been moved to the third Monday, most businesses remain open with many offering "Presidents Day" sales and other promotions over the long weekend. Federal and state government services close (U.S. Postal Service, state Departments of Motor Vehicles, federal and state courts).[13] Class schedules at universities and colleges vary depending on the school. Public elementary and secondary schools are generally closed, unless they use the to make up for time lost due to inclement weather. 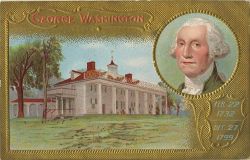 Since 1862 there has been a tradition in the United States Senate that George Washington's Farewell Address be read on his birthday. This tradition began on February 22, 1862, as a morale-boosting gesture during the darkest days of the Civil War.[18]