John Quincy Adams (July 11, 1767 – February 23, 1848) was an American lawyer, diplomat, congressman, and sixth president of the United States. The son of the revolutionary leader and second U.S. president, John Adams, John Quincy was a precocious intellect and patriot who, as a child, watched the Battle of Bunker Hill from a hilltop above the family farm. Adams served as secretary to his father when the elder Adams was posted as minister to France, and after graduating from Harvard College, Adams was appointed minister to the Netherlands at age 26. In 1802, he was elected to the United States Senate and later appointed minister to Russia by President James Madison.

As secretary of state in the administration of James Monroe, Adams negotiated territorial rights to Florida from Spain and helped formulate what came to be known as the Monroe Doctrine, a policy deterring European colonial adventurism in the Western Hemisphere. As president, he proposed a grand program of modernization and educational advancement, but was unable to gain its approval through the United States Congress. After his presidency, he became the only former U.S. chief executive to serve in Congress. As a representative from Massachusetts from 1830 to 1848, he was an early and outspoken opponent of slavery, arguing that if a civil war ever broke out the president could abolish slavery by using his war powers, a policy followed by Abraham Lincoln when he issued the Emancipation Proclamation of 1863. He collapsed on the House floor in 1848, and died shortly after.

Like his father, Adams was religiously devout and his deep Christian convictions informed his political principles as well as his private life. His son, Charles Francis Adams, was a leading diplomat during the American Civil War, and grandson, Henry Adams, a noted historian of the Jefferson presidency and a prominent man of letters.

John Quincy Adams was born in Braintree, Massachusetts, in a part of town which eventually became Quincy. The son of John and Abigail Adams, both with ancestry tracing to the first generation of Puritan New England immigrants, John Quincy revered both of his parents for their emphasis on virtue and the cause of liberty. As a seven year old boy, the young Adams with his mother witnessed the Battle of Bunker Hill from a hilltop by his home, and spent his formative early years with a precocious awareness that his often-absent father was engaged in the historic effort to obtain liberty for a new nation.

Abigail regularly instructed the child on both the virtues of the Christian faith and the singular calling of his important father. The voluminous correspondence between the elder Adams and Abigail often included admonitions to the youth, which were read with the gravity of sacred scripture. The elder Adams asked his son to join him in being the "sworn enemy of ingratitude, injustice, cowardice, and falsehood," and when not engaged in his Latin and Greek studies, the ten-year-old boy should prepare for "a role in wars, congresses, and negotiations certain to occur as the nation developed."[1] John Quincy's earliest letters suggest that his controlling ambition was to measure up to the expectations of his parents, with reassurances that he was seeking "to be a better boy" so his parents would never "be ashamed of me."[2]

At the remarkable age eleven, Adams began a public career in the service of the nation, accompanying his father who served as an American envoy to France from 1778 until 1779, and to the Netherlands in 1780. During this period, he acquired his early education at institutions such as the University of Leiden. After returning to America, he entered Harvard College and graduated in 1787. He was then admitted to the bar and began practicing law in Boston.

George Washington appointed Adams as minister to the Netherlands from 1794 until 1796, and to Portugal in 1796. With Washington's urging, the first president's successor, John Adams, appointed the younger Adams minister to Russia, a post he held from 1797 until 1801. While serving abroad, he married Louisa Catherine Johnson, the daughter of an American merchant.

Adams afterward returned to Quincy, beginning his political career in 1802, when he was elected to the Massachusetts Senate. Adams was an unsuccessful Federalist candidate for election to the United States House of Representatives in the same year. He was later elected as a Federalist to the United States Senate, serving from March 4, 1803 until June 8, 1808, breaking with the Federalists and becoming a Republican.

Adams served again as minister to Russia from 1809 until 1814, chief negotiator of the U.S. commission for the Treaty of Ghent in 1814, and minister to the Court of St. James (United Kingdom of Great Britain) from 1815 until 1817.

Adams served as secretary of state in the administration of President James Monroe from 1817 until 1825, a tenure during which he was instrumental in the acquisition of Florida. Typically his views were consonant with those espoused by Monroe. As secretary of state, he negotiated the Adams-Onís Treaty and wrote the Monroe Doctrine, which cautioned European nations against meddling in the affairs of the Western Hemisphere.

Adams ran against three other candidates—Speaker of the House Henry Clay, Secretary of the Treasury William H. Crawford, and Tennessee senator Andrew Jackson—in the presidential election of 1824. After Crawford suffered a stroke there was no clear favorite.

After the elections, no one had a majority of either the electoral votes or the popular votes, although Andrew Jackson was the winner of a plurality of both. The House of Representatives had to decide and dropped the electoral votes of Henry Clay, with the least votes. Clay then gave his support to Adams who won on the first ballot and was named president. Adams then named Clay as secretary of state to the angry complaints of Jackson, who alleged a "corrupt bargain" and vowed to run again in 1828.

Adams served one term as president, from March 4, 1825 to March 4, 1829. His election marked the end of a period known as the "Era of Good Feelings," an interregnum following the demise of the Federalist Party when the successive administrations of the Virginia Democrats Thomas Jefferson, James Madison, and James Monroe dominated American politics.

During his term, he worked with Henry Clay on developing the American System of internal improvements. In his first annual message to Congress, Adams presented an ambitious program for modernization that included roads, canals, a national university, an astronomical observatory, and other initiatives. The support for his proposals was limited, even among his own supporters. His critics accused him of unseemly arrogance because of his narrow victory. Most of his initiatives were opposed in Congress by Jackson's supporters, who remained outraged over the 1824 election. 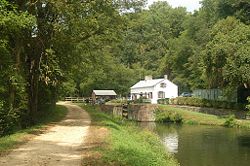 Nevertheless, some of his proposals were adopted, specifically the extension of the Cumberland Road into Ohio with surveys for its continuation west to St. Louis, the beginning of the Chesapeake and Ohio Canal, the construction of the Delaware and Chesapeake Canal and of the Portland to Louisville Canal around the falls of the Ohio, the connection of the Great Lakes to the Ohio River system in Ohio and Indiana, and the enlargement and rebuilding of the Dismal Swamp Canal in North Carolina.

One of the issues which divided the administration was protective tariffs. Henry Clay was a supporter, but Adams' Vice President, John C. Calhoun, was an opponent. The position of Adams was unknown, because his constituency was divided. After Adams lost the control of Congress in 1827, the situation became more complicated.

He and Clay set up a new party, the National Republican Party, but it never took root in the states. In the elections of 1827, Adams and his supporters lost the control of Congress. Senator Martin Van Buren, a future president and follower of Jackson, became one of the leaders of the Senate.

Adams is regarded as one of the greatest diplomats in American history, yet during his term as president, Adams achieved little of consequence in foreign affairs. One of the reasons was the opposition in Congress, where rivals were determined to deny him any mark of success. For example, when the new Latin American republics, formerly Spanish colonies, convened a congress to promote cooperation in the Western Hemisphere, they invited Adams to send delegates. Congress, however, denied him the money to do so.

After the election of Adams in 1825 , the defeated Andrew Jackson resigned from his Senate seat. For four years he worked hard, with help from his supporters in Congress, to defeat Adams in the presidential election of 1828. The campaign was very much a personal one. Although neither candidate personally campaigned, their political followers organized many campaign events and both were heatedly attacked in the press. This reached a low point when Jackson's wife, Rachel, was accused of bigamy. She died a few weeks after the elections and Jackson never forgave Adams for this.

In the end, Adams lost the election in a landslide. He won exactly the same states that his father had won in the election of 1800: The New England states, New Jersey, and Delaware. Jackson won all other states except New York, which gave 16 of his electoral votes to Adams.

After his defeat Adams didn't attend Jackson's inauguration, just as his father had been absent at Jefferson's inauguration in 1801. Rather than retiring from public life, he went on to win election as a National Republican and Whig to the House of Representatives. He was asked by his neighbors to run, and he agreed under two conditions: He would never solicit their votes and he would follow his conscience at all times. Adams served from 1831 until his death in 1848.

In 1834, he was an unsuccessful candidate for governor of Massachusetts. In 1841, Adams represented the United States v. Amistad Africans in the Supreme Court of the United States and successfully argued that the Africans, who had seized control of a Spanish ship where they were being held as illegal slaves, should not be taken to Cuba but should be returned home as free people.

Adams died of a cerebral hemorrhage on February 23, 1848, in the Capitol Building, Washington, D.C. His interment was in the family burial ground at Quincy, and he was subsequently re-interred after his wife's death in a family crypt in the United First Parish Church across the street, where his tomb can be viewed today. His parents are also interred there.

Adams's son, Charles Francis Adams, also pursued a career in diplomacy and politics and was instrumental in securing Great Britain's neutrality during the American Civil War. The John Quincy Adams birthplace, now part of Adams National Historical Park, is open to the public, as is the nearby Abigail Adams Cairn that marks the site from which Adams witnessed the Battle of Bunker Hill as a child.