Cordell Hull (October 2, 1871 – July 23, 1955) was an American politician from the U.S. state of Tennessee. He is best-known as the longest-serving Secretary of State, having held the position for 11 years (1933–1944) in the administration of President Franklin Delano Roosevelt. Hull received the Nobel Peace Prize in 1945, for his role in establishing the United Nations, and was referred to by President Roosevelt as the "Father of the United Nations."

Hull was born in a log cabin in Olympus, which is now part of Pickett County, Tennessee, but had been incorporated from Overton County, Tennessee. Hull became the elected chairman of the Clay County Democratic Party at the age of 19.

In 1891, he graduated from Cumberland School of Law at Cumberland University and was admitted to the bar as a teenager. He served in the Tennessee House of Representatives from 1893 to 1897. During the Spanish-American War, Hull served in Cuba as a captain in the Fourth Regiment of the Tennessee Volunteer Infantry.

In 1945, Cordell Hull was awarded the Nobel Peace Prize for "co-initiating the United Nations."

Hull died after suffering several strokes and heart attacks in 1955, in Washington, D.C., and is buried in the vault of the Chapel of St. Joseph of Arimathea in the Washington National Cathedral, which is an Episcopal church.

There is now a Cordell Hull Museum located near his birthplace in Byrdstown, Tennessee, which houses his papers and other memorabilia.

Hull was born in Olympus, Pickett County, Tennessee, third of the five sons of William "Uncle Billy" Paschal Hull (1840–1923) and Elizabeth (Riley) Hull (1841–1903), who had married after the Civil War.[1] The first Hull ancestors that had journeyed to Tennessee, Allen B. Hull and his wife Syreana, came from Virginia after being promised land grants from the Continental Congress in reward for their service during the American Revolutionary War.[2] His mother's ancestors had come to Tennessee for the same reason and from the same state. His brothers were named Orestes (1868), Sanadius (1870), Wyoming (1875), and Roy (1881). He attended college from 1889 until 1890. At the age of 19, Hull became the elected chairman of the Clay County Democratic Party.[3] In 1891, he graduated from Cumberland School of Law at Cumberland University and was admitted to the bar.[4] He served in the Tennessee House of Representatives from 1893 to 1897.[5]

During the Spanish-American War, Hull served in Cuba as a captain in the Fourth Regiment of the Tennessee Volunteer Infantry.[6]

Hull married Rose Frances (Witz) Whitney (1875–1954), a one-time divorcee, in 1917. The couple had no children. Rose was the daughter of Mr. and Mrs. Isaac Witz of Staunton, Virginia. Witz was a banker interested in industrialism.[7]

Hull was elected to the Senate in 1930. In 1933, Roosevelt named him Secretary of State.[13] Hull strove to enlarge foreign trade and lower tariffs. In 1943, Hull served as United States delegate to the Moscow Conference.

Hull was the Secretary of State responsible for foreign relations before and during the attack on Pearl Harbor. He sent the Hull note to Japan prior to the attack, which was formally titled "Outline of proposed Basis for Agreement Between The United States and Japan" but had been part of the United States' attempt to open Chinese markets to U.S. goods, against Japanese interests there.

On the day of the attack, not long after it had begun, Hull received the news that it was taking place. The Japanese ambassador and Japan's special envoy were waiting to see Hull at that moment.[14] Admiral Edwin T. Layton, at the time chief intelligence officer to the commander of the Pacific Fleet, tells the rest of the story:

Roosevelt advised him not to tell them about the raid but to receive them formally and coolly bow them out. After he had glanced at their copy of the fourteen-part message [Japan's declaration that negotiations were at an end], Hull's anger burst forth. "In all my fifty years of public service," he told the astonished diplomats, "I have never seen such a document that was more crowded with infamous falsehood and distortion." Nomura and Kurusu, who had not been told of the attack, bowed themselves out in an embarrassed fluster. A department official overheard Hull muttering under his breath as the door closed, "Scoundrels and piss-ants."[15] 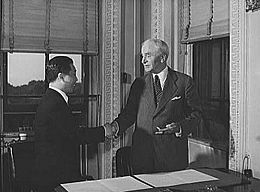 Hull and Chinese Ambassador Wey Daw-ming at the State Department exchanging ratifications of the treaty abolishing extra-territorial "rights" of the United States in China.

When the Free French Forces of Charles de Gaulle liberated the islands of Saint-Pierre and Miquelon (located south of Newfoundland) in December 1941, Hull lodged a very strong protest and even went as far as referring to the Gaullist naval forces as "the so called Free French." His request to have the Vichy governor reinstated was met with strong criticism in the American press. The islands remained under the Free French movement until the end of World War II.

There is some controversy over Hull's role in the 1939 SS ''St. Louis'' affair, where Jewish refugees were denied entry into the U.S. These Jews fled Europe to escape from the Nazis and after being denied entry into Cuba and the U.S. were returned to Europe where most became victims of the Holocaust, after the Nazis invaded Western Europe in the following years.

To wit, there were two conversations on the subject between (Secretary of the Treasury) Morgenthau and Secretary of State Cordell Hull. In the first, 3:17 PM on 5 June 1939, Hull made it clear to Morgenthau that the passengers could not legally be issued U.S. tourist visas as they had no return addresses. Furthermore, Hull made it clear to Morgenthau that the issue at hand was between the Cuban government and the passengers. The U.S., in effect, had no role. In the second conversation at 3:54 PM on 6 June 1939, Morgenthau said they did not know where the ship was and he inquired whether it was “proper to have the Coast Guard look for it.” Hull responded by saying that he didn’t see any reason why it could not. Hull then informed him that he did not think that Morgenthau would want the search for the ship to get into the newspapers. Morgenthau said. “Oh no. No, no. They would just—oh, they might send a plane to do patrol work. There would be nothing in the papers.” Hull responded, “Oh, that would be all right.”[16]

In September 1940, First Lady Eleanor Roosevelt maneuvered with another State Department official to bypass Hull's refusal to allow Jewish refugees aboard a Portuguese ship, the Quanza, to receive visas to enter the U.S. Through Mrs. Roosevelt's efforts, the Jewish refugees disembarked on September 11, 1940, in Virginia.[17]

Hull was the underlying force and architect in the creation of the United Nations, as recognized by the 1945 Nobel Prize for Peace, an honor for which Franklin D. Roosevelt nominated him. During World War II, Hull and Roosevelt spent tireless hours working toward the development of a world organization to prevent a third World War. Hull and his staff drafted the "Charter of the United Nations" in mid-1943.

Never one to sit idly by if American interests were (in his view) threatened, Hull would think nothing of dressing down close allies, such as what happened to New Zealand Prime Minister Peter Fraser in early 1944, over U.S. objections to the Canberra Pact (a military treaty of alliance between Australia and New Zealand made in February 1944 without U.S. consultation).

Hull resigned as Secretary of State in November 1944, because of failing health. Roosevelt described Hull, upon his departure as "the one person in all the world who has done his most to make this great plan for peace (the United Nations) an effective fact." The Norwegian Nobel Committee honored Hull with the Nobel Peace Prize in 1945, in recognition of his efforts for peace and understanding in the Western Hemisphere, his trade agreements, and his work to establish the United Nations. Hull was the longest-serving Secretary of State.[18] He remained in office for 11 years, nine months.

Hull died in Washington, D.C., and is buried in the vault of the Chapel of St. Joseph of Arimathea in the Washington Cathedral. 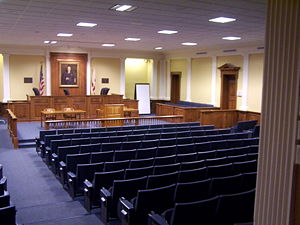 In the Worldwar series of alternate history novels by Harry Turtledove, Hull becomes president at some point in 1944, following the deaths of first Vice-President Wallace and then President Roosevelt.

Hull worked hard for his country and for the international community. He was highly dedicated to promoting democracy at all costs. He is remembered for his dedication to extending the reaches of democracy. He was highly productive in his national role and was known as a man of integrity.[19]

His memory is preserved by Cordell Hull Dam on the Cumberland River near Carthage, Tennessee.

A segment of Kentucky highway routes 90, 63, and 163, from Interstate 65 at Mammoth Cave National Park south to the Tennessee State Line, is named "Cordell Hull Highway."

The Shoreline School District in Shoreline, Washington, had a Cordell Hull Middle School, which was renamed in the mid-1990s to Meridian Park Elementary, after a renovation.

There is a Cordell Hull Lake, covering approximately 12,000 acres (49 km²), in the vicinity of Nashville.