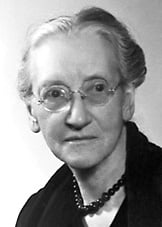 Emily Greene Balch (January 8, 1867 – January 9, 1961) was an American academic, writer, and pacifist who received the Nobel Peace Prize in 1946 (the prize that year was shared with John Mott), notably for her work with the Women's International League for Peace and Freedom (WILPF). Balch's work with the Women's League contributed significantly to the work of the League of Nations. During World War II, she modified her pacifism because she believed that military opposition to Adolf Hitler's Germany was a necessary evil. Her ceaseless efforts for peace and a global moral consensus occupied all her energy and gifts. She never married. Even when she was awarded the Nobel Prize, her name was less widely known than it had been in the years before World War II. Her life, however, and the fact that she received such a high level of recognition as a Nobel Prize, testifies to the fact that people who never hold political office can still make a real difference in helping to translate the human dream for a better, safer, more peaceful world into reality. Balch never led a nation, but her work did impact on the affairs of nations. She was a champion of internationalism, believing that freer movement around the world and institutions that cross national boundaries will help to unify the human race into a single moral consciousness, preventing the type of nationalism that fueled racial hatred in Hitler's Germany.

Balch was born in the Jamaica Plain neighborhood of Boston into an affluent family. Her father was a successful attorney and had also served a United States Senator as Secretary. Balch was amongst the first graduates of Bryn Mawr College in 1889. She continued to study sociology and economics in Europe, spending 1889-90 at University in Berlin and at such Colleges as Harvard and Chicago in the United States. In 1896, she joined the faculty of Wellesley College, becoming a full professor of economics and sociology in 1913. Raised a Unitarian, Balch became a Quaker in 1921. She never married.

During the First Hague Peace Conference of 1889 and the second conference of 1907, Balch took a keen interest in the proceedings. The Conferences aimed to "seeking the most effective means of ensuring to all peoples the benefits of a real and lasting peace, and, above all, of limiting the progressive development of existing armaments."[1] When World War I broke out, Balch came to the conclusion that she ought to direct her energies towards ridding the world of the scourge of war. In 1915, she took part in the International Congress of Women at the Hague, where she played a major role in forming the Women's International Committee for Permanent Peace, which later became the Women's International League for Peace and Freedom, On her return to the US she started to campaign against America's entry into the conflict. With others, she urged for the use of mediation instead of force. She co-wrote, with Jane Addams and Alice Hamilton, Women at The Hague: The International Congress of Women and Its Results (1915). The League drafted peace proposals for consideration by nations at war. In 1915, she attended Neutral Conference for Continuous Mediation at Stockholm, writing International Colonial Administration in which she set out a scheme for administrating colonies similar to what was later adopted by the League of Nations. In total, she attended nine conferences organized by the League. Between the wars she also began a series of international summer camps. She lectures widely on matters related to peace.

Her peace activism had so far been facilitated by a grant of leave of absence from Wellesley College. When her request for an extension of this was refused, her contract at the College was terminated. Subsequently, Balch accepted offer of employment on the editorial staff of The Nation. In 1918, Approaches to the Great Settlement, with an introduction by Norman Angell, who went on to win the Nobel Peace Prize for 1933. In 1919 she was at Zurich for the Second International Congress of Women where she was invited to serve as secretary of its organizing body, the Women's International League for Peace and Freedom. She occupied this position until 1922. However, in 1934 when the League experienced financial difficulties she international secretary for a year and a half as a volunteer. It was to this League that Miss Balch donated her share of the Nobel Peace Prize money. Between the First and Second World Wars Balch offered her services to governments around the world, and worked in collaboration of the League of Nations which she tried to persuade the USA to join. She worked on such issues as among them, disarmament, the internationalization of aviation and drug control and aid to victims of Nazi oppression. In 1926, she took part in a mission to Haiti, and was the main author of a report, Occupied Haiti. Due to the evils of the Nazi regime, she did not oppose World War II. On this issue, she parted company from many fellow pacifists as well as from her adopted Quaker tradition. Instead, she came to realize the fundamental importance of human rights as a basis of respect between peoples and nations, which she linked with the need to increase what she called "internationalism," such as free passage on the seas, in the air and from state to state. Her travels took her to Egypt and also to Palestine. She challenged the US isolationist policy, which most members of the US Women's League supported. She did much to assist refugees from Germany during the war.

In 1946, at the age of 79, Balch was co-recipient with John Raleigh Mott of the Nobel Peace Prize. In presenting the Prize, Gunner Jahn paid tribute to a life spent in working for peace:

Even if we cannot say to her: ‘Do you not smile on reaching the goal?’, that goal which is the guiding light of those whose sights are set beyond the ending of each day, we can still pay her homage and express our gratitude for her lifelong, indefatigable work for the cause of peace. She has taught us that the reality we seek must be earned by hard and unrelenting toil in the world in which we live, but she has taught us more: that exhaustion is unknown and defeat only gives fresh courage to the man whose soul is fired by the sacred flame.[2] In her Nobel Lecture, Balch warned of the dangers of nationalism, which too easily elevates "us" over "others" and which had divided the world into "a considerable number of states, each claiming complete and unlimited sovereignty, living side by side without being integrated in any way or under any curb, governed by an uneasy balance of power manipulated by diplomatic maneuvering, based not on principles accepted by all but on reasons of state, recognizing no common religious or ethical control nor any accepted rules of conduct and united by no common purpose." This contrats, she said, with the "relative universalism of various earlier historical periods" such as the "great Roman peace, with one classic tradition, one political model, and one literary medium." She went on to stress factors that unify humanity, including "growing humaneness, a revolt against all avoidable suffering, a new concern for social welfare in all its aspects. This motive has increased in both Christian and non-Christian communities."[3]

In presenting the Nobel Peace Prize to Balch in 1946, the Chairman of the Nobel Committee commented that "The name of Emily Balch may not be familiar to many of us here, and there are probably few people in Europe who still remember her now." "The war," he continued, "has erased so many names" and "being a modest person," Balch "was never one to seek the limelight even at the height of her activity." Her name may not now be among the most widely known recipients of the Nobel Peace Prize, such as Martin Luther King, Jr or Desmond Tutu but her tireless efforts for peace over many decades did bear fruit. Many resolution passed by the Women's League were later adopted by the League of Nations. Balch never held high political office. For her whole life, she was, in fact, a private citizen. Yet there is little doubt that her life made a difference to the world, helping to promote and to defend universal ideals of morality, human rights and peace. For anyone to be recognized with the award of a Nobel Prize is evidence that their lives represent a high level of achievement, this time in the humanitarian and ethical field.