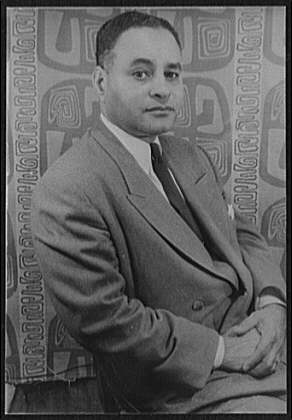 Dr. Ralph Johnson Bunche (August 7, 1904 – December 9, 1971) was an American political scientist and diplomat, who received the 1950 Nobel Peace Prize for his late 1940s mediation in Palestine. He was the first person of color to be so honored in the history of the Prize. He was the grandson of a slave who achieved a doctorate from Harvard University. In addition to his role in peacemaking, Bunche is remembered for his support of the civil and human rights movements. He did not found or serve as an officer of any civil rights organizations but through his writing and teaching he helped to provide a solid, intellectual foundation for anti-racist and civil rights activism. He played an important role in the formation of the United Nations at both Dumbarton Oaks (1944) and San Fransisco (1945) representing the United States. In 1946, he was appointed director of the UN Trusteeship Department. He worked closely with the United Nation's mediator in the Arab-Israeli conflict, Folke Bernadotte, whom he succeeded in September 1948, following Bernadotte's assassination. He continued to serve the UN as undersecretary for special political affairs. In 1960, he was UN special envoy in the war-torn Congo. In 1963, he received the Medal of Freedom from President Lyndon B. Johnson. "His message," says his Nobel biography, "has been clear: Racial prejudice is an unreasoned phenomenon without scientific basis in biology or anthropology; 'segregation and democracy are incompatible;' blacks should maintain the struggle for equal rights while accepting the responsibilities that come with freedom; whites must demonstrate that 'democracy is color-blind.'"[1] Bunche strongly supported the UN's peace-keeping role, pointing out that despite failures, the UN had the courage to do what the old League of Nations had failed to do, to "step in and tackle the buzz saw."[2]

Bunche was born in Detroit, Michigan, to an African-American family; his father was a barber, his mother an amateur musician. His grandmother had been born in slavery. They moved to Albuquerque, New Mexico, when he was a child to improve his parents' health. His parents died soon after, and he was raised by his grandmother in Los Angeles, who looked "white," but was an active member of the black community.

Bunche was a brilliant student, a top debater, and the valedictorian of his graduating class at Jefferson High School. He attended the University of California, Los Angeles, and graduated summa cum laude in 1927—again as the valedictorian of his class. Using the money his community raised for his studies, and a scholarship from the University, he studied at Harvard. There he earned a master's degree in political science in 1928, and a doctorate in 1934, though he was already by that time teaching in Howard University's Department of Political Science, which he chaired from 1928 until 1950. He lived in the Brookland neighborhood of Washington, D.C., and was a member of the American Federation of Teachers affiliate at Harvard.

Between 1932 and 1933, he held the Rosenwald Fellowship, which funded research in Africa, where he compared French rule in Togoland and Dahomey. His 1934 dissertation was based on this field work. His dissertation attracted the Toppan Prize for outstanding research in social studies. Between 1936 and 1938, he did postdoctoral research in anthropology at Northwestern University, the London School of Economics, at Capetown University in South Africa, funded by a Social Science Research Council fellowship.

In 1936, Bunche authored a pamphlet entitled A World View of Race. In it, Bunche wrote: "And so class will some day supplant race in world affairs. Race war will then be merely a side-show to the gigantic class war which will be waged in the big tent we call the world."

Bunche spent time during World War II as an analyst in the Office of Strategic Services (the predecessor of the Central Intelligence Agency) before joining the State Department, where he was acting head of the Division of Dependent Area Affairs in the State Department. In 1943, Bunche went to the State Department, where he became associate chief of the division of dependent area affairs under Alger Hiss. He became, with Hiss, one of the leaders of the Institute of Pacific Relations (IPR). He advised both the State Department and the military on Africa and on other colonial areas that had strategic importance. In this capacity, he attended conferences of the Institute of Pacific Relations, the UN, the International Labor Organization, and the Anglo-American Caribbean Commission.

He participated in the preliminary planning for the United Nations at Dunbarton Oaks (1944) and at the San Francisco Conference of 1945.

Work with the United Nations

…championed the principle of equal rights for everyone, regardless of race or creed. He believed in “the essential goodness of all people, and that no problem in human relations is insoluble.” Through the UN Trusteeship Council, Bunche readied the international stage for an unprecedented period of transformation, dismantling the old colonial systems in Africa and Asia, and guiding scores of emerging nations through the transition to independence in the post-war era.

Beginning in 1947, Bunche was involved with the Arab-Israeli conflict. He served as assistant to the U.N. Special Committee on Palestine, and thereafter as the principal secretary of the UN Palestine Commission. In 1948, he traveled to the Middle East as the chief aide to Count Folke Bernadotte, who had been appointed by the UN to mediate the conflict. He worked well with the Swedish Count. When Gunner Jahn awarded Bunche his Nobel Prize, he commented on how different the two men's backgrounds were. One was of royal blood, "steeped in all the traditions of a royal family," while "Bunche, whose grandmother had been born in slavery" had "been brought up in poverty" and "was an entirely self-made man."[3]In September, Bernadotte was assassinated by members of the underground Jewish group Lehi. Bunche became the UN's chief mediator and concluded the task with the signing of the 1949 Armistice Agreements, which brought an end to the first Arab-Isreali war, although not a permanent peace. It was for this work that he received the 1950 Peace Prize and many other honors. In presenting the Nobel Peace Prize, Gunner Jahn referred to Bunche's faith in humanity, saying of him that:

He says: "We can achieve understanding and brotherhood between men only when the peoples of different nations feel that what unites them is a common goal which must be quickly attained." Bunche himself has a strong faith in man: I am firmly convinced that ordinary men everywhere are ready to accept the ideals inherent in understanding and brotherhood among men, if only they are given the chance. But before this can happen, men must be sure that they will not become victims of unstable economic conditions, they must not be forced to take part in ruthless and harmful competition in order to survive, and they must be free from the constant threat of being obliterated in a future war. But it is more important still that men be able to shape their ideals free from the influence of petty and narrow-minded men who still in many countries exploit these ideals to further their own ends… But an indolent, complacent, and uninformed people can never feel secure or free.[4]

He continued to work for the United Nations, mediating in other strife-torn regions including The Congo, Yemen, Kashmir, and Cyprus, eventually rising to the position of undersecretary-general in 1968.

As a prominent African-American, Bunche was an active and vocal supporter of the civil rights movement, though he never actually held a titled position in the major organizations of the movement.

Bunche died in 1971, and is buried in Woodlawn Cemetery in The Bronx. 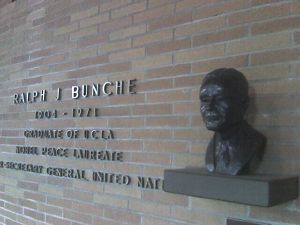 A bust of Ralph Bunche, at the entrance to Bunche Hall, overlooks the Sculpture Garden at UCLA.

Ralph Bunche Park is in New York City, across First Avenue from the United Nations headquarters. Ralph Bunche's house is in the Brookland neighborhood of Washington, DC, where he resided for many years. His legacy lives on in the peace-keeping and conflict resolution work of the UN, of which he was a pioneer in Israel-Palestine. His biography represents an example of a gifted intellectual who was able to place his scholarship at the service of humanity. His faith in humanity enabled him to work for peace and agianst bias and prejudice, as he himself described the qualities necessary for peacebuilding: