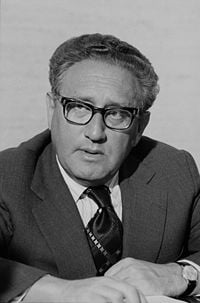 Henry Alfred Kissinger (born Heinz Alfred Kissinger on May 27, 1923) is a German-born U.S. diplomat, Nobel laureate, statesman, scholar, and author of books and articles on U.S. foreign policy, diplomatic history and international relations. He served as U.S. National Security Adviser and later as Secretary of State in the Richard M. Nixon administration, continuing in the latter position after Gerald R. Ford became President in the aftermath of the Watergate scandal.

A proponent of realpolitik (or the realist school of international relations theory as expounded by its modern founder, Hans Morgenthau) Kissinger played a dominant role in American foreign policy between 1969 and 1977. During this time, he pioneered the policy of détente that led to a significant relaxation in U.S.–Soviet tensions and played a crucial role in 1972 talks with Chinese Premier Zhou Enlai that concluded with the "opening" of China and the formation of a new strategic anti-Soviet, Sino–American alliance. He was a recipient of the 1973 Nobel Peace Prize for his efforts to end the Vietnam War.

His foreign policy record made him enemies amongst both anti-war activists and anti-Communists, and the controversy surrounding him has by no means receded in the years since he served in the national government. Nonetheless, he is widely considered the strategic thinker of greatest consequence in the second half of the twentieth century.

Kissinger was born on May 27, 1923, in Fürth in Franconia (Bavaria) as Heinz Alfred Kissinger, to Jewish parents Louis Kissinger and Paula Stern.[1] His name refers to the city of Bad Kissingen. In 1938, fleeing Adolf Hitler's persecution of Jews, his family moved to New York City. Kissinger was naturalized a U.S. citizen in March 1943, while in military training at Camp Croft in Spartanburg, South Carolina.

He spent his high school years in the Washington Heights section of upper Manhattan but never lost his pronounced German accent. Kissinger attended George Washington High School at night and worked in a shaving-brush factory during the day. While attending City College of New York in 1943, he was drafted into the U.S. Army, trained at Clemson College in South Carolina, and became a German interpreter for the 970th Counter Intelligence Corps. Kissinger was legendary for his ability to find and arrest former Gestapo agents in immediate post-war Germany.

Henry Kissinger received his Bachelor of Arts degree summa cum laude at Harvard College in 1950, where he studied under William Yandell Elliott. He received his Master of Arts and Doctor of Philosophy degrees at Harvard University in 1952 and 1954, respectively. His doctoral dissertation was titled A World Restored: Metternich, Robert Stewart, Viscount Castlereagh, and the Problems of Peace 1812–22. Kissinger came to be one of the two main disciples of Hans J. Morgenthau—who founded the modern realist school of international relations theory (that came to dominate U.S. foreign policy in the second half of the twentieth century)—the other being Kenneth W. Thompson.

A liberal Republican and keen to have a greater influence on American foreign policy, Kissinger became an adviser to Nelson Rockefeller, governor of New York state, who sought the Republican nomination for President in 1960, 1964, and 1968. After Richard Nixon won the presidency in 1968, he offered Kissinger the job of National Security Adviser.

With his first wife, Anneliese Fleischer, he had two children, Elizabeth and David. He currently lives with his second wife Nancy Maginnes in Kent, Connecticut. He is the head of Kissinger Associates, a consulting firm.

On October 31, 1973, Egyptian foreign minister Ismail Fahmi met with Richard Nixon and Henry Kissinger about a week after fighting ended in the Yom Kippur War.

Détente with the Soviet Union

As National Security Adviser under Nixon, Kissinger pioneered the policy of détente with the Soviet Union, seeking a relaxation in tensions between the two superpowers. As part of this strategy, he negotiated the Strategic Arms Limitation Talks (culminating in the SALT I treaty) and the Anti-Ballistic Missile Treaty with Leonid Brezhnev, General Secretary of the Communist Party of the Soviet Union. Generally, the period of U.S.-Soviet detente is seen to have endured until the 1979 Soviet invasion of Afghanistan.

Nixon and Kissinger sought to place strategic pressure on the Soviet Union. In order to accomplish this, Kissinger made two secret trips to the People's Republic of China in July and October 1971 to confer with Premier Zhou Enlai, then in charge of Chinese foreign policy. This paved the way for the groundbreaking 1972 summit among Nixon, Zhou, and Communist Party of China Chairman Mao Zedong, as well as the formalization of relations between the two countries, ending 23 years of diplomatic isolation and mutual hostility. The result was the formation of a tacit, strategic anti-Soviet alliance between China and the United States. Today, Kissinger is often remembered by Chinese leaders as "the old friend of the Chinese people." While Kissinger's diplomacy led to economic and cultural exchanges between both sides and the establishment of liaison offices in the Chinese and American capitals, full normalization of relations with the People's Republic of China would not occur until 1979. 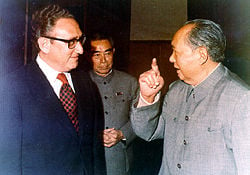 Vietnamization and the Cambodian bombing campaign

Nixon had been elected in 1968 on the promise of achieving "peace with honor" and ending the Vietnam War. Once in office, he began implementing a policy of "Vietnamization" that aimed to gradually withdraw U.S. troops while expanding the combat role of the Army of the Republic of Vietnam (ARVN), so that it would be capable of independently defending South Vietnam against the VietCong, or National Front for the Liberation of South Vietnam and the North Vietnamese army (Vietnam People's Army, or PAVN). At the same time, Kissinger, with Nixon's support, played a key role in expanding American bombing campaigns into Cambodia to target PAVN and VietCong units launching raids against South Vietnam. The 1969-70 bombing campaign was initially secret and ignited significant anti-war protests in the U.S., particularly at university campuses, when it and the 1970 Cambodian Incursion by U.S. and South Vietnamese troops became known.

Kissinger was awarded the 1973 Nobel Peace Prize, along with North Vietnamese diplomatic representative Lê Ðức Thọ, for their work in negotiating an end to the war in Vietnam and American withdrawal. Kissinger accepted the award, but Tho declined, claiming that the peace agreement was not being implemented. Due to fears of disruption from anti-war protesters, Kissinger did not collect the award in person. Rather, it was accepted on his behalf by United States Ambassador to Norway Thomas R. Byrne. War continued in Vietnam until a North Vietnamese victory (the fall of Saigon) in 1975.

Kissinger published lengthy and dramatic telephone transcripts of his activities during the 1973 Yom Kippur War in his 2002 book, Crisis. In 1973, he negotiated the end to the Yom Kippur War, which had begun with a surprise attack against Israel by the Syrians and Egyptians. In response to that attack and the losses suffered by Israel, the U.S. military—with Kissinger's support, which was reluctant at first—conducted the largest military airlift in history. This dramatic and powerful show of substantial support for Israel by the U.S. quite possibly saved Israel from military defeat, and the action also figured strongly in the 1973 decision by OPEC to establish an oil embargo against the United States, which was lifted in March 1974. With American support, Israel regained the territory it had lost in the early fighting and gained new territories from the Arabs, including land in Syria east of land previously captured, known as the Golan Heights, and additionally on the west bank of the Suez Canal (Israel did lose some territory on the eastern side of the Suez Canal that had been in its hands since the end of the 1967 Six Day War).

After the war, Kissinger pressured the Israelis to cede some of the newly-captured land back to the Arabs, contributing to the first phases of lasting Israeli-Egyptian peace. The move saw a warming in U.S.–Egyptian relations, bitter since the 1950s, as the country moved away from its former pro-Soviet stance and into a close partnership with the United States. The peace was finalized in 1978 when U.S. President Jimmy Carter mediated the Camp David Accords (1978), during which Israel returned the Sinai Peninsula in exchange for an Egyptian agreement to recognize Israeli statehood and end hostility.

Kissinger being sworn in as Secretary of State, September 22, 1973. President Nixon and Kissinger's mother, Paula, look on.

Kissinger, like the rest of the Nixon administration, faced extreme unpopularity with the anti-war Left, particularly after the secret U.S. bombing of Cambodia was revealed. However, few doubted his intellect and diplomatic skill, and he became one of the better-liked members of the Nixon administration, which some Americans grew to view as cynical and self-serving. Kissinger was not connected with the Watergate scandal that would eventually ruin Nixon and many of his closest aides; this greatly increased Kissinger's reputation as he became known as the "clean man" of the bunch. 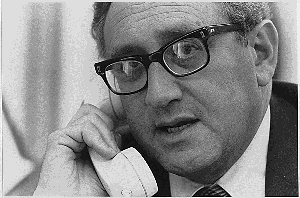 Kissinger is updated on the latest situation in South Vietnam on April 29, 1975.

Kissinger left office when former Democratic Governor of Georgia Jimmy Carter defeated Gerald Ford in the 1976 presidential elections. During the campaign, Carter criticized Kissinger, arguing he was "single-handedly" managing all of America's foreign relations. Carter was later defeated by Republican presidential candidate Ronald Reagan in 1980. In the 1980s and early 1990s, Kissinger played a relatively minor role in the U.S. government because conservatives, who had come to dominate the Republican Party and the Reagan administration from 1981 to 1989, considered Nixonian détente to be a policy of unwise accommodation with the Soviet Union. Kissinger continued to participate in policy groups, and to do political consulting, speaking, and writing. He would often appear as a foreign-policy commentator on American broadcast networks.

In 2002, President George W. Bush appointed Kissinger to chair the 9/11 Commission to investigate the events of the September 11, 2001, terrorist attacks. This led to criticism from Congressional Democrats who accused Kissinger of being secretive and not supportive of the public's right to know. However, following continual Democratic pressure, Kissinger cited conflicts of interest with his clients and stepped down as chairman on December 13, 2002.

In 2006, Washington Post investigative reporter Bob Woodward maintained that Kissinger met regularly with President George W. Bush and Vice President Dick Cheney to offer advice on the war in Iraq.[2] Kissinger confirmed in recorded interviews with Woodward that the advice was the same as he had given in an August 12, 2005, column in the Washington Post: "Victory over the insurgency is the only meaningful exit strategy."[3]

Kissinger owns a consulting firm, Kissinger Associates, and is a partner in Kissinger McLarty Associates with Mack McLarty, former White House Chief of Staff to President Bill Clinton. He also serves on various boards of directors, including Gulfstream Aerospace and Hollinger International, a Chicago-based newspaper group.[4]

In 1998, Kissinger became an honorary citizen of Fürth, Germany, his hometown. He has been a life-long supporter of the SpVgg Greuther Fürth (Spielvereinigung Fürth) football (soccer) club and is now an honorary member.

He served as Chancellor of the College of William and Mary from 2001 to 2005.

From 1995 to 2001, he served on the board of directors for Freeport-McMoran, Inc., a multinational copper and gold producer with significant mining and milling operations in Papua, a province of Indonesia.[5] In February 2000, then-president of Indonesia Abdurrahman Wahid appointed Kissinger as a political adviser. He also serves as an honorary adviser to the United States-Azerbaijan Chamber of Commerce.

Kissinger has long been a satirized or lampooned figure in America and overseas, due in part to his controversial nature and distinctive voice and mannerisms. A few references include: