Henry Knox (July 25, 1750 – October 25, 1806) was an American bookseller from Boston, who, at 24 years old, became the chief artillery officer of the Continental Army and later a close adviser of George Washington during the American Revolution. He was instrumental in forming the Society of Cincinnati, an organization for French and American veterans of the revolutionary war. He served as the fledgling nation's first Secretary of War, from 1785, and remained in office more than 10 years. Knox saw to the first ship building for the United States Navy. He was a staunch backer of the Constitutional Convention and helped to sway Washington toward attending. Knox retired from his government position in 1796.

Knox was born to Scots-Irish immigrants. His father was a ship's captain who died in 1759. Henry left school at the age of 12, and became a clerk in a bookstore to support his mother. He later opened his own bookshop, the London Book Store, in Boston. Largely self-educated as a slow reader, he began to concentrate on military subjects, particularly artillery.

Henry married Lucy Flucker (1756–1824), the daughter of Boston Loyalists, on June 16, 1774. In spite of separations due to his military service, they remained a devoted couple for the rest of his life, and carried on an extensive correspondence. Since the couple fled Boston in 1775, she remained essentially homeless throughout the Revolutionary War. Her parents left with the British during their withdrawal from Boston after the success of George Washington’s army on Dorchester Heights, which ironically hinged upon Knox’s cannons. She would never see them again.

Knox supported the American rebels, the Sons of Liberty, and was present at the Boston Massacre. He volunteered as a member of the Boston Grenadier Corps in 1772, and served under General Artemas Ward at the Battle of Bunker Hill in 1775. Being a member of the Army of Observation, Henry met and impressed General George Washington when he took command. Washington and Knox soon became good friends. As the Siege of Boston continued, he suggested that the cannons at recently captured Fort Ticonderoga could have a decisive impact. Washington commissioned him to colonel and gave him charge of an expedition to retrieve them. His force brought them by ox-drawn sled south along the west bank of the Hudson River from Fort Ticonderoga to Albany, where they crossed the Hudson and then continued east through The Berkshires and finally to Boston. Along this trail are at various points plaques denoting the historic event.[1] 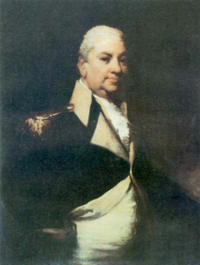 Henry Knox in the Washington Administration, by James Harvey Young, 1873. From the earlier Gilbert Stuart painting.

There are 56 identical plaques on the trail from Fort Ticonderoga to Cambridge, Massachusetts denoting the approximately 56 day length of the journey. Knox and his men averaged approximately 5 ⅜ miles per day, completing the 300 mile trip in 56 days, between December 5, 1775, and January 24, 1776. The Cannon Train was composed of fifty-nine cannon and mortars, and weighed a total of 60 tons.[2] Upon their arrival in Cambridge, when Washington's army took the Heights of Dorchester, the cannons were placed in a heavily fortified position overlooking Boston, from which they seriously threatened the British fleet in the harbor. As a result, the British were forced to withdraw to Halifax on March 17, 1776. After the siege was lifted, Knox undertook the construction and improvement of defenses in Connecticut and Rhode Island, to prepare for the British return. He rejoined the main army later during their withdrawal from New York and across New Jersey.

During the Battle of Trenton, Colonel Knox was in charge of Washington's crossing of the Delaware River. Though hampered by ice and cold, with John Glover's Marbleheaders (14th Continental Regiment) manning the boats, he got the attack force of men, horses, and artillery across the river without loss. Following the battle, he returned the same force, along with hundreds of prisoners, captured supplies, and all the boats, back across river by the afternoon of December 26. Knox was promoted to brigadier general for this accomplishment.

Knox stayed with the Main Army throughout most of the active war, and saw further action at Princeton, Brandywine, Germantown, Monmouth, and Yorktown. In 1777, while the Army was in winter quarters at Morristown, New Jersey, he returned to Massachusetts to improve the Army's artillery capability. He raised an additional battalion and established the Springfield Armory before his return in the spring. That arsenal remained a valuable source of weapons and ammunition for the rest of the war. In early 1780, he was a member of the court-martial of Major John André. Knox made several other trips to the Northern states as Washington's representative to increase the flow of men and supplies to the army.

After Yorktown, Knox was promoted to major general. In 1782, he was given command of the post at West Point. In 1783, he was one of the founders of the Society of the Cincinnati, and led the American forces into New York City as the British withdrew. He stood next to Washington during his farewell on December 4, at Fraunces Tavern. After Washington retired, he was the senior officer of the Continental Army from December 1783, until he left it in June 1784.

The Continental Congress made Knox Secretary of War under the Articles of Confederation on March 8, 1785. He held that position without interruption until September 12, 1789, when he assumed the same duties as the United States Secretary of War in Washington's first Cabinet.

As secretary, Knox urged and presided over the creation of a regular Navy, was responsible for Indian policy and a plan for a national militia, and created a series of coastal fortifications. He oversaw the inclusion of the Springfield Armory as one of two national facilities. In 1791, Congress, acting on a detailed proposal from Knox, created the short-lived Legion of the United States.

On December 31, 1794, Knox left the government to devote himself to caring for his growing family. He was succeeded as Secretary of War by Timothy Pickering.

Knox settled his family at Montpelier,[3] an estate near Thomaston, Maine. He spent the rest of his life engaged in cattle farming, ship building and brick making. Although he had left national service, he represented his new community in the Massachusetts General Assembly (Maine then being part of Massachusetts). In 1806, while visiting a friend in Union, Maine, he swallowed a chicken bone which punctured his intestine. He died of an infection (peritonitis) three days later on October 25, 1806, and was buried in Thomaston.

George Washington might not have realized the same degree of military success on his December 25–26, 1776 crossing the Delaware and the subsequent turning of the American Revolutionary War for the colonists at the Battle of Trenton and the Battle of Princeton had it not been for the determination of Henry Knox. Knox had the responsibility of crossing Washington's soldiers that night. The following day he reported to Washington:

…the army … passed the river on Christmas night, with almost infinite difficulty… The floating ice in the river made the labor almost incredible. However perseverance accomplished what at first seemed impossible … The night was cold and stormy; it hailed with great violence. 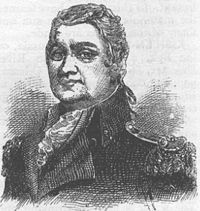 Henry Knox; this image was published 1881 in Young Persons' Cyclopedia of Persons and Places.

Many incidents in Knox's career attest to his character. As one example, when he and Lucy were forced to leave Boston in 1775, his home was used to house British officers who looted his bookstore. In spite of personal financial hardships, he managed to make the last payment of 1,000 pounds to Longman Printers in London to cover the price of a shipment of books that he never received.

Knox supported the American Revolution and was a primary adviser to Washington during the fight for independence. Afterwards, he was influential in inspiring Washington to consider the drafting of the U.S. Constitution and would become the country's first Secretary of War. He was also responsible for seeing to the creation of the new nation's first naval ships. Knox was a staunch patriot who served his country with skill. He was dedicated to the creation of a strong, new American republic, and he contributed to the realization of that dream steadfastly throughout his career.

Knoxville, Tennessee, is also named for him.