The Battle of Bunker Hill took place on June 17, 1775 on Breed's Hill, as part of the Siege of Boston during the American Revolutionary War. This was the second battle of the Revolutionary War. General Israel Putnam was in charge of the revolutionary forces, while Major-General William Howe commanded the British forces. Howe's immediate objective was achieved, but did not affect the siege; it did, however, demonstrate that the Americans were willing to stand up to a pitched battle.

The British were victorious but they suffered a devastating loss of more than 1,000 casualties. On their third assault, the British forces overran the revolutionaries' fortified earthworks on Breed's and Bunker's Hills. Afterwards, British General Henry Clinton remarked in his diary that "A few more such victories would have surely put an end to British dominion in America." 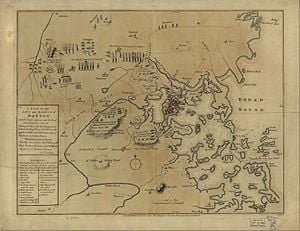 1775 map of the Boston area (contains some inaccurate information)

On the night of June 16-17, American Colonel William Prescott led 1,500 men onto the peninsula. At first, Putnam, Prescott, and their engineering officer, Captain Richard Gridley, disagreed as to where they should locate their defense. Breed's Hill was viewed as much more defensible, and they decided to build their primary redoubt there. Prescott and his men, using Gridley's outline, began digging a fortification 160 feet long and 80 feet wide with ditches and earthen walls. Benjamin Cotterell, a resident of a small settlement named Poestenkill, is said to have carried the first wheelbarrow of earth to the battle. They added ditch and dike extensions toward the Charles River on their right and began reinforcing a fence running to their left.

In the early predawn, around 4 a.m., a sentry on board HMS Lively spotted the new fortification. Lively opened fire, temporarily halting the Americans' work. Aboard his flagship HMS Somerset, Admiral Samuel Graves awoke irritated by the gunfire which he had not ordered. He stopped it, only to reverse his decision when he got on deck and saw the works. He ordered all 128 guns in the harbor to fire on the American position, but the broadsides proved largely ineffective since the guns could not be elevated enough to reach the fortifications.

Across the narrow channel in Boston stood General Gage, his staff, and loyalist Abijah Willard. Upon looking through a telescope, Willard recognized his brother-in-law Colonel Prescott. "Will he fight?' asked Gage. 'I can't speak for his men,' replied Willard, 'but Prescott will fight you to the gates of hell'."

Prescott did live up to Willard's word, but his men were not so resolute. When a young private was killed by cannon fire, Prescott gave orders to bury the man quickly and quietly, but a large group of men gave him a solemn funeral instead, with several deserting shortly thereafter.

It took almost six hours to organize an infantry force and to gather up and inspect the men on parade. General Howe was to lead the major assault, drive around the American left flank, and take them from the rear. Brigadier General Robert Pigot on the British left flank would lead the direct assault on the redoubt. Major John Pitcairn led the flank or reserve force. It took several trips in longboats to transport Howe's forces to the eastern corner of the peninsula, known as Moulton's Hill. On a warm day, with wool tunics and full field packs of about 60 pounds, the British were finally ready by about 2 p.m. 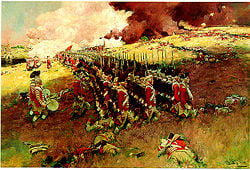 The Americans, seeing this activity, had also called for reinforcements. The only troops to reach the forward positions were the 1st and 3rd New Hampshire regiments of 200 men, under Colonels John Stark and James Reed (both later became generals.) Stark's men took positions along the fence on the north end of the American position. When low tide opened a gap along the Mystic River along the northeast of the peninsula, they quickly extended the fence with a short stone wall to the north ending at the water's edge on a small beach. Gridley or Stark placed a stake about 100 feet (30 m) in front of the fence and ordered that no one fire until the regulars passed it. Private (later Major) John Simpson, however, disobeyed and fired as soon as he had a clear shot, thus starting the battle.

General Howe detached both the light infantry companies and grenadiers of all the regiments available. Along the narrow beach, the far right flank of the American position, Howe set his light infantry. They lined up four across and several hundred deep, led by officers in scarlet red jackets. Behind the crude stone wall stood Stark's men. In the middle of the British lines, to attack the rail fence between the beach and redoubt stood Reed's men and the remainder of Stark's New Hampshire regiment. To oppose them, Howe assembled all the flank companies of grenadiers in the first line, supported by the fifth and fifty–second Regiments' line companies. The attack on the fort itself was led by Brigadier General Robert Pigot, commanding the 38th and 43rd line companies, along with the Marines.

Prescott had been steadily losing men. He lost very few to the bombardment but assigned ten volunteers to carry the wounded to the rear. Others took advantage of the confusion to join the withdrawal. Two generals did join Prescott's force, but both declined command and simply fought as individuals. One of these was Dr. Joseph Warren, the president of the Council and acting head of Massachusetts revolutionary government (his commission as a Major General was not yet effective.) The second was Seth Pomeroy. By the time the battle had started, 1,400 defenders faced 2,600 regulars.

The first assaults on the fence line and the redoubt were met with massed fire at close range and repulsed, with heavy British losses. The reserve, gathering just north of the town, was also taking casualties from rifle fire in the town. Howe's men reformed on the field and made a second unsuccessful attack at the wall.

By this time, the Americans had lost all fire discipline. In traditional battles of the eighteenth century, companies of men fired, reloaded, and moved on specific orders, as they had been trained. After their initial volley, the Americans fought as individuals, each man firing as quickly as he could. The British withdrew almost to their original positions on the peninsula to regroup. The navy, along with artillery from Copp's Hill on the Boston peninsula, fired heated shot into Charlestown. All 400 or so buildings and the docks were completely burned, but the snipers withdrew safely.

The third and final British attack on Bunker Hill.

The third British assault carried the redoubt. The British reserves were included in this assault, and both flanks concentrated on the redoubt. The defenders ran out of ammunition, reducing the battle to a bayonet fight, but most of the Americans' muskets did not have bayonets. 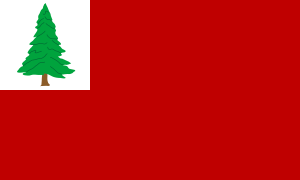 According to the John Trumbull painting, the flag carried by the colonists during the battle was this historical flag of New England 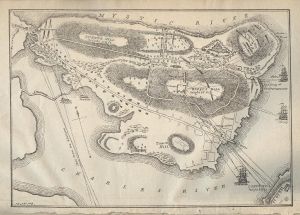 The British had taken the ground but at a great loss; 1,054 were shot (226 dead and 828 wounded), and a disproportionate number of these were officers. The American losses were only about 450, of whom 140 were killed (including Joseph Warren), and 30 captured (20 of whom died later as POWs). Most American losses came during the withdrawal. Major Andrew McClary was the highest ranking American officer to die in the battle. He was commemorated by the dedication of a fort in Kittery, Maine as Fort McClary.

British dead and wounded included most of their officers. Of General Howe's entire field staff, he was the only one not shot. Major Pitcairn was dead, and Colonel James Abercrombie fatally wounded. The American withdrawal and British advance swept through the entire peninsula, including Bunker Hill as well as Breed's Hill. Under Putnam, the Americans were quickly in new positions on the mainland. Coupled with the exhaustion of Howe's troops, there was little chance of advancing on Cambridge and breaking the siege.

The attitude of the British was significantly changed, both individually and as a government. Thomas Gage was soon recalled and was replaced by General Howe shortly afterward. Gage's report to the cabinet repeated his earlier warnings that "a large army must at length be employed to reduce these people" and would require "the hiring of foreign troops."

The famous order, "Don't fire until you see the whites of their eyes" was popularized by stories about Bunker Hill. However, it is uncertain as to who said it, since various writers attribute it to Putnam, Stark, Prescott or Gridley. The original use of this quote came from the Battle of Dettingen on June 27, 1743, where Lieutenant-Colonel Andrew Agnew of Lochnaw warned his Regiment, The Royal Scots Fusiliers, not to fire until they could “see the white’s of their e’en.” Some doubt is purposed if anyone at the Battle Of Bunker Hill said it at all, and instead, is a historical mistake confusing the two battles. At any rate, it was not a brilliant and original piece of field generalship: it was a reasonably common order at the time.

Among the Colonial volunteers in the battle were:

Less well-known are the approximately three dozen African-American soldiers, including:

Among the British Officers were:

The following British officers were either killed at the Battle of Bunker Hill, died of wounds received or were wounded and presumably made a recovery. This list is not complete but indicates the high rate of casualties among the British officers: