Howard Pyle (March 5, 1853 – November 9, 1911) was an influential American illustrator, who is sometimes referred to as the "Father of American Illustration." A native of Wilmington, Delaware, he opened an art school in his hometown where he taught other illustrators, including protégé, N. C. Wyeth. During the Golden Age of Illustration, Pyle, along with many illustrators trained by him, brought the printed word to life through their vivid descriptions of pirates, fair maidens and other medieval characters, such as the legendary Robin Hood.

Pyle was also a prolific writer who authored and illustrated over 24 books, mostly for children, including the four part series, The Story of King Arthur and His Knights. While his attention to historical accuracy can be seen in his works depicting Revolutionary War themes, (see Thomas Jefferson Writing the Declaration of Independence, Scribner's 1898), his paintings also reflect Americans' love for adventure that was so popular at the turn of the century before the advent of movies, and television.

His mother had a great influence on him when she rejected the Quaker strictures against imagination and instead embraced Swedenborg's philosophy that imagination could be useful.[1]

Howard Pyle was born in Wilmington, Delaware in 1853, the same year as Vincent Van Gogh. His father William Pyle was the owner of a leather business. His mother was Margaret Churchman Painter Pyle. By all accounts his childhood was "bright and happy." His mother instilled in him a love for adventure books reading to him from such classics as Robinson Crusoe, the Pilgrim's Progress, Grimm's Fairy Tales, and The Arabian Nights. 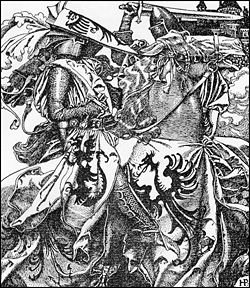 "Sir Kay breaketh his sword at ye Tournament," one of Pyle's Arthurian illustrations.

Pyle's family was steeped in Quaker tradition, and the young Pyle attended the Friends School. However he was a nontraditional student who did not fare well in the classroom. Consequently he left school at the age of 16 to begin three years of daily commutes to study at an art school in Philadelphia under the tutelage of Belgian artist F.A. Van der Wielan. These classes would be the only systematic training in art that Pyle would receive and provided a solid foundation in the technique of drawing.

In the 1870s Pyle served a short stint at the Art Students League in New York City. Many of his early illustrations appeared in magazines such as Harper's Weekly and Colliers. In 1880 he returned to Wilmington, Delaware, already an established illustrator. As one critic said of Pyle, "His rapid rise to popularity was due to his remarkable gift for seizing and expressing the dramatic gist of a story."[2]

In 1881, Pyle married Anne Poole. Together the couple had seven children. In 1889 while he and his wife were vacationing in Jamaica their seven-year-old son died unexpectedly. Pyle's book The Garden Behind the Moon, was a fairy tale written in response to that death and about the need to find acceptance.

In 1894 he began teaching illustration at the Drexel Institute of Art, Science and Industry (now Drexel University in Philadelphia). His students at Drexel included Jessie Wilcox Smith, Elizabeth Shippen Green and Maxfield Parrish. In 1900 he founded his own school of art and illustration (later called the Brandywine School) in Wilmington, Delaware. Drawing on his love for pastoral settings and the history of the Chadds Ford Valley he cultivated a small group of elite students at his school. Among them was N. C. Wyeth who became a renowned illustrator and artist in his own right.

In 1905 Pyle became interested in mural painting which was popular at the turn of the century for decorating new public buildings. He began by painting seven panels of various sizes in his own home. His first mural commission, The Battle of Nashville for the governor's reception room in the Minnesota State Capitol building, was completed in 1906. The architect, Cass Gilbert, was so pleased with this mural that he asked Pyle to design an even larger mural for the new Essex County Courthouse in Newark, New Jersey. The Landing of Cartaret was completed in 1907. Pyle's most ambitious mural project was for the Hudson County Courthouse in Jersey City, New Jersey, and included five panels of historical subjects: Life in an Old Dutch Town, Hendryk Hudson and the Half-Moon, Peter Stuyvesant and the English Fleet, Dutch Soldier, and English Soldier.[3]

In 1910 he ventured to Europe to study the Great Masters of mural design. He became ill while in Florence, Italy and suddenly passed away in 1911, purportedly of Bright's Disease, the same affliction that took the life of poet Emily Dickinson.

He left unfinished on his easel the painting, The Mermaid, which was eventually finished by one of his students, Frank Schoonover. The large work is one of the highlights of his collection, housed at the Delaware Art Museum. Painted in shimmering turquoise hues, it shows a shipwrecked sailor being comforted by a visiting mermaid. The opposing forces of weak and strong, human versus nonhuman are poignantly illustrated. Pyle, himself, was fascinated with the idea of a "mysterious stranger" or visitations from the world beyond.

In many of his books he used illustrations of angels as chapter heads to exemplify moral themes or ideas from the chapters. These drawings include Arthurian angels from his version of Mallory, woodcut angels from Otto of the Silver Hand, and angelic figures from The Wonder Clock. Some of these angels are benevolent and some are stern or even somewhat frightening, but they are all executed in Pyle's own unique style.[4]

In another fantastical piece, a painting over six feet in height called The Flying Dutchman, shows a wild eyed sailor who, along with his crew, was condemned to sail perpetually around the Cape of Good Hope, only able to land ashore every seven years in order to seek a faithful woman who could break the curse.

Marooned, a picture of abject desolation was painted at Rehobeth Beach, Delaware. It shows a pirate exiled from his crew for breaking the "pirate's code" of honor.

Author as well as illustrator 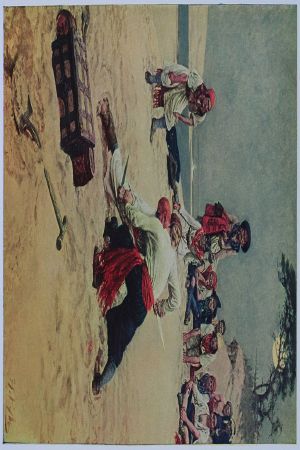 Pirates fight over treasure in a Howard Pyle illustration from Howard Pyle's Book of Pirates.

In addition to his numerous illustrations for periodicals and for children's books such as Robert Louis Stevenson's Dr. Jekyll and Mr. Hyde, Pyle wrote and illustrated a number of books based on classic tales from his own childhood.

In 1883 Pyle published one of his best-known works, The Merry Adventures of Robin Hood of Great Renown in Nottinghamshire. He had first conceived of this project while in New York City where he had hoped to sell stories and illustrations based on the legendary outlaw to the children's magazine St. Nicholas. His main literary source was Joseph Ritson's 1795 collection of Robin Hood ballads. As became his custom throughout his career he created (or re-created) not just the stories but the whole book: text, illustrations, and even a form of calligraphy featured in headings and captions.

In Pyle's version of Robin Hood the story was modified to make it more suitable reading for the children's audience he appealed to. "Robin Hood's Progress to Nottingham," was changed from Robin killing fourteen foresters for not paying on a bet, to the robbers threatening Robin. In Pyle's version Robin kills only one man and that is only in self defense. Tales where Robin steals all that a traveler carried, such as "Robin Hood and the Bishop of Hereford," were changed so that the victim keeps a third, and another third is bequeathed to the poor. Indeed, none of the tales in the book were Pyle's own invention. Instead, he wove the classic tales together to form a unified story.

Pyle often re-wrote these folk tales giving the heroes more leadership qualities and virtuous traits in keeping with the American Dream - goals and values highly sought by Americans particularly after World War I.

Pyle also wrote Otto of the Silver Hand, a story about the life of the son of a robber baron in the Dark Ages.

A number of pirate legends were compiled posthumously into the volume, Howard Pyle's Book of Pirates.

His book Men of Iron was made into a movie in 1954, The Black Shield of Falworth starring Tony Curtis and Janet Leigh.[5]

Pyle's oft-quoted advice to his students was, Throw your heart into the picture and then jump in after it. One biographer has described Pyle as having, fought, sang, struggled and sobbed through his work. [6]. Like fellow illustrator Norman Rockwell he paid close attention to historical detail and often painted live models wearing period costumes. (While Rockwell later turned to painting from photographs, this medium was not yet developed during Pyle's era.)

Pyle published some 3,300 illustrations during his 35 year career. Many of his stories, such as the series of adventure tales from the legends of King Arthur, he self-illustrated. He is also remembered for the nurturing of young artists who went on to become commercially successful in their own right; artists such as N. C. Wyeth and Maxfield Parrish.

Pyle was drawn to the classics of his youth and returned again and again to themes of chivalry, courtship at the turn of the century, and embattled soldiers of the Revolutionary War period. His work is striking for its realism, its vivid colors and for its masterful historical detail.

Pyle influenced not only children's literature and the course of American graphic art but he also popularized the Anglo-Saxon myths and legends for American audiences. His standards of excellence and quality of illustration and story telling are still well regarded by the artistic establishment today. [7]

The Delaware Art Museum, founded after Pyle's death largely for the purpose of exhibiting his paintings and preserving his legacy, is home to the largest collection of Howard Pyle's work.

The four volume Arthurian legends are comprised of: