Newell Convers Wyeth (October 22, 1882 – October 19, 1945), known as N. C. Wyeth, was an American artist and illustrator. He was the star pupil of Howard Pyle's art school in Wilmington, Delaware and went on to become one of America's greatest illustrators. During the "golden age of illustration" he created nearly 4,000 works over a period from 1903 to 1945.

In 1911 he gained national recognition with his illustrations for the book Treasure Island by Robert Louis Stevenson and is probably best remembered for his illustrations of other children's classics done for Scribner's.

Wyeth brought to life American stories and themes, from carpetbaggers to Indians. His brilliant use of color and romantic imagery combined with his close attention to historical detail gives his artwork a lasting place in the lexicon of American illustration.

He was the father and founder of an artistic dynasty that includes son Andrew and grandson Jamie.

His love for America—its individuality and its landscapes—is clearly evident in his works, from the Old West to the "Brandywine Hill" country of Chadds Ford, Pennsylvania. His bold and sometimes massive artwork is said to express his "largeness of spirit"; one biographer said of Wyeth, "He painted murals on a heroic scale." (Allen and Allen 1972) 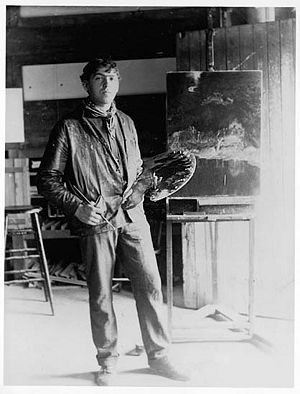 Newell Convers Wyeth was born in Needham, Massachusetts on October 22, 1882. His grandparents were Swiss immigrants and N.C. himself grew up on a farm surrounded by immigrant values and customs. He attended Mechanic Arts High School in Boston through May 1899, concentrating on drafting. With his mother's support he transferred to Massachusetts Normal Art School, and there instructor Richard Andrews urged him toward illustration. His mother, Henriette Zirngiebel Wyeth, encouraged his artistic talent while conversely, his father Andrew Newell Wyeth II, called an artist's life "shiftless, almost criminal." Ironically, while his maternal grandmother never overcame her homesickness or attachment to the "old country," Wyeth remarked to his mother that he wanted to paint "true, solid American subjects—with nothing foreign about them." (Michaelis 1999)

In 1902 Wyeth left Needham to attend the Howard Pyle School of Art in Wilmington, Delaware. Pyle was one of the country's most renowned illustrators. He left a teaching position at Drexel Institute of Art, Science and Industry in Philadelphia to open his own school of illustration. There Wyeth was to meet his future wife, Carolyn Bockius, whose family lived three blocks from the Pyle Studios on Gilpin Avenue. According to Wyeth's biographer, "By all accounts she was the prettiest girl in Wilmington." (Michaelis 1999)

N. C. Wyeth and Carolyn B. Bockius were married in April 1906 and, drawn to the pastoral settings and historical ambiance of the "Brandywine River Valley," moved to Chadds Ford, Pennsylvania in 1908. In 1911 they bought 18 acres there and would raise five talented children on that property.

His three trips between 1904 and 1906 to the western United States inspired a period which produced illustrations of cowboys and Native Americans that dramatized the Old West.[1] Wyeth's travels were inspired by those of renowned American West artist, Frederic Remington, whom he had admired as a child.

Wyeth's pictures of Native Americans from this period show their unique and solitary relationship to nature. One of his most popular was of a woodland Indian, titled, The Moose Call, painted in 1904. Pictures from the "Indian in His Solitude Series" were printed in a 1907 issue of Outing magazine.

Like American illustrator Norman Rockwell, Wyeth found early success producing illustrations for The Saturday Evening Post. Only five months after starting in Pyle's art school, a painting of a bucking bronco done for the cover of the February 21st, 1903 magazine was Wyeth's first commission as an illustrator. He also gained national recognition for his illustrations for Scribner's Classic Children's Books including special editions of The Yearling (by Marjorie Kinnan Rawlings), Robinson Crusoe (by Daniel Defoe), The Last of the Mohicans (by James Fenimore Cooper), Kidnapped (by Robert Louis Stevenson), and Robin Hood (by Paul Creswick). 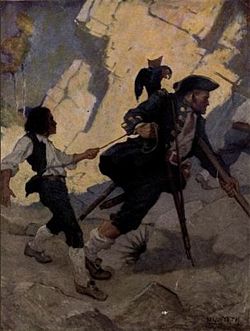 The Hostage by N.C. Wyeth, 1911, for Treasure Island by Robert Louis Stevenson

His pictures appeared in many of the most popular magazines of the period, such as Century, Harper's Monthly, Ladies' Home Journal, and McClure's.

Wyeth's oeuvre also contains religious paintings. In 1923 he was commissioned by the Unitarian Layman's League to do a series of paintings titled "The Parables of Jesus." His most magnificent religious work is considered his triptych (consisting of three hinged panels) painted for the Chapel of the Holy Spirit at the National Cathedral in Washington, D.C. Jesus, surrounded by a host of heavenly angels, seems to be welcoming his believers: "Come Unto Me, All Ye that Labor and Are Heavy Laden, and I Will Give You Rest." (Allen and Allen 1972)

N. C. Wyeth's life and career were tragically cut short when he and his grandson (Nathaniel C. Wyeth's son) were killed in a car accident at a railway crossing near his Chadds Ford home in 1945.

Wyeth's mentor and teacher, Howard Pyle, was a proponent of the idea of "mental projection." He would instruct his students, "You must live in the picture." Later, expounding on this idea with his own students, Wyeth would admonish, "Don't just paint a sleeve, become the arm!" (Allen and Allen 1972)

He used himself as a model because he felt that growing up on a farm gave him a sense of bodily action—how the body looks and how it moves. Through the sheer power of his imagination he put himself into the scenes of his stories, whether it be Sherwood Forest (Robin Hood) or King Arthur's Court.

Wyeth once reflected on his sustained interest in art as a youth: "I was quiet and my mother said I was observant, but I saw things as they were, and not as the fairy tales paint them...." Wyeth was a realist painter just as the camera and photography began to compete with his craft.[2] Sometimes seen as melodramatic, his illustrations were designed to be understood quickly.[3] Wyeth, who was both a painter and an illustrator, commented once on the perpetual debate about whether illustration is "true" art, saying simply, "...you've got to be an artist before you can be an illustrator." (Allen and Allen 1972) 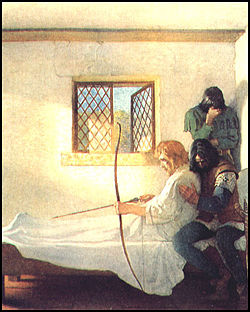 As head of the Wyeth family of painters who live and work in picturesque Chadds Ford, Pennsylvania, his life is "larger than his accomplishments."

One of largest single murals in the United States, painted in 1932, is Apotheosis of the Family, which contains likenesses of Wyeth's own family members. It is 19 feet high by 60 feet long and mounted in five sections. It spans the entire south wall of the Wilmington Savings Fund Society Building in Wilmington, Delaware.

In a 2002 episode of the TV show Antiques Roadshow, a Wyeth painting in excellent condition, believed to be titled When He Comes He Shall Rule the World, was appraised to be worth as much as $250,000. The painting was done to illustrate a story in Harper's Monthly magazine called The Lost Boy, by Henry van Dyke.[4]

Significant public collections of Wyeth's work are on display at the Brandywine River Museum in Chadds Ford and the Farnsworth Art Museum in Rockland, Maine.

Retrieved from https://www.newworldencyclopedia.org/p/index.php?title=N._C._Wyeth&oldid=1086852
Categories:
Hidden category:
This page was last edited on 10 November 2022, at 22:57.
Content is available under Creative Commons Attribution/Share-Alike License; additional terms may apply. See Terms of Use for details.